Making It Personal: 'Skylanders Imaginators' Looks to Move the Series into a World of Custom Imagination

Editor's Note: Impressions based of 'Skylanders Imaginators' based off a visit to developer, Toys for Bob in Navato, CA. This visit included hands-on time with a PS4 build of the new game.

Bringing the Imaginators to Life

A span of years, multiple installments, and hundreds of Skylanders stand between Toys for Bob and the beginning of the Toys-to-Life genre that they created. During that time, countless fans of all ages have been asking for a feature as pervasive and fundamentally enabling as it gets, the ability for players to create their own Skylanders. 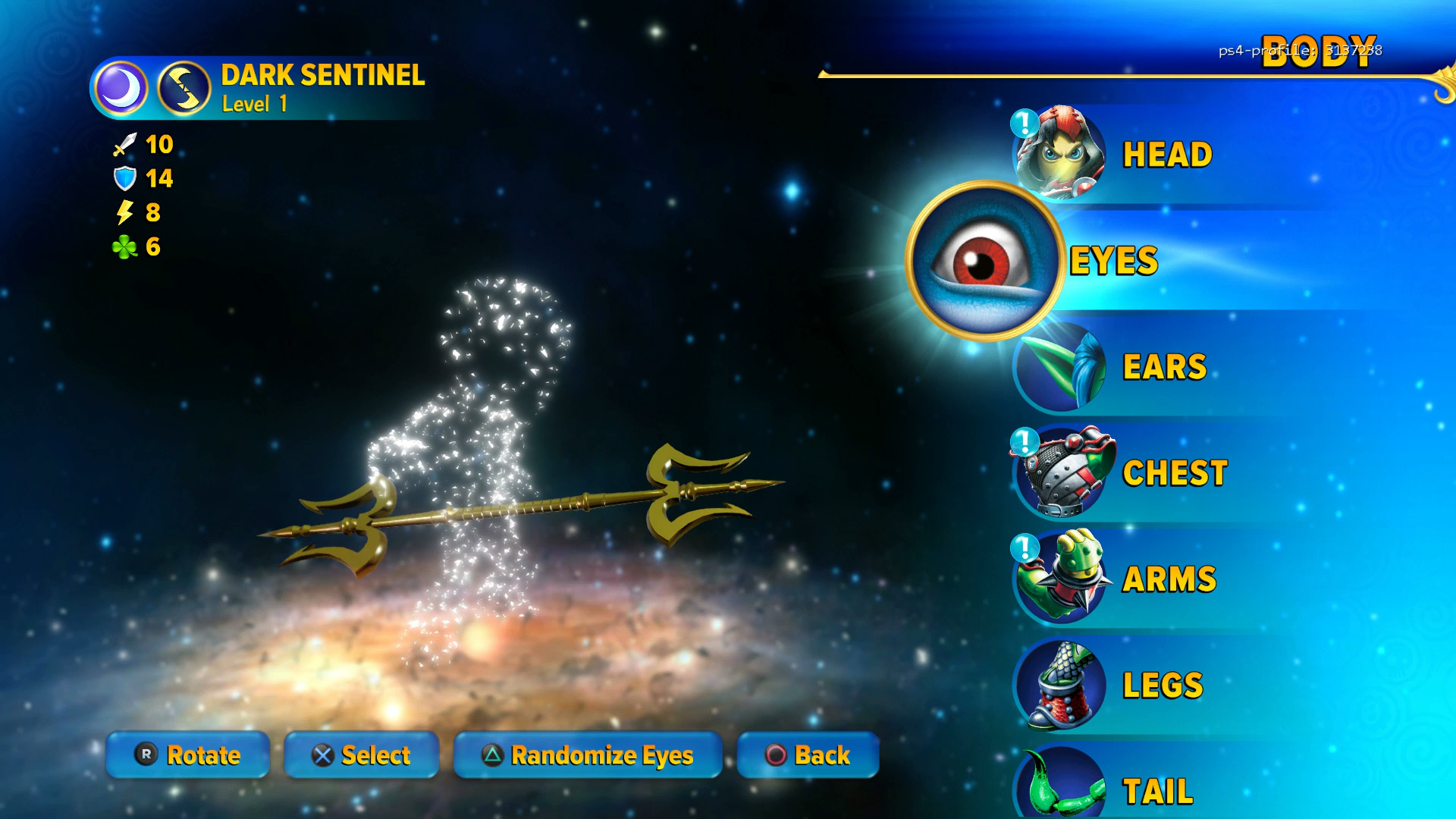 Making this happen for 'Skylanders Imaginators' was a project goal of the highest importance, but it was something that needed to achived while at the same time, not forgetting everything that the franchise routinely delivers. For my part, I was a bit surprised to find that the kind of toolset employed in game to make an 'Imaginator' had to be developed from scratch. The Skylander figures and characters known throughout the world have traditionally been created in a very traditional way.

From 2D concepts to 3D renders to 3D prototypes to figure samples from the factory, 'Skylander' characters, including the new and imposing Sensei figures, are part of a creative pipeline that begins with concept art. While there are tweaks and changes at every stage, significant revisions, such as adding lava elements to a rocky character, or even trading tall and slim for small and round, happen on paper.

Thus, the desire to let players create their own Skylanders, required a series of prototype systems. Working with and within these systems, however, allowed the developers to key in on a couple of important aims. They figured out that the could manage a pretty insane level of customization, and that's something the most hardcore and artistic players would desire. But at the same time, it was important to make making an Imaginator something fun and accessible for the most impatient players.

For someone like me, who normally stumbles through character creators, whiling away an excess of time and then not really being happy with the locked-in results, I love that the Imaginator creation system is full of smart, thematic entails, and that I don't have to perfect the Imaginator in one session. Being able to really play with the character, see the game world, Doomlanders (and maybe even some other Imaginators), might help me with the design. 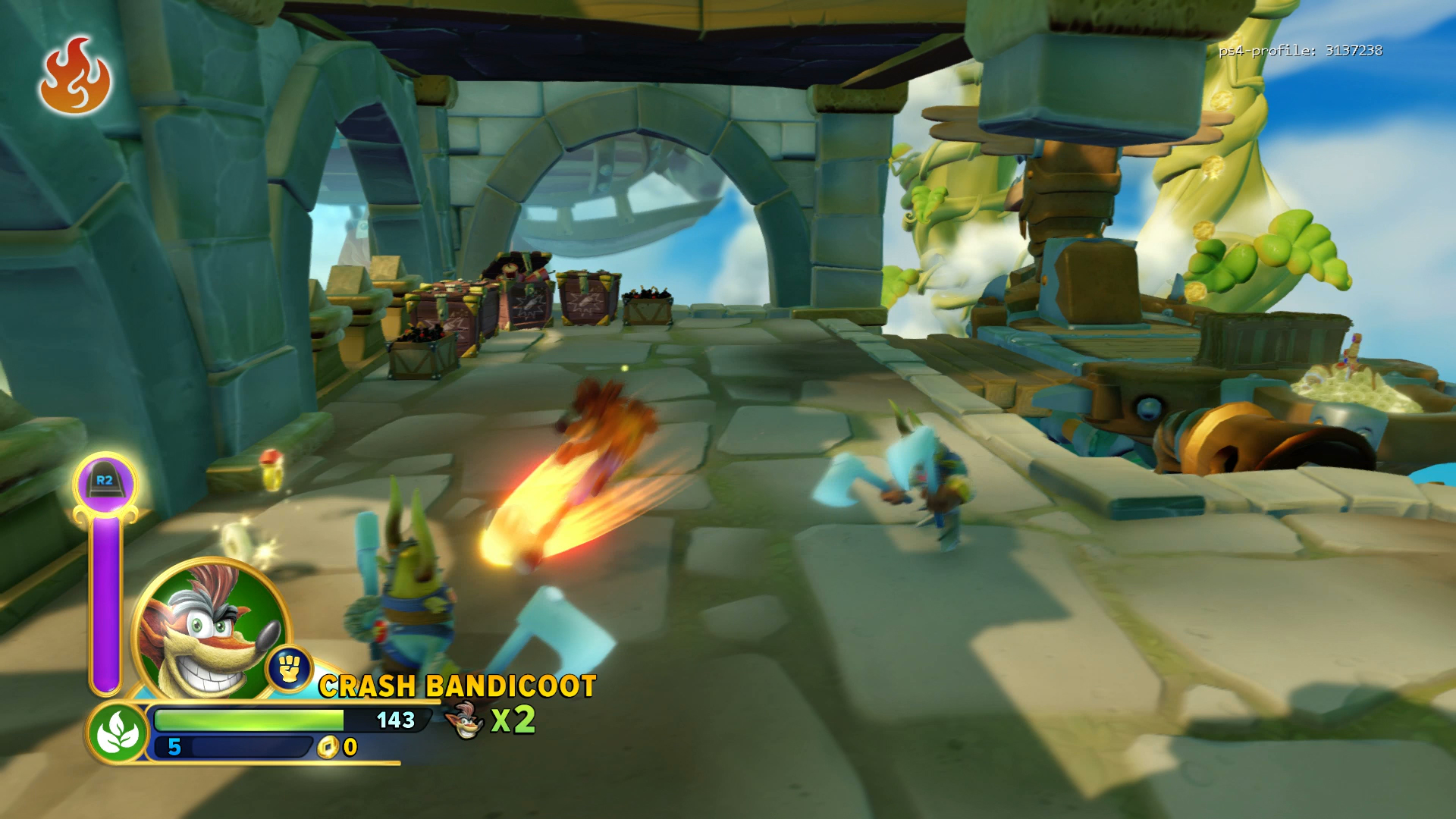 Much like I enjoyed the recent of trend of allowing players to level up and change abilities for the normal 'Skylanders,' being able to hop in, make changes, and hop out, gives me a great sense of freedom.

But the closest to an interactive character creator that Toys for Bob had prior to the one used in this game, was a PowerPoint and Excel-based Imaginators prototype that let the PowerPoint user cycle and randomize several different parts, all of which were really scanned-in concept drawings.

My Amphibian-Robot Bears a Terrible Grudge

The finished game product allows for so much more. From scaling body parts, picking colors, to adding theme music and equipping weapons, the 'Imaginator' system does an exemplary job of letting the player create something that feels unique and personal.

This can be done with rapidity if necessary as my own preview session proved. I had spent a lot of time playing with different Sanseis, including both Kaos and Crash. Dropping a Dark Creation Crystal onto the portal, however, kicked off a session that needed to happen fast for my sake. 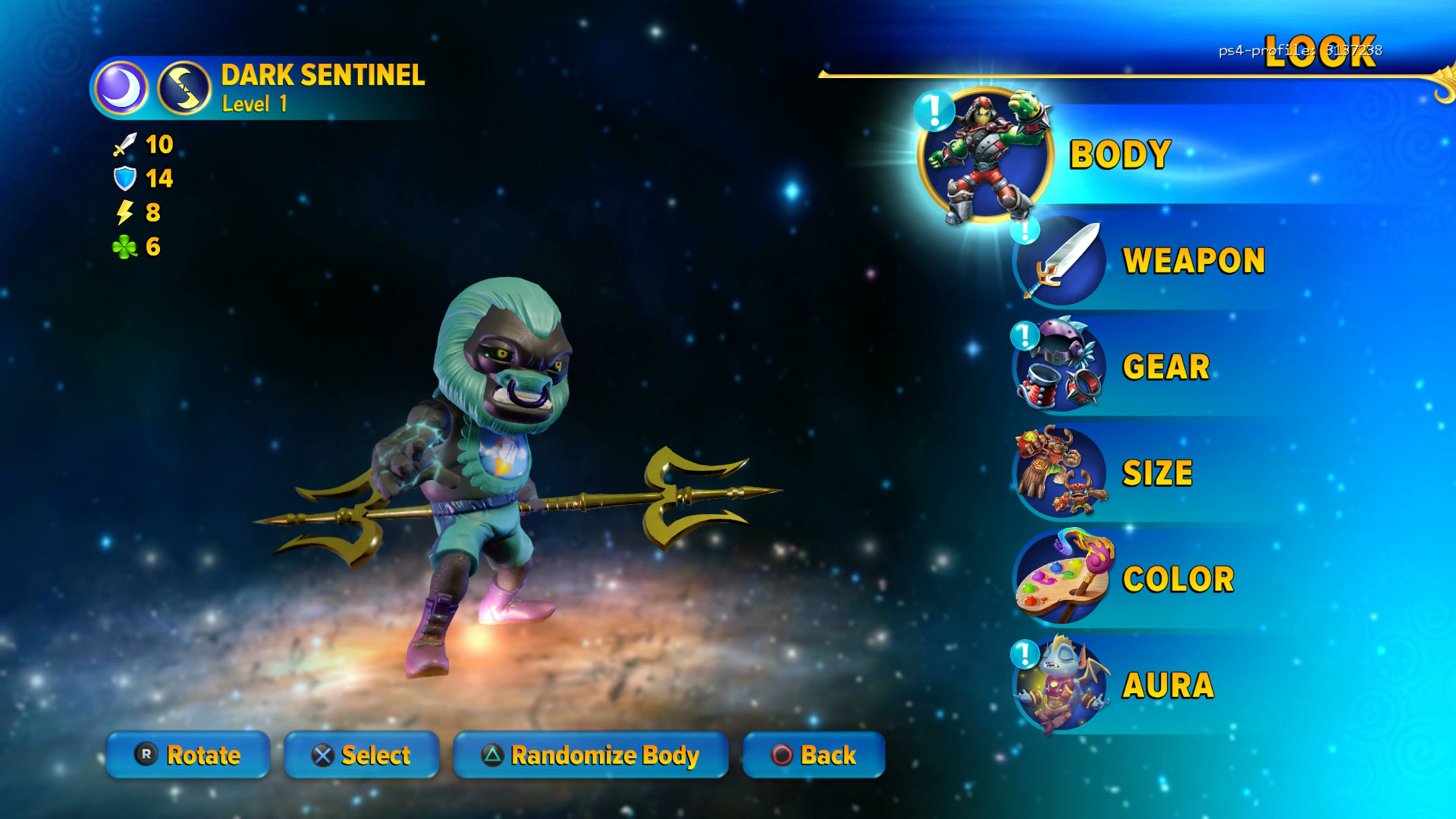 The first thing I did was pick a Battle Class. Out of the ten available (Brawler, Sentinel, Swashbuckler, Bowslinger, Smasher, Knight, Ninja, Bazooker, Quickshot, and Sorcerer), I went with the lithe Sentinel, who are notable for quick moves and double-ended weapons. What came next for my Dark Sentinel was the default form. Imaginators start out as a translucent outline made of stars. These stars weren't around for long as I began hitting randomize, creating different, strange forms (in different colors) up until I found something that caught my imagination. 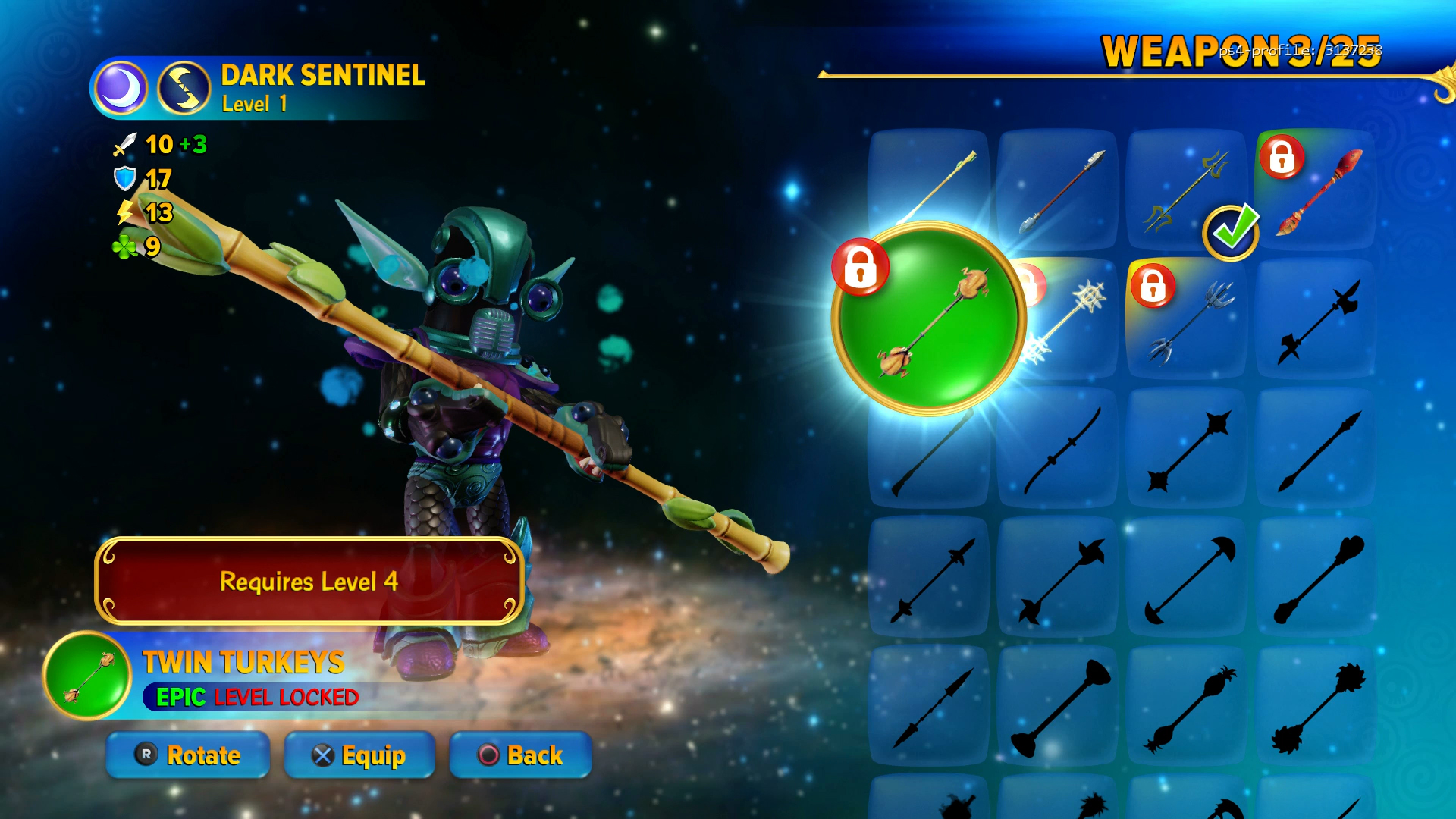 With the default double Trident of the Sentinel class, a cyborg, aquatic creature seemed like a great fit. The details, however, needed some work. I traded fatigues and boots for something a bit more Aquaman. After I saw that I could make the arms and hands into snake heads, I saw little reason to make them anything else (though the robot skeleton arms were tempting). Somewhere in my mind, I 'Slash' from 'Teenage Mutant Ninja Turtles' beckoned, so I mixed the colors up to get something similar but different (black, purple, and aqua green on a shell), I beefed up the sized of the legs, and I added some tough-looking shoulder armor pieces. (I should say that I was concerned about the look and feel more than the stats.) I liked the match of the robotic head and voice, but I went with an emitting gas/spore aura to help reinforce the exotic and organic aspects. 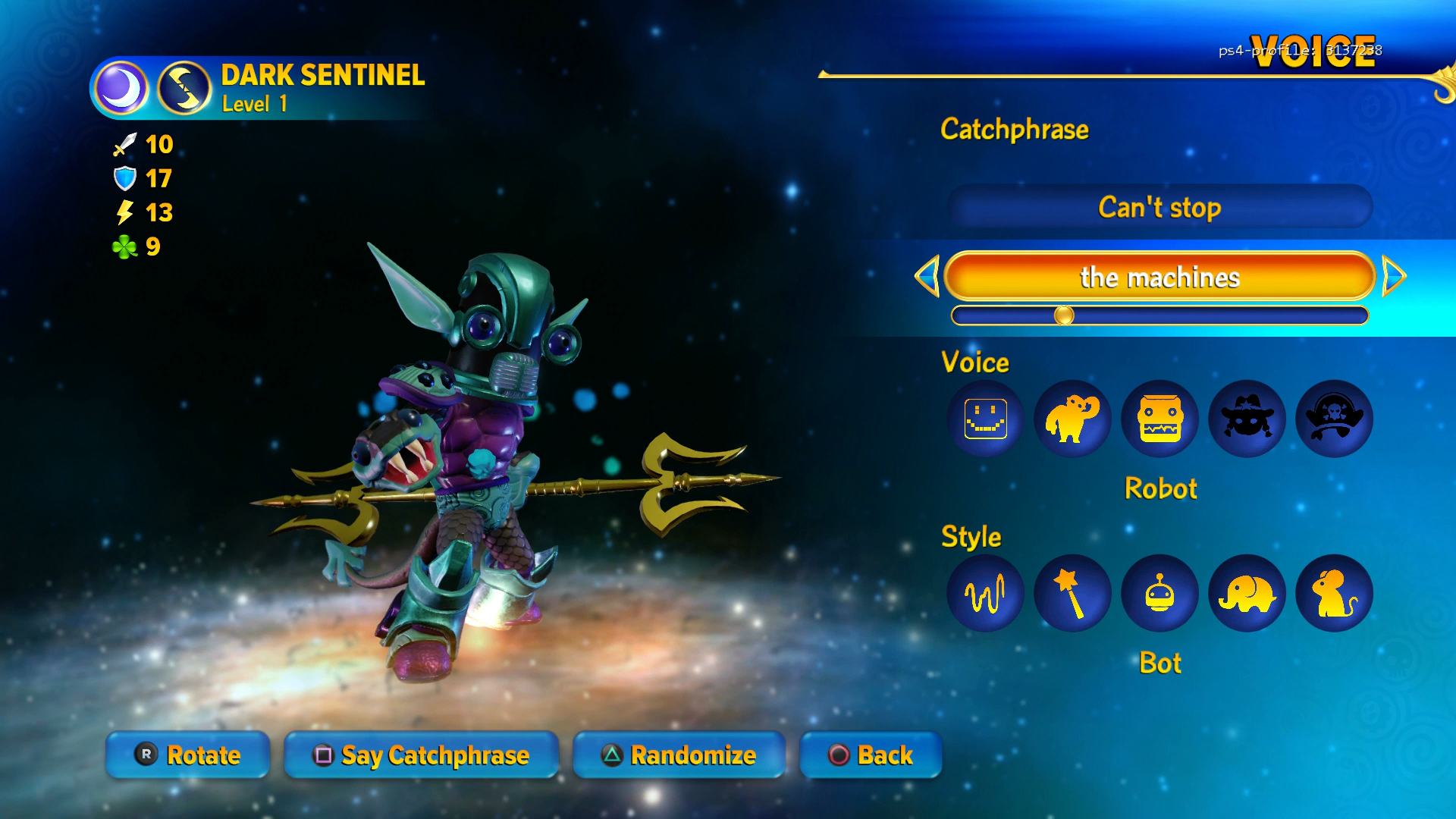 My Imaginator's "You are no match for the dark" catchphrase was pretty good, and indeed I loved all his little audio cues like "you can rebuild me better, stronger, faster," and, "I have been upgraded." But when I changed the catchphrase to "Can't stop the machines," I felt the full effect of the cold, robot voice. 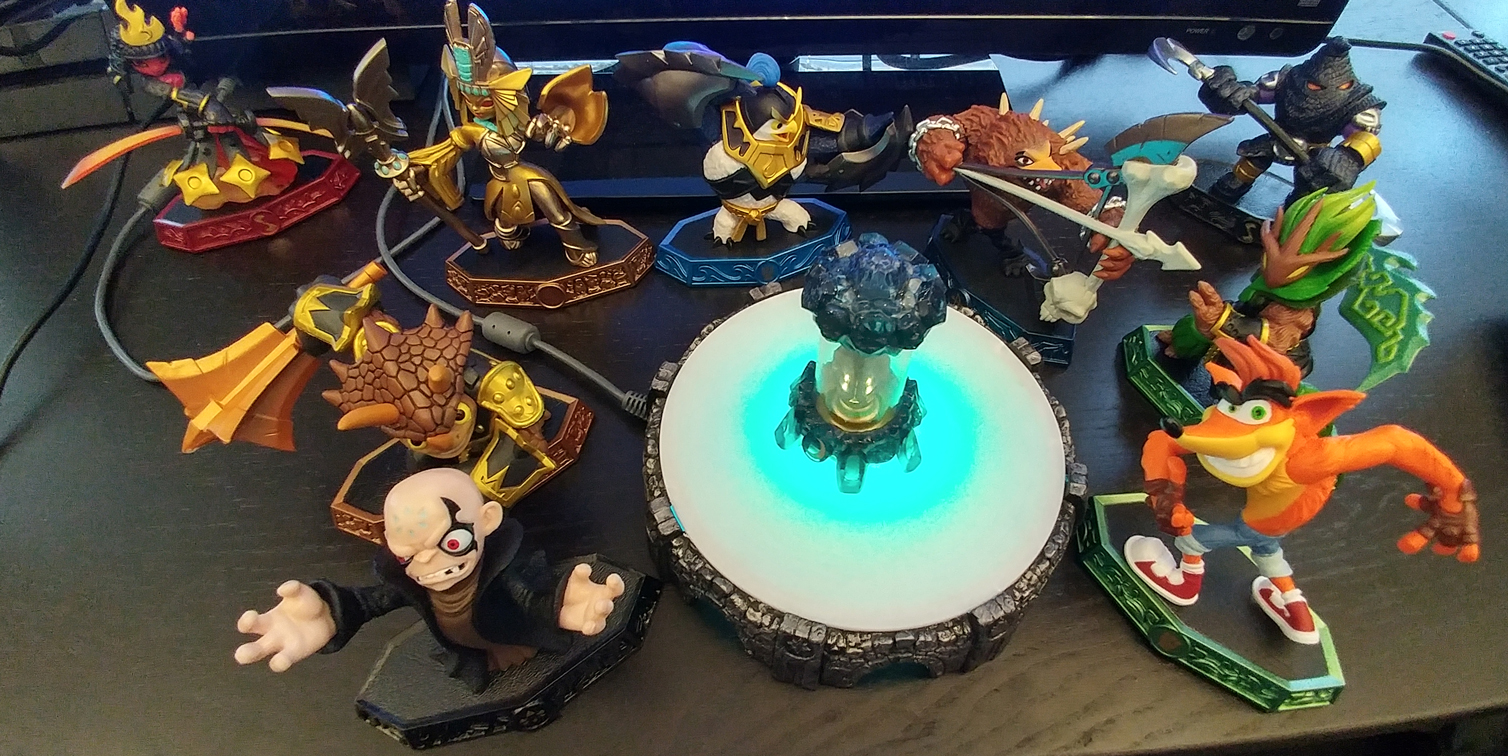 The Creation Crystal itself is easily one of the coolest things I've seen in the Toys-to-Life genre. They were going for a specimen/artifact feeling, and seeing the dark crystal within come to life on the portal, brought that little touch of creation home. The crystal gently pulsates while in use, and no doubt, that cool, lit, item under glass presentation is something that we'll see more of the future. (In fact, if I can diatribe here briefly, I was shown a pre-Imaginators prototype accessory where the pulsating effect was first used. This item has a small battery which is charged by RFID when the item is on portal. When removed, the pulsating effect continues for a while via the battery, but slows and fades to nothing. It's a very cool effect, and we joked about how the fading light just didn't make sense for the game at present.) 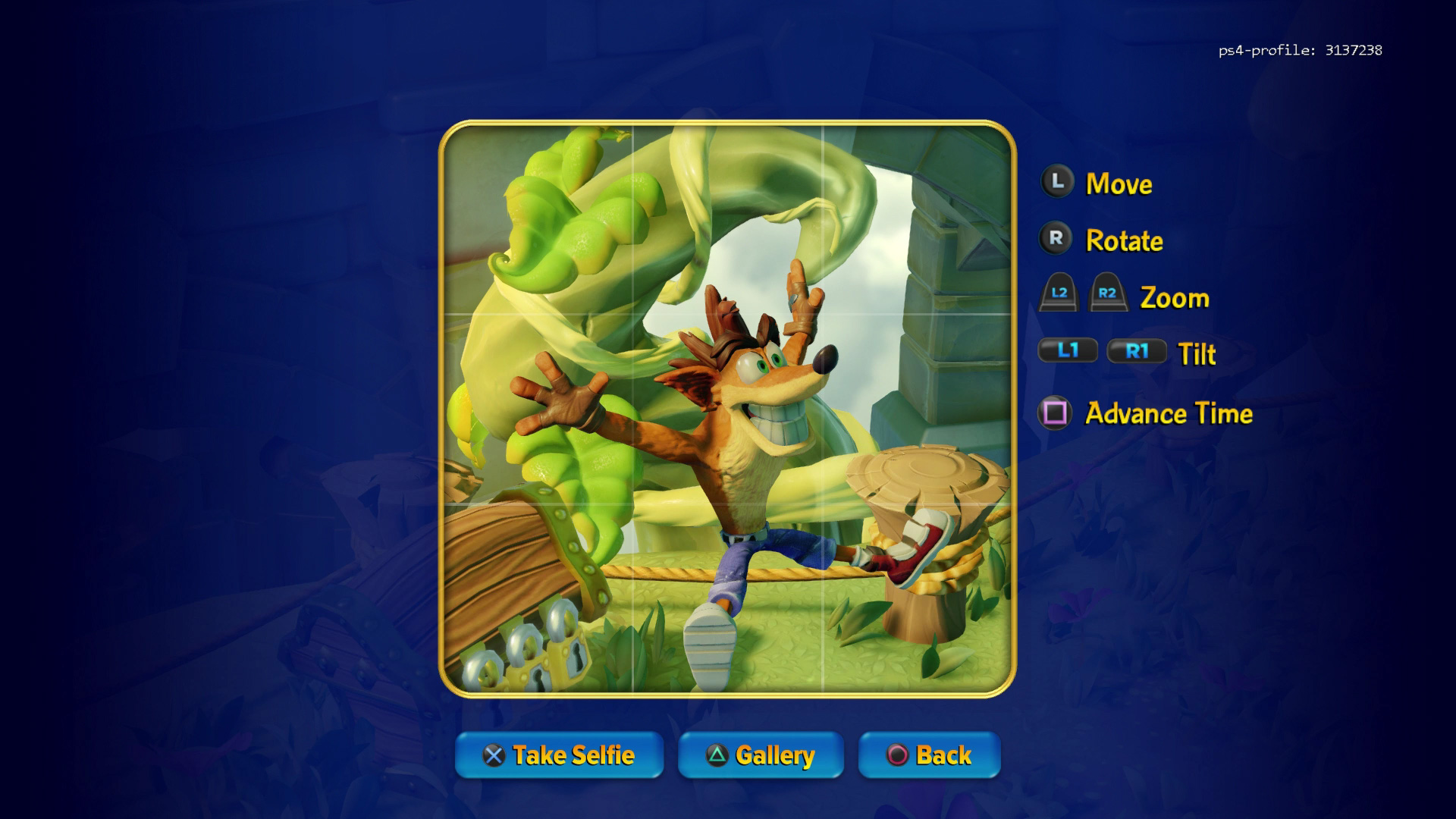 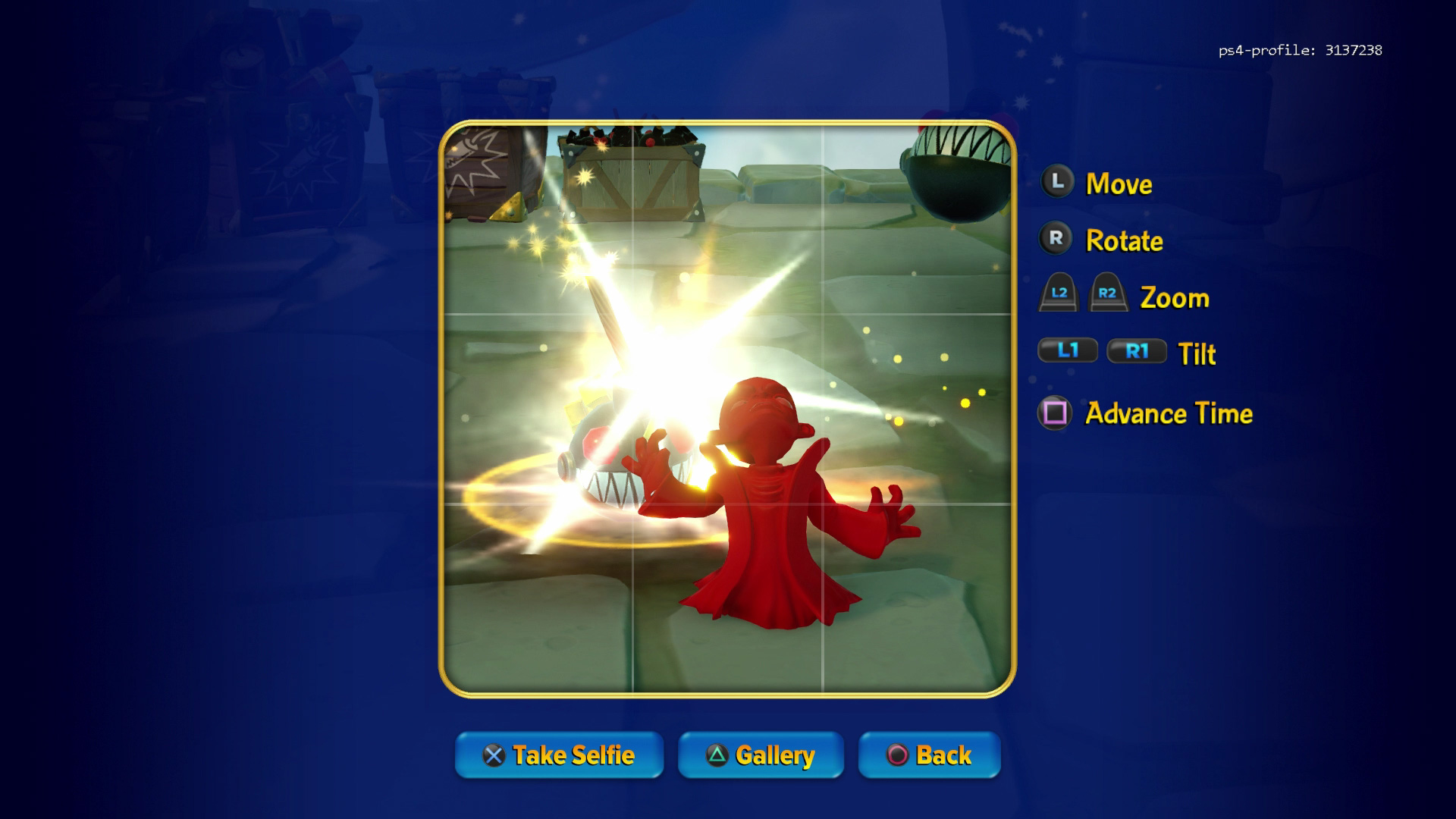 Much like when I had played with Kaos, Crash, Ember, and the other Sentinels, I had a blast using the L2 screenshot/selfie functionality. The gameplay is frozen instantly, but time can be keyframed forward step by step while in posing mode. That way, catching mid-combat poses, explosions and so forth is not simply doable, but really hard not to want to constantly do. (An unlike other photo modes, it's welcomingly quick to go in and out of.)

After creating an Imaginator, and taking cool pics, and I proceeded to tearing through a level, enjoining combat, playing minigames, exploring (and find divergent paths), and taking in story beats at regular interval. (Plus a little detour with a Sensei to take on a Sensie-exclusive Gong Battle.) Eventually, and in a hasty state, I found my query, a Bazooker Doomlander. 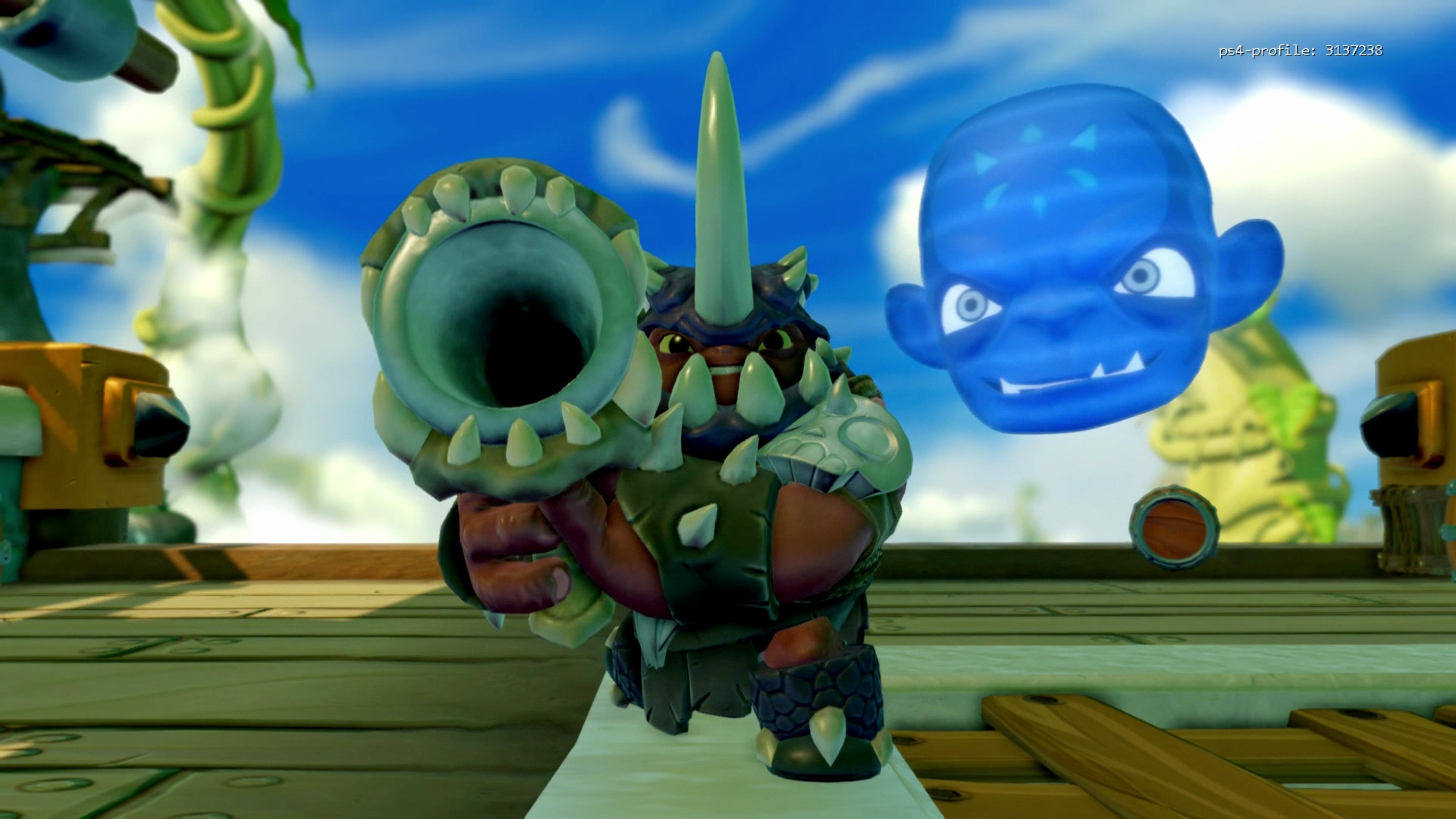 The very Rocksteady-looking creation of Kaos promptly let me know that "Nothing better than the pancake house," which caused a lurking Kaos to shake his head. As I proceeded to ruthlessly dismantle the Doomlander, Kaos continue to try to boost his champion of the moment. I eventually decided that my Imaginator was hogging all the fun (while using some great base powers), and decided to take the Creation Crystal off the Portal in favor of another Sensei, Dr. Neo Cortex. (Also, the awesome Chopscotch had walked off somewhere.) 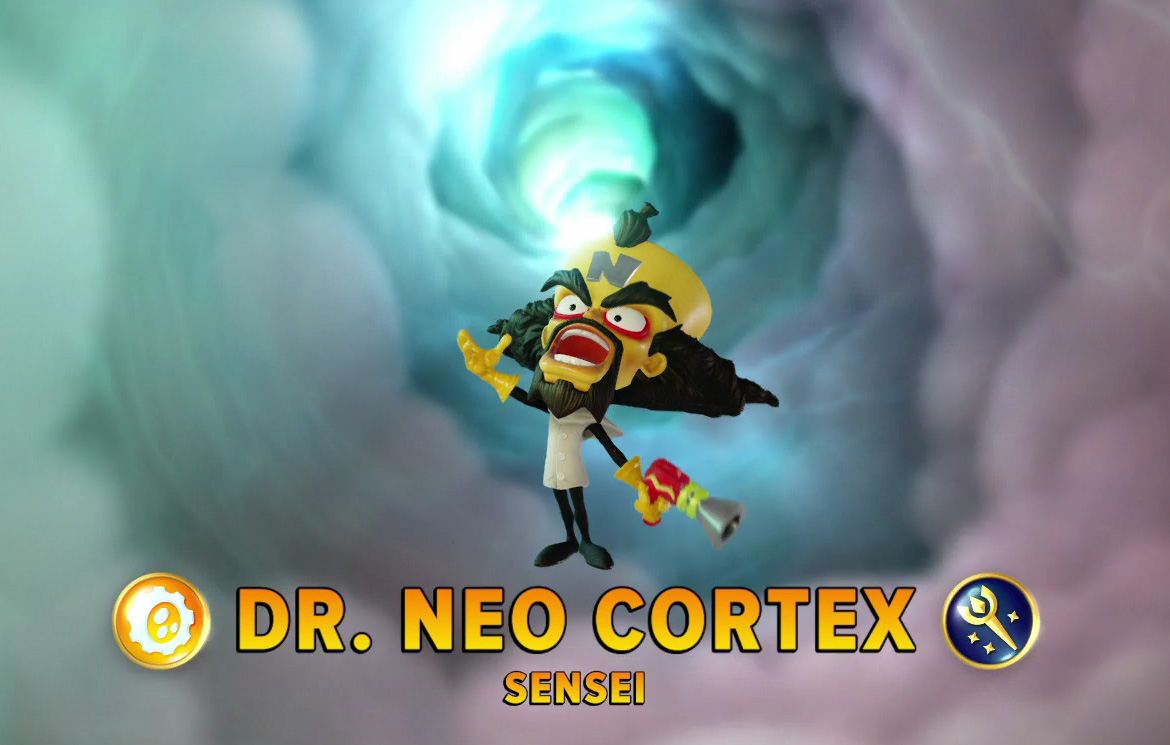 The Doomlander never stood a chance. Rifling through the post-fight fight rewards, I took in weapons, armor, and even "the pancake house." 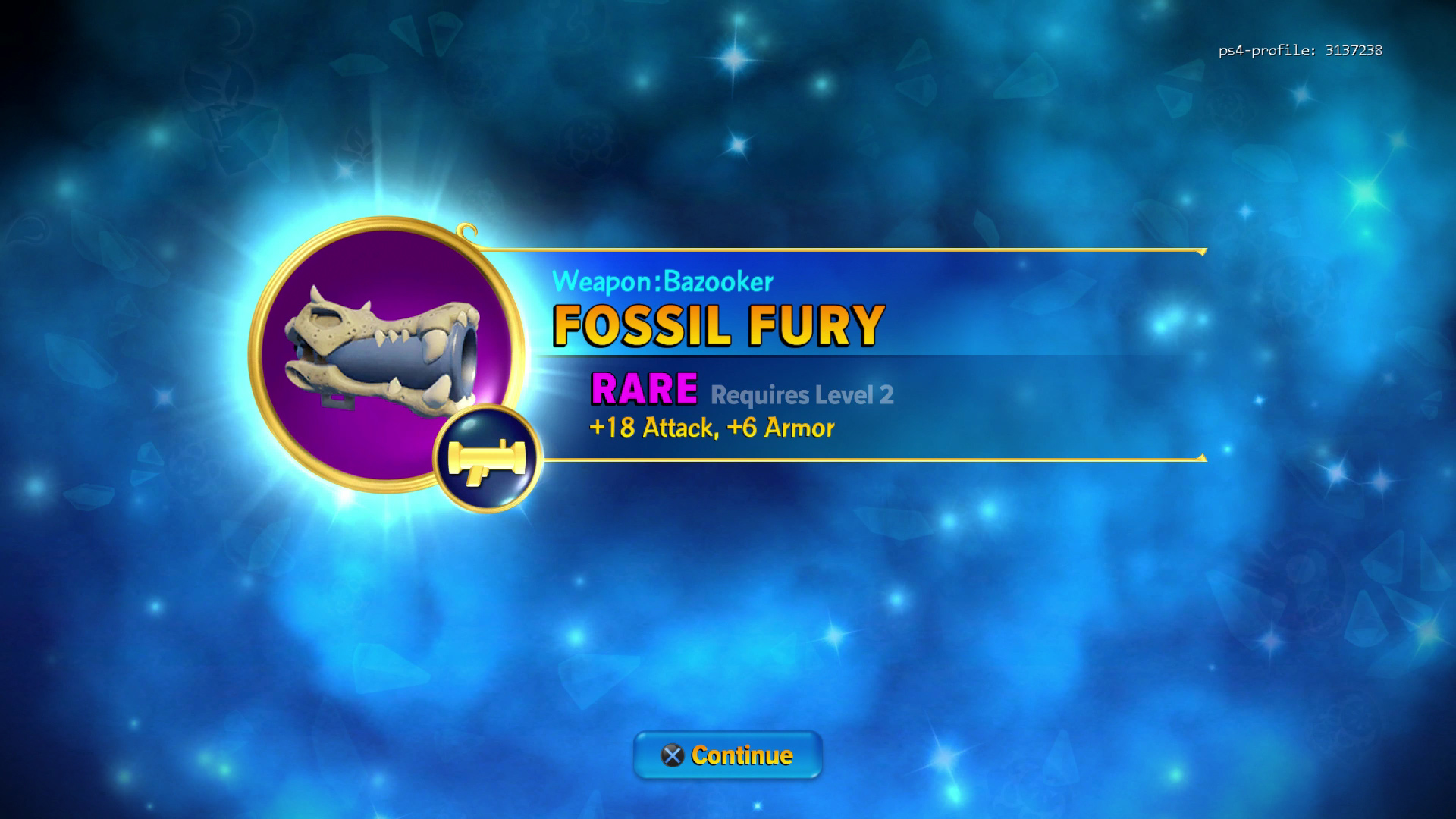 With these items, and others I picked up in the levels and via bonuses delivered when a new Sensei is placed on the portal, the Skylander that I made, my Imaginator, could be radically altered. It's that create, customize, alter, differentiate, and personify nature of the Imaginators that would seem to place 'Skylanders Imaginators' into at world of custom imagination, one refined by seasoned 'Skylanders' experts.

Stay tuned for more on 'Skylanders Imaginators' and feel free to ask questions in comments section. There's plenty more on the game and development that I captured but haven't included here.