Stick to the end.

'Ori and the Blind Forest' emerged from its E3 debut as one of the Xbox One's strongest "little" games. It's no surprise the Gamescom demo manages to capture and enthrall in the same way, with new footage of its own.

The wall-bouncing and horrifying, bottom-of-the-screen rising death bits might borrow from past games, but it's the atmosphere and visual fluidity that make 'Ori' stand out. And that last bit. That last bit was a looker. 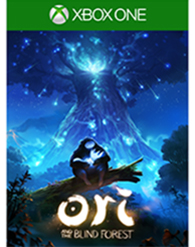