Just a few surprises in the box.

Today is November 10th, and that makes today PS4 Pro Launch Day. After securing a good deal via Target (see details here), I unboxed a PS4 Pro, connected it, updated it, and then was stuck waiting for roughly 800GBs of PS4 data to be restored. (We are talking hours here.) 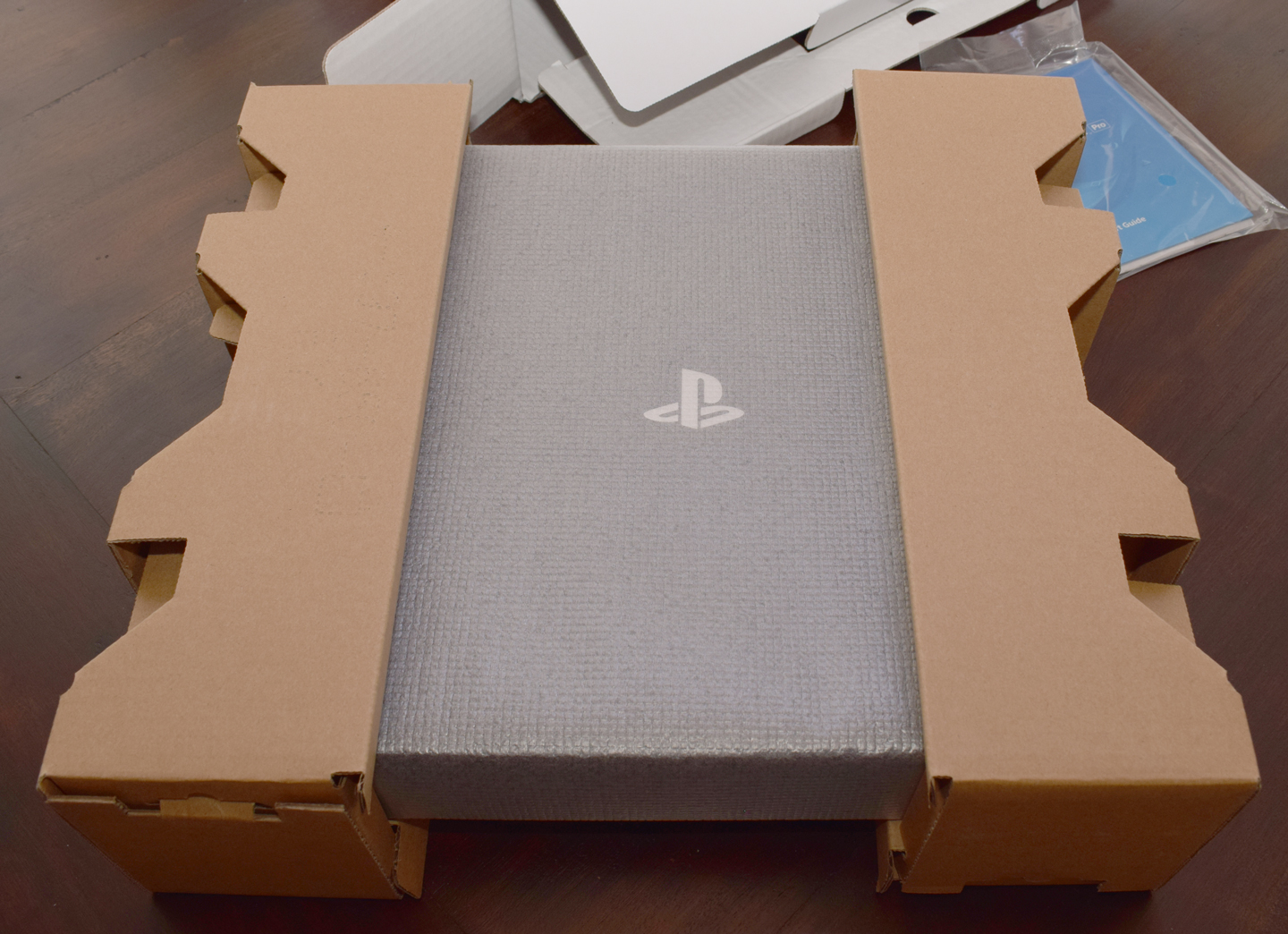 Every single step of the way, from opening the flap on the thin outer box to installing the System Update, was as familiar as using the original PS4.

So, for the unboxing, it all starts with a now familiar thin outer box. This is the box that gets changed once the console begins being featured in official game bundles. 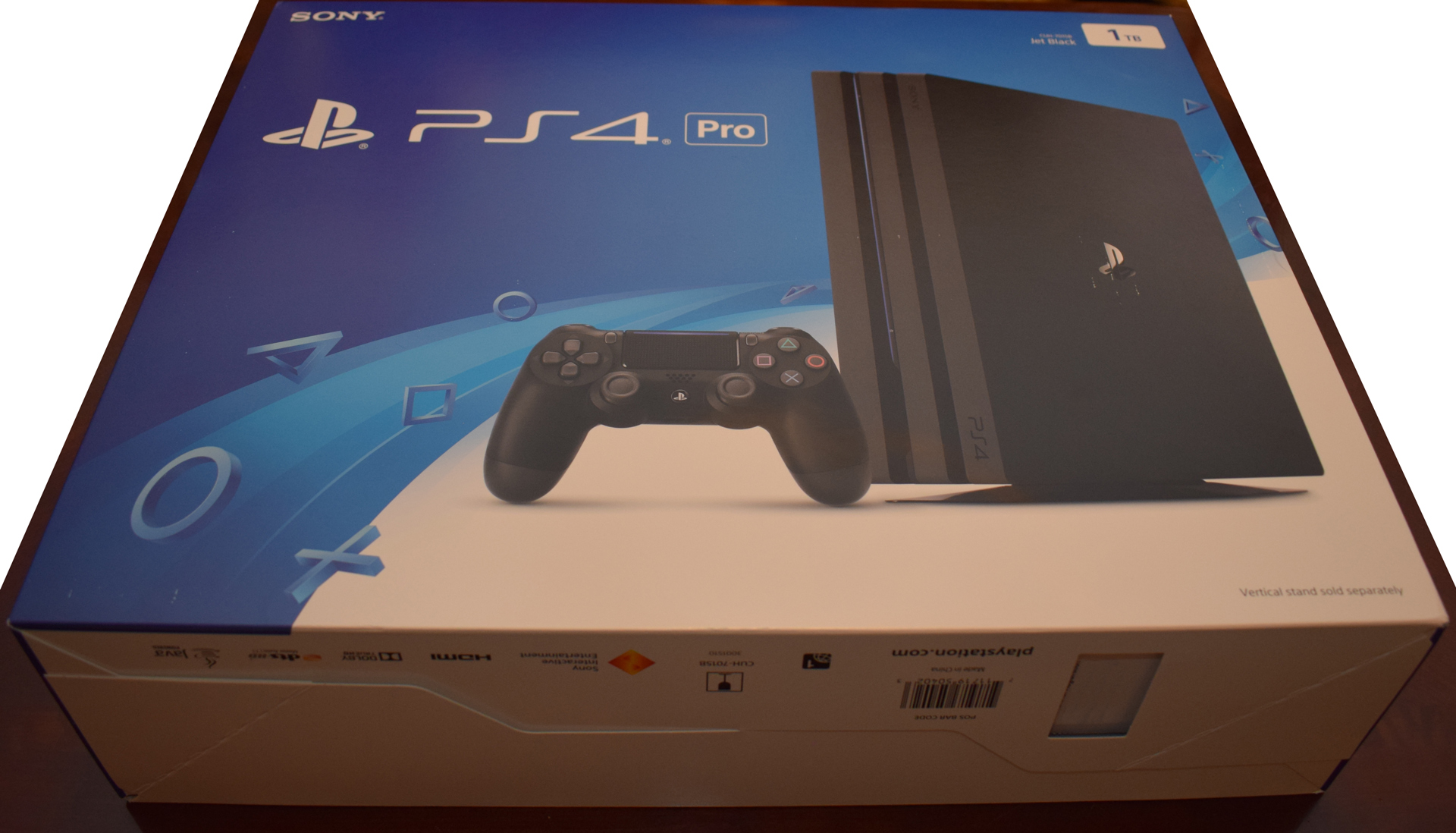 The back of the outer box has a big splash for 'Call of Duty: Infinite Warfare.' Three other games are shown below. They are 'Watch Dogs 2,' 'Horizon: Zero Dawn,' and 'Mass Effect: Andromeda.'

After peeling the circular seal/sticker off of the top flap, the inside revealed a beefy white backed/black logo inner box. 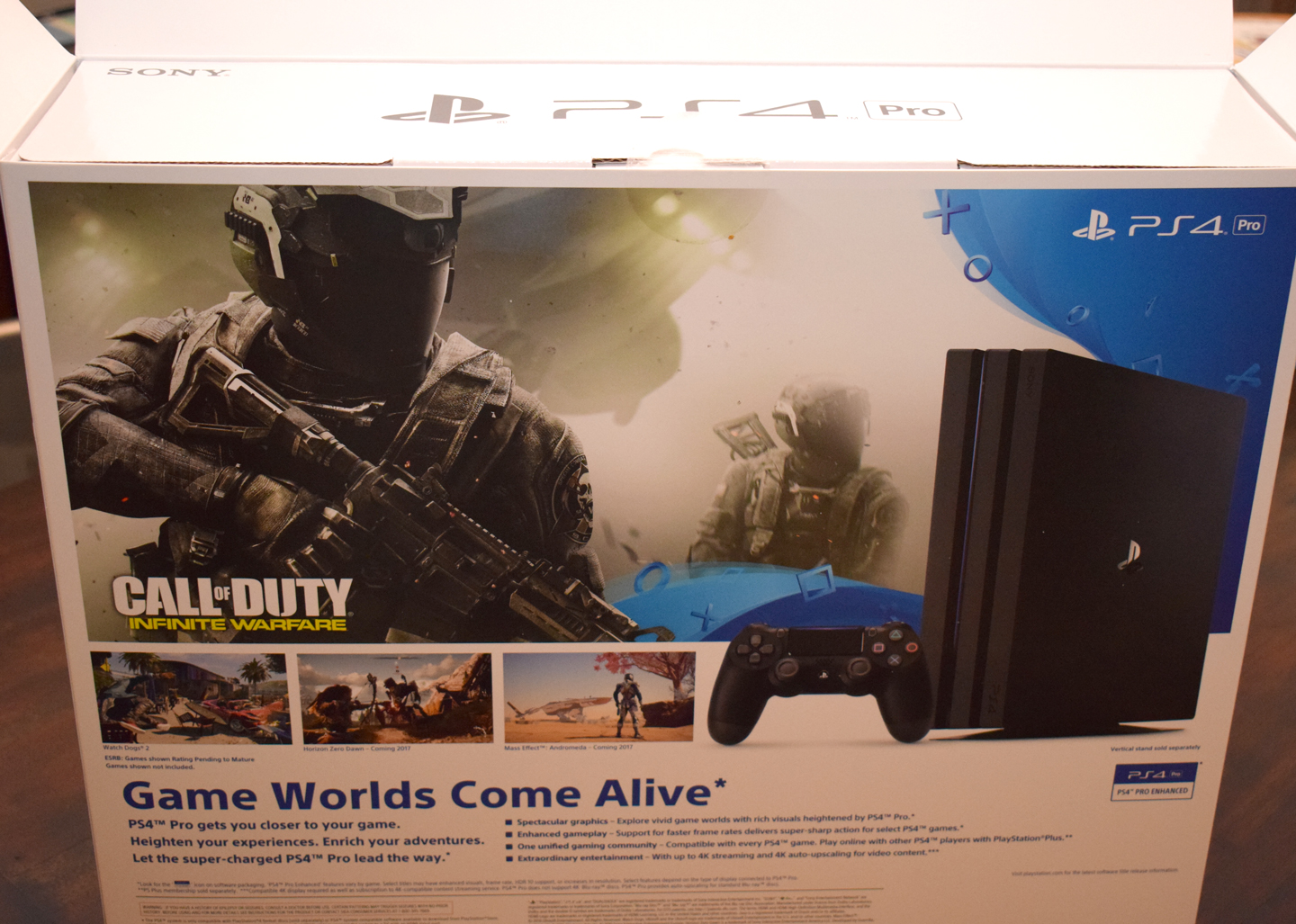 The inside of the white box has a quickstart guide, and is divided into a brown cardboard compartment that contains the controller and all of the cables, and another compartment that has the actual console. (See the pic at the top of this page.)

The controller is the newer DS4 design, which is most notable for having a thin area towards the top of the touchpad that shows the controller light. The power cable is beefier than the one used by the original PS4, PS VR, and Vita. There is also a HDMI cable and a micro USB cable- both of which look just like launch PS4 cables.

There is even a monobud included, which means, much like the original PS4, that the console technically comes with a headset type device.

Finally, after removing the protective cardboard shell and the soft foam wrap, here is the PS4 Pro: 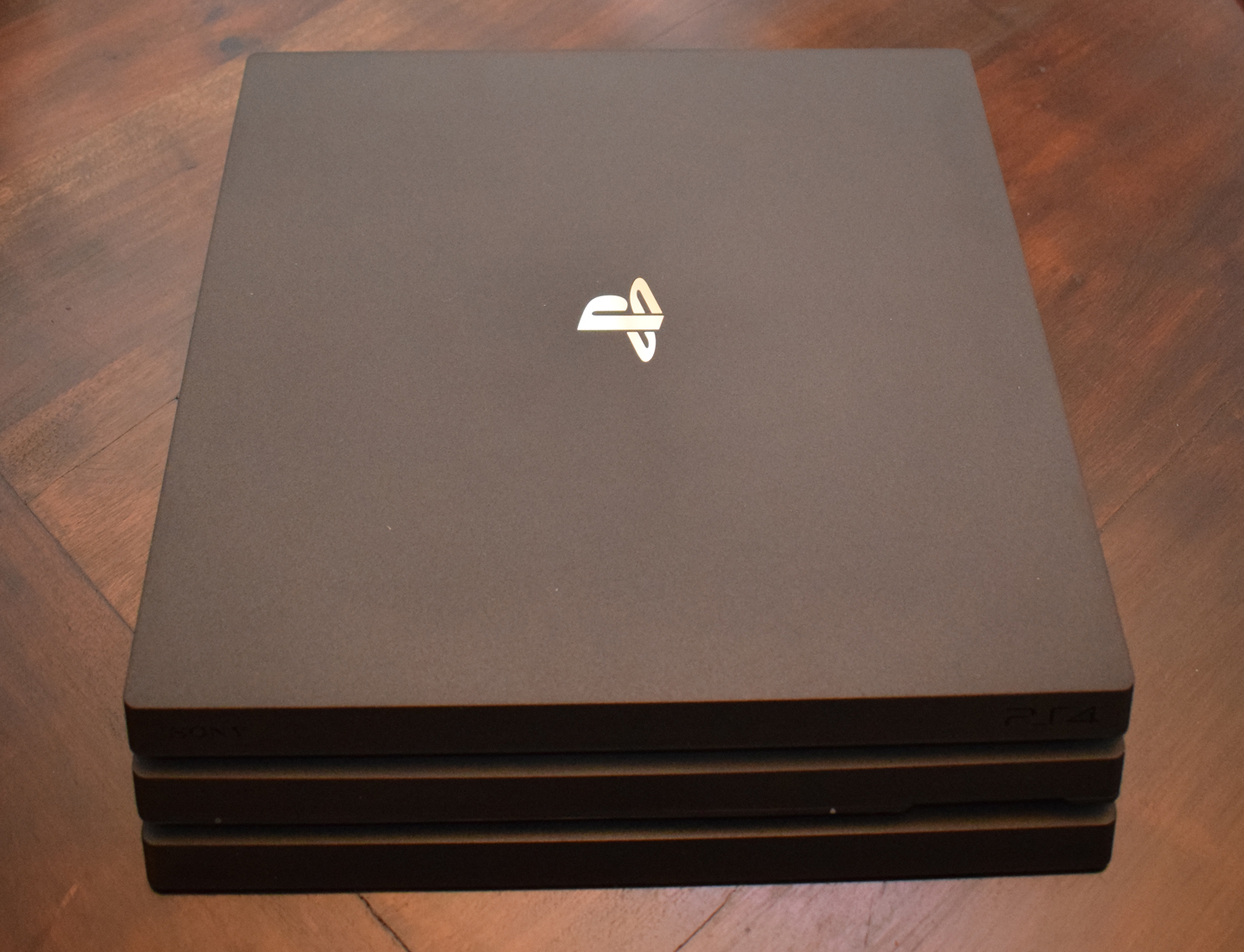 The console can stand (with or without the optional stand) vertically. The back of the console has ports that are all familiar to PS4 users, but happily there is a third USB port. 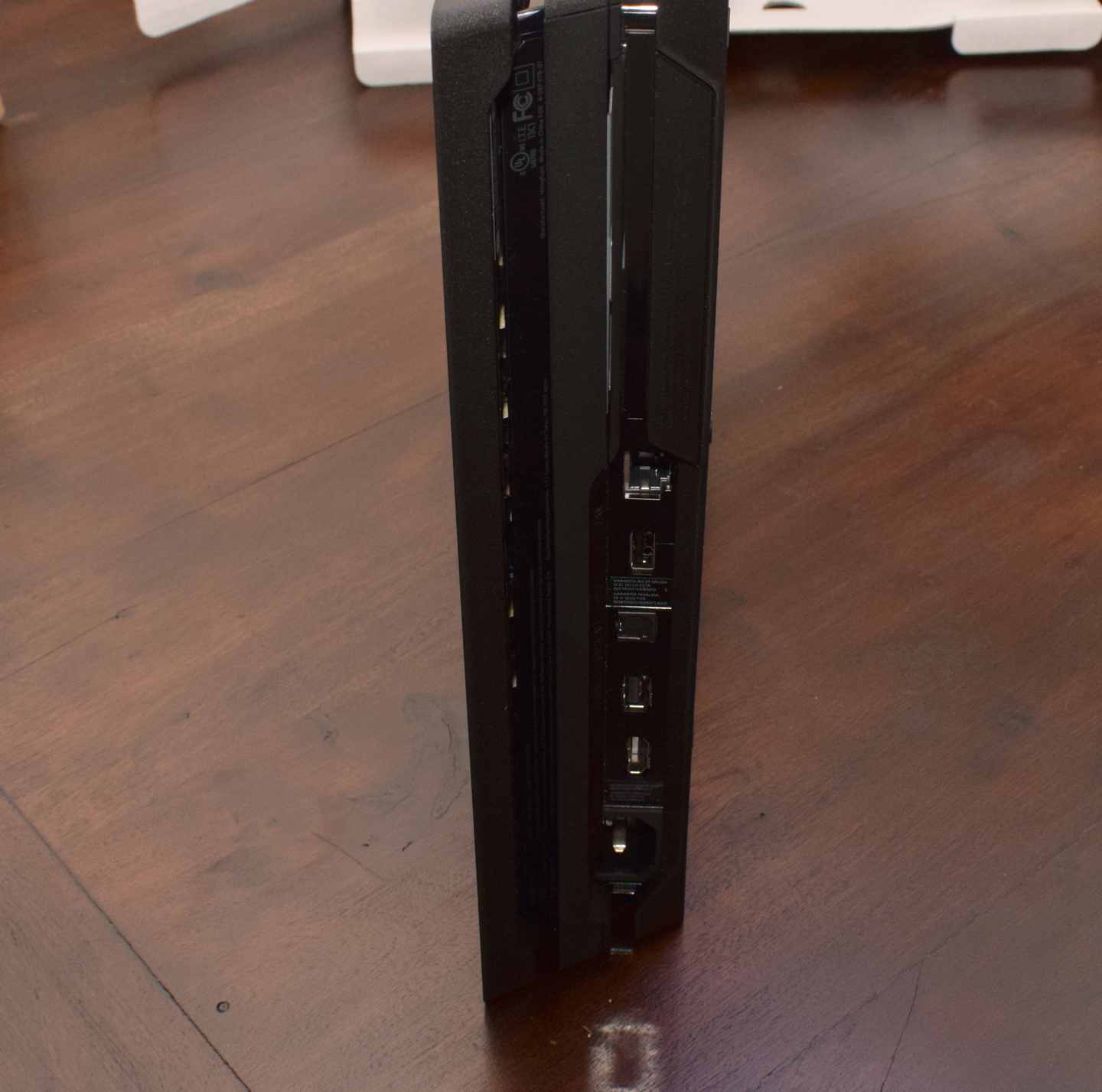 Unlike the original PS4, which made do with three rubber feet, the PS4 Pro has an array of rubber feet on the bottom side all laid out in a PlayStation symbol pattern. This is a bit funny since the recently released PS VR processor until was clearly designed to match the original PS4 and not the PS4 Pro (or even the PS4 slim).

Deep within the system's boxing, there is an offer for a PS Plus trial. As previous experience has taught, this offer is only good for new members.