As if Slippy Toad himself had fallen from the heavens, I am torn from my primary objective time and time again by the shrill cry of friendly NPCs strewn about the battlefield. It's Impa this time, who took her own path over the course of this ever-shifting conundrum of saving the weak and saving the day. In 'The Legend of Zelda,' as in 'Dynasty Warriors,' these are one and the same thing. But this is one of the very few shared qualities between the franchises, their mashup in 'Hyrule Warriors' called upon by Nintendo to fill a certain green-Tunic void.

We've got the review incoming, but there's a certain hump most players are going to have to overcome to enjoy this game, and it's something I've had to do myself. This is our way of preparing you. Above anything else, this is an explainer on what it feels like to actually play the game, rather than a valuation of its combined parts. 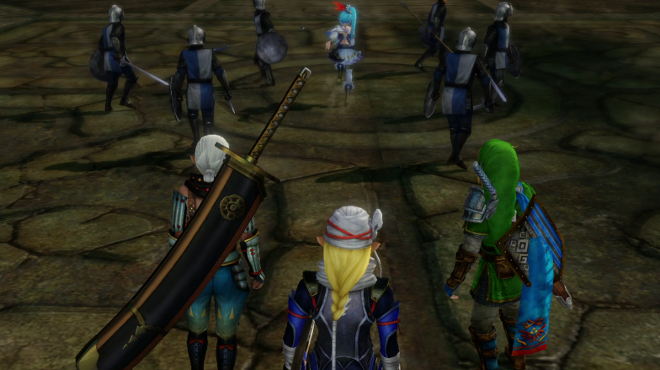 'Hyrule Warriors' is not particularly deep (though it's not remtely short either). It won't strain your thought processes, but it will call on your attention relentlessly. Just one of the prolonged stages frequents both of the inspiring franchises with gusto, but there's one very important thing to understand. At once and always this will be a 'Dynasty Warriors' game with 'The Legend of Zelda' icing.

It's more than visual, to be sure. Small nods to the 'Zelda' gameplay call on more than just nostalgia, from the chests you gleefully dive into to the weapons you receive and must subsequently use on bosses plopped into the game like a piñata. You'll even feel a twinge of muscle-memory when you counter a captain after it attacks, the triumphant sound bites of a successful hit ripped directly from, say, 'The Wind Waker.'

To wrap the glorious lore and visual creativity of 'The Legend of Zelda' around something so emotionally barren as this mashy and violent franchise is to recall your childhood dog as a cat, but then smile anyway in all the memorable quirks of your catdog.

It's a strangely titillating project on paper, in action no less bizarre as you step into the shoes of many legendary 'Zelda' protagonists, most of which have never been playable before, only to dash about a busy battlefield, the regions and armies constantly warring, not so much with each other as simply for your attention.

With Impa and Sheik, as Link, I'm in Faron Woods, a callback to both 'Twilight Princess' and 'Skyward Sword,' and my end goal is simply to push back the enemy and, eventually, take down the final boss. To get there, though, I need to make sure my army doesn't collapse under the offensive of our enemy. 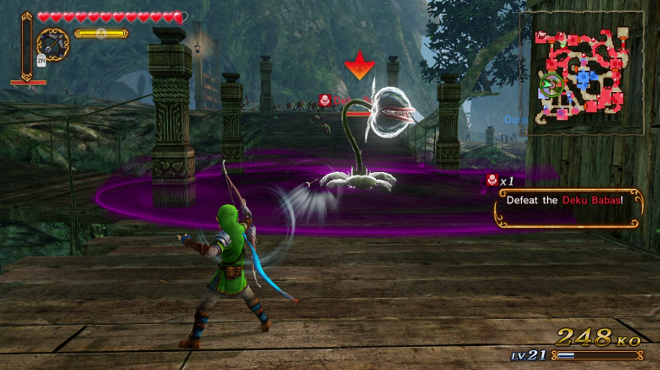 "Deku Babas have entered the field!" It's time to go plant hunting. In 'Zelda' fashion, it's my bow that should do the trick.

"Hyrulian Forces are Retreating to the Deku Tree!" Then followed by: "The Deku Tree is on Fire!" I'll need to find a Great Fairy, always used as the "do random event that can't be simulated by the player" foil, to call upon a convenient rain cloud.

Even when there isn't an objective actively pulsating on that demanding mini-map, you could always capture a nearby Keep and lighten the load of enemy respawns, not that you could really tell all that much in the thousands you're bound to slay over the course of a single 20-30 minute level. You could always take out a nearby enemy captain.

Those familiar with 'Dynasty Warriors' will probably recognize this constant tug to and from the main course of action and all those little things you must to do keep the battle flowing. Failure comes fast to the lazy, while victory is almost always dependent on diligent command of your surroundings and the always busy list of demands. There isn't a quiet moment, ensured so frequently by the woodpecker-to-the-head guitar-riff remixes of 'Zelda' classic tunes. 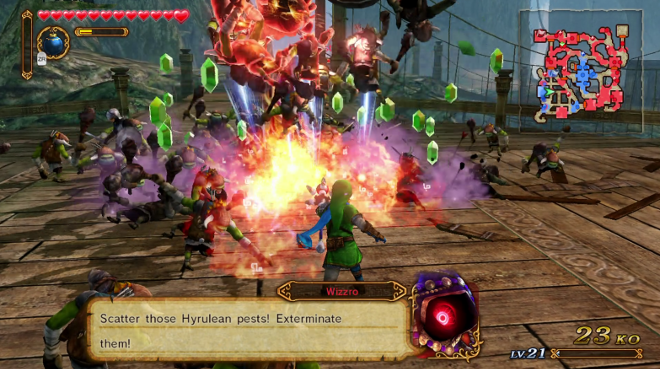 As it is for me, this will be the first time many try out the 'Dynasty Warriors' franchise. In quick, five-second glances, you'd be forgiven for assuming these games are just a button mashing glorification of mass murder. They are. The "combo" melee combat essentially comes down to two decisions – which move hurts individuals the most and which move makes for effective crowd control? The lavish animations spring to life what could otherwise seem a pretty static amassing of foes. They like to stand around, awaiting their mass grave eagerly. All those playable characters feature their own brand of slaughter, some leaning more in the direction of crowd control, some slightly specializing in individualized attacks. That's where most of the variety comes from, and it's a stretch. The X and Y buttons on your Gamepad will doubtlessly loosen.

But, importantly, that button-mashing is all a coating under the Hyrulian coating too, since it's really a battlefield management simulator. It all comes down to this: 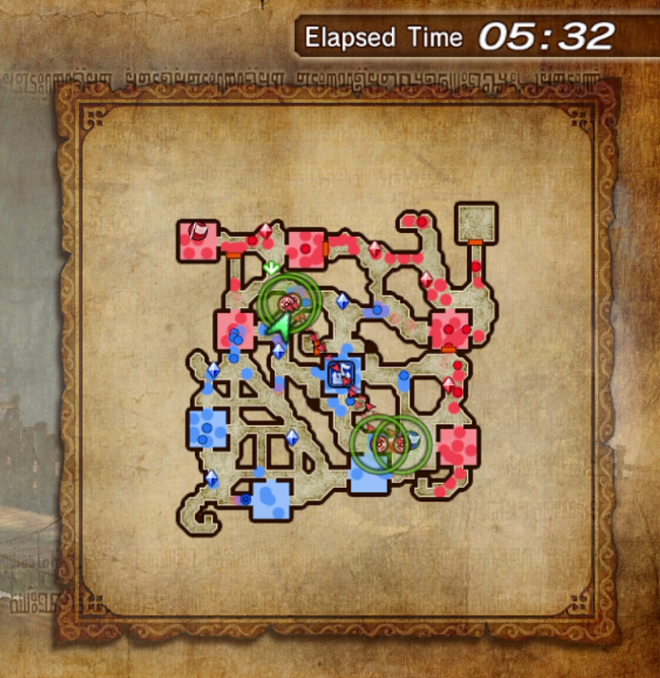 Instead of a mouse cursor, though, you're a sword or Fire Rod-wielding murderous psychopath, but a good psychopath. If there's anything that rubs me the wrong way, it's how 'Hyrule Warriors' gleefully forgets that every 'Zelda' game is about preventing a war, not engaging in it. Oh well.

So I'm reminded of another Nintendo-exclusive franchise. 'Dillon's Rolling Western' of the 3DS, a tower-defense bout with an on-the-ground experience, strikes a familiar emotional chord. There's always this anxiety that you won't get there fast enough, that you're missing something, because plenty of times it's true. You're too slow. You've failed the Hyrulian army. That faceless Hyrulian Captain, culled as more important things crossed my plate, retreats in his loss. I am a disappointment. He'll tell stories of how Link failed to come to his aid, but killed all those litltle dudes oh so well. 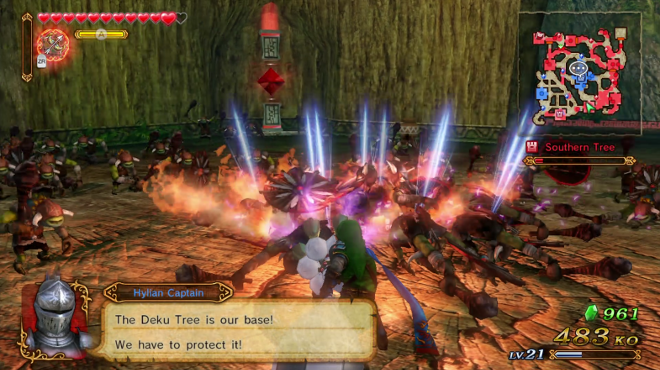 Amidst the current trend of hand-holding incentivizing and "You're the best at everything!" encouragement wrought in AAA development, it's nice to be actively pressured. I like the feeling, if not the lack of nuance, of looming failure. I like the reward, too, of another smoothly designed cutscene featuring the oh-so-memorable 'Zelda' cast, all side-by-side and heroic as they tend to be. Strange to watch them cut down armies with smiles on their faces, but rewarding to finally get that victory after so much sweat.

That's the feeling of victory in 'Hyrule Warriors.' That's a review of just one battle among many in the game, the gameplay not yet reaching a potential for staleness or monotony. Hopefully it can last the war. Our review of the entire thing, features, modes and otherwise, is fast to come. Whether 'Hyrule Warriors' is worthy of its coat of paint is another question entirely.