It's August 2nd, and as promised at E3 2016, Microsoft has released the very first game console to support Ultra HD Blu-ray playback, the 2TB Xbox One S. Along with the addition of that major feature, as compared with the original Xbox One (or any announced game console), comes several related firsts such as HDR10 support and 4K streaming video. (Check out the full review here.)

I've written before about several important details for the Xbox One S Ultra HD Blu-ray playback, including that the system would use an updated version of the familiar Blu-ray player app, that there would only be one HDMI out, that there would be HDR10 support (and not Dolby Vision), and that, like the original Xbox One, there is no support for direct bitstreaming of audio, which means no Dolby Atmos or DTS:X. On this last point, Microsoft is "exploring" such support, but there's no change in stance beyond that. 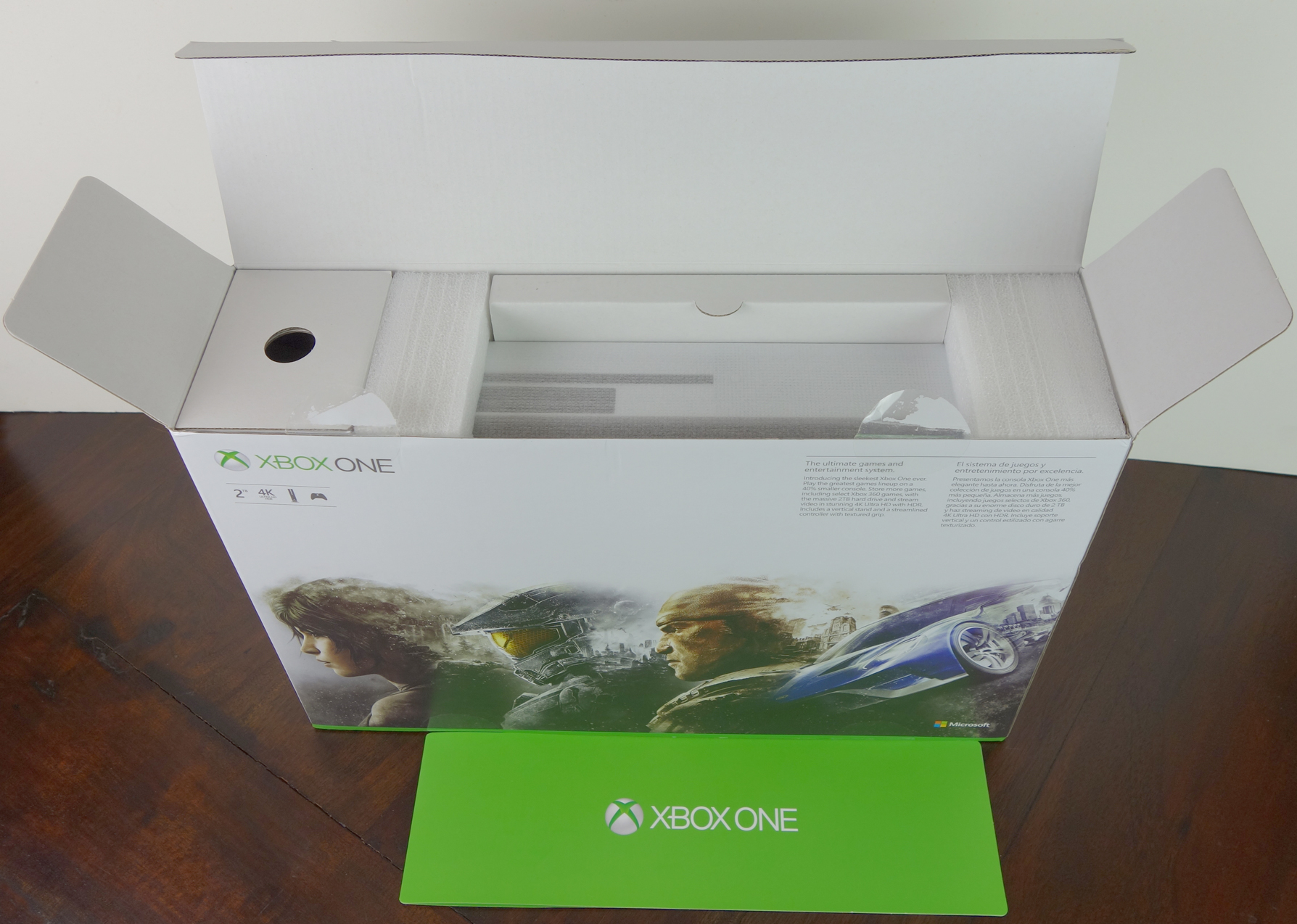 I once had an AVR with HDMI 2.0 but without HDCP 2.2, but it is long gone. Ditto for two AVRs I had that each only had one HDCP 2.2 HDMI port. Now, the combination of the Xbox One S, Denon S910W, and LG 65UH7700 has made for one happy HDCP 2.2 chain. There was just one very important exception to harmonious state, the setup of the Xbox One S.

Right out of the box I hooked the Xbox One S to the S910W, which was hooked to the LG 65UH7700 (as well as a Samsung UBD-K8500 Ultra HD Blu-ray player) with the LG's HDMI Ultra HD Deep Color setting engaged. That didn't really work out. Instead, I hooked the Xbox One S directly to the TV and allowed the system to update. It went through two updates (a 3.4GB followed by a 1GB update), during which the onscreen images of the Xbox One hardware changed from the old, black Xbox One to the new white Xbox One S. The controller images also changed. Having gotten the system up to date, I was then able to use it with the AVR, TV, and the HDMI Ultra HD Deep Color setting without issue.

The conclusion I draw from this little setup drama is that, for the time being, it's best to get these launch systems updated before trying to use 4K specific features or any features that might call for HDCP 2.2. Post updates, and the system was smart enough to report that I should set it to 4K output, with the 10-bit setting (for 60Hz and 24Hz, but not for 50Hz), and to allow HDR and 24Hz. This is with the TV's HDMI Ultra HD Deep Color setting engaged. Without it, the Xbox One S would only suggest 4K output. 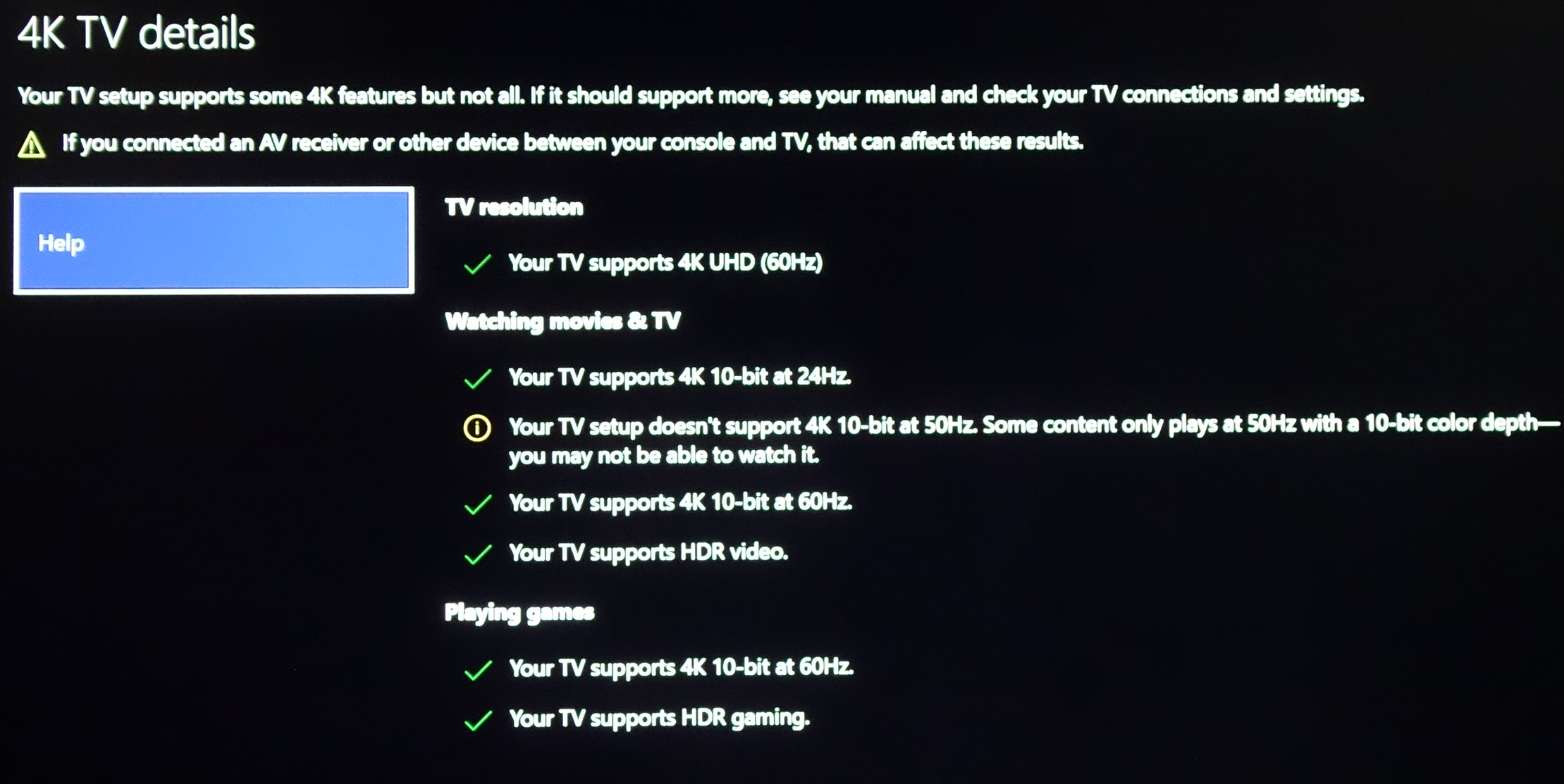 Channeling the launch era of the original Xbox One, the Xbox One S did not come with the Blu-ray app installed. After a quick download from the store, and the Xbox One S was happy to play the 'Star Trek' Ultra HD Blu-ray. The visual interface, icon, and controls are unchanged from the Blu-ray app found on my Day One Xbox One. This includes the information toggle which shows bitrates. 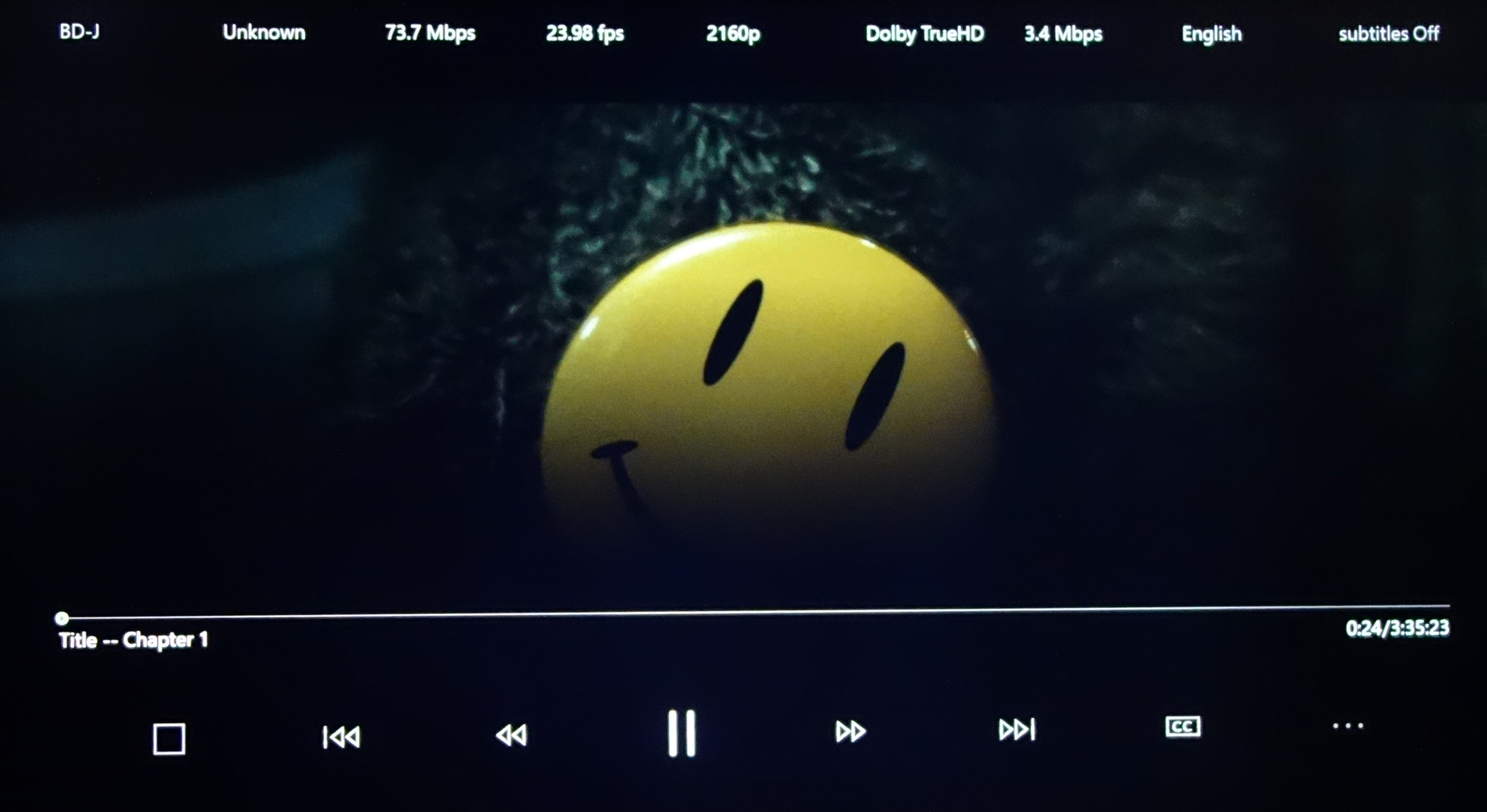 Over the course of a few days, I ran through 'The Martian Extended Edition,' 'Watchmen: The Ultimate Cut,' 'Sicario, 'The Revenant, Creed, 'Batman v Superman: Dawn of Justice Ultimate Edition', and 'Chappie' Ultra HD Blu-rays, and being frank, I was impressed by the Xbox One S. It appears to be a lot better at playing Ultra HD Blu-rays than the Xbox One was at playing Blu-rays. Not once did the Blu-ray app crash to the dashboard. Admittedly, I have rarely used the Xbox One to play Blu-rays, but on those rare occasions, it never impressed me.

Compared with the Samsung UBD-8500, the Xbox One S does not support Atmos (or DTS:X) which, with the discs and hardware mentioned here, is a sad omission. As I was jumping around to different scenes on different discs, I noticed that the Xbox One S had a tendency to sometimes hiccup right at the beginning of a selected scene. This never happened during normal play and was not something that I could easily reproduce. 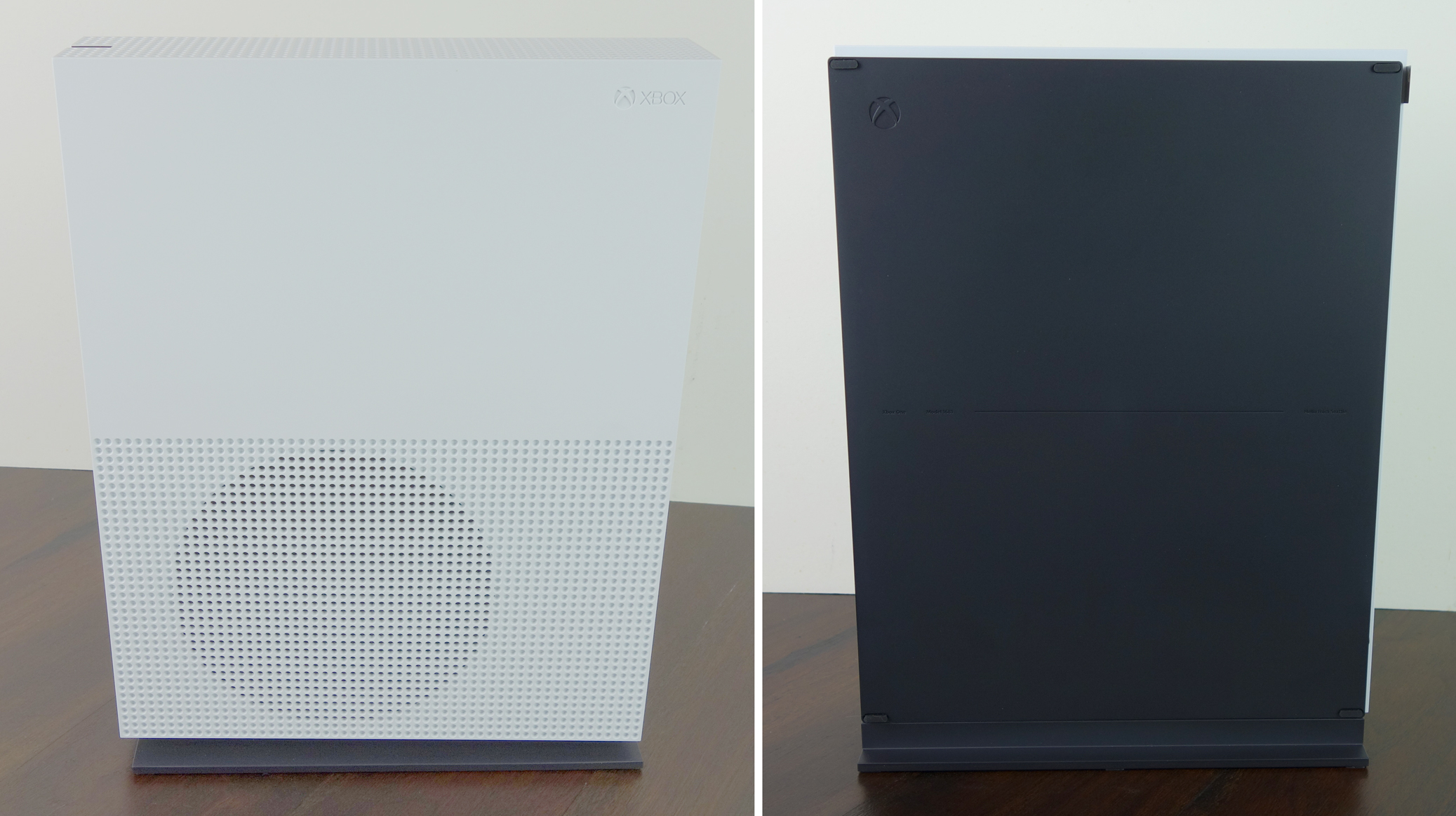 Using the Xbox One Media Remote (which is from 2014 and uses IR), I found that navigating Ultra HD Blu-rays was easier than on the Samsung UBD-8500 thanks to dedicated fast forward and rewind buttons. Of course, this remote is not included with the Xbox One S and must be bought separately.

Using the Xbox One though several day-long testing sessions (but in an air-conditioned environment), it never seemed to get hot, or really, to become audible in a hardware sense.

I've enjoyed owning a Samsung UBD-8500 and being able to wire it directly to the TV and directly to any HDMI 1.4 AVR. But with all HDCP 2.2 equipment in place, the Xbox One S is a welcome option. If Microsoft would add Atmos support to the Xbox One S, it might easily usurp the UBD-8500's place as my go-to Ultra HD Blu-ray player. Streaming video support is another matter altogether.

For 4K HDR streaming, I usually use either the UBD-8500 or the LG's internal apps. The recent switch to Dolby Vision for Amazon on the LG makes the app fun to try against using the HDR10 version on the Samsung.

On the Xbox One S side, the streaming apps aren't really up to snuff. During testing, the Netflix app could play 4K content but the entire app tended to engage HDR mode on the TV, much to the determinate of whatever content I picked out in Netflix. I suspect that this is a bug that will be sorted out soon and that the Netflix app will be as adroit as its LG and Samsung counterparts. As for Amazon and Vudu, on My Xbox One loaner unit, neither has yet been updated for 4K support. My understanding is that the Amazon update will roll out soon with other unspecified partners to follow.