A Looker With Just Enough MOBA to It: Gigantic Beta Xbox One Impressions

We've been waiting for a larger crack at 'Gigantic.'

This preview was conducted on the Xbox One.

'Gigantic's developer Motiga has been going through some problems lately as they hemorrhage staff. There was a round of layoffs in December, followed by many more just last week. In their press release they assured us that it was temporary, but I have a sinking feeling that the game will either never see the light of day in full release, or will be its creators' swan song. But enough cynical speculation, let’s talk about the game itself and how it plays.

'Gigantic' is described as a third-person shooter MOBA, but it probably has more in common with the former than the latter. It does have several things we’ve come to expect from the MOBA genre: a 5v5 format, giant objects that serve as goals (guardians), and distinct character classes with upgradeable skills. It doesn’t have auto-attacks, lanes, creeps, or a jungle, although it kind of has towers. These are creatures that can be summoned at key points around the map and provide bonuses for their team, as well as supplying power to the guardian. The guardians are huge animals that sit on opposite ends of the map and must be destroyed for a team to win. Several times during the match, one or both guardians will move from their spawn point towards the center of the map. During these times they are vulnerable to damage, should the opposing team coordinate their efforts and wound it. Then they return to their spawn. Once a guardian has been wounded three times, it dies and its team loses. 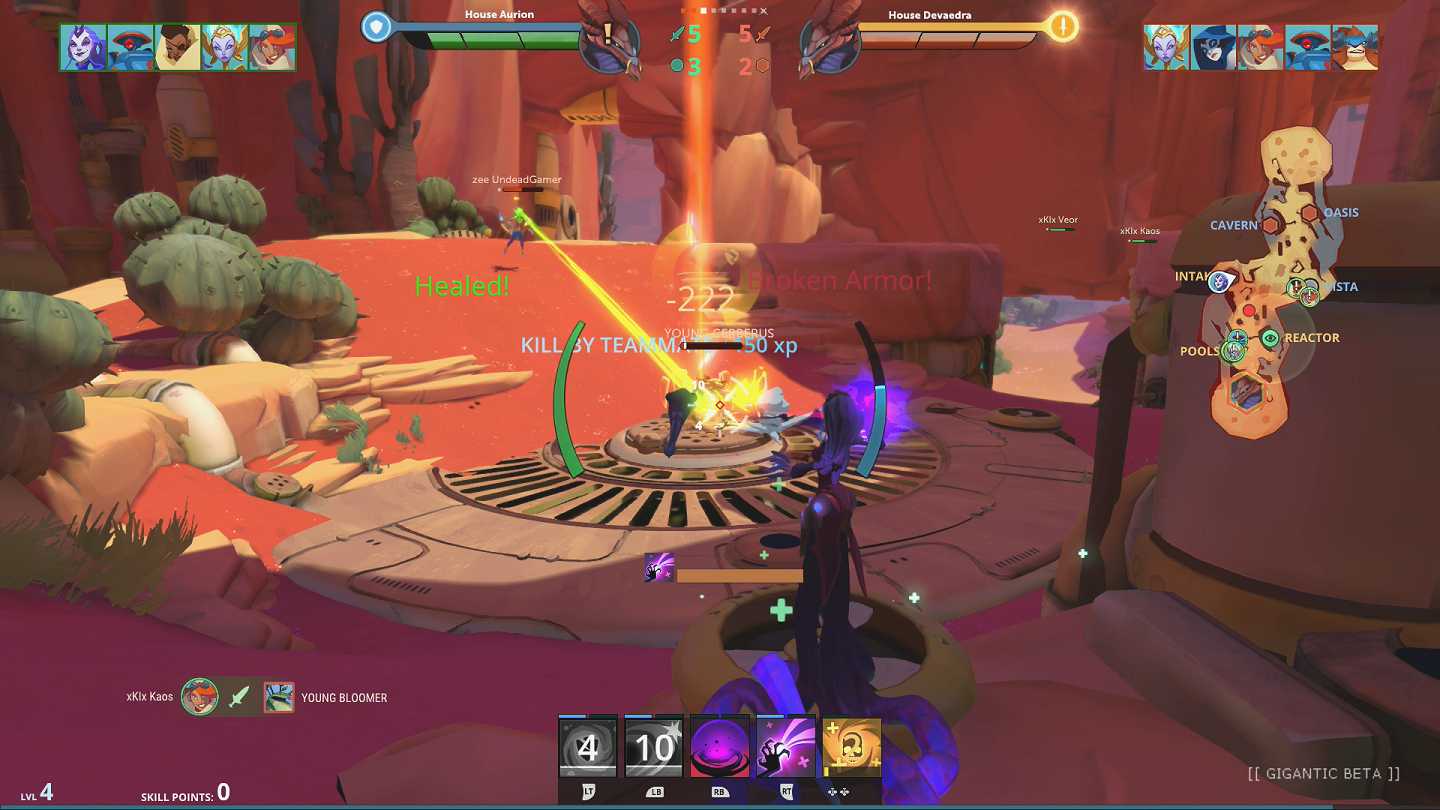 'Gigantic' is still an action shooter, however, which translates to lots of speed and mobility among the combatants. They can jump, dodge, and sprint, and because the maps have an element of verticality, skill shots can be challenging to pull off. Healing is quicker than in a typical MOBA, possibly because once the characters leave the safe zone, they cannot return to it until they die. Stamina is used both for mobility and skills, but regenerates very quickly. Every match is complete chaos and much more fast-paced than top-down PC MOBAs like 'League of Legends' or even the Xbox’s own 'SMITE', which uses a similar perspective but has more conventional MOBA movement.

The heroes share experience among the team, and killing or summoning creatures adds to this pool. Focus points, used to fuel a hero’s superpower, can also be spent on upgrading creatures, making them difficult for solo enemies to take down. The creature summoning areas are often hotspots of hero activity as they vie for control of them. Once a team has been pushed back to their guardian, losing all of their creatures along the way, they are in serious trouble.

The heroes themselves are a blast to play. Some of them are pure shooters, like robotic HK-206 with his turrets, grenades, and mortars, or Beckett with her twin SMGs and cannon. Four main skills are available to each hero, with the right trigger typically being reserved for a standard attack that uses little stamina and has no cooldown. The other abilities have synergy if they are applied in the right order - Vadasi, for instance, is a high-risk healer who can sacrifice her own health to create floating orbs of power. The next time she activates a different skill, the orbs enhance or modify its effects, but do not restore health. Tripp is a lightning-fast melee assassin who deals more damage after she turns invisible, and so on. 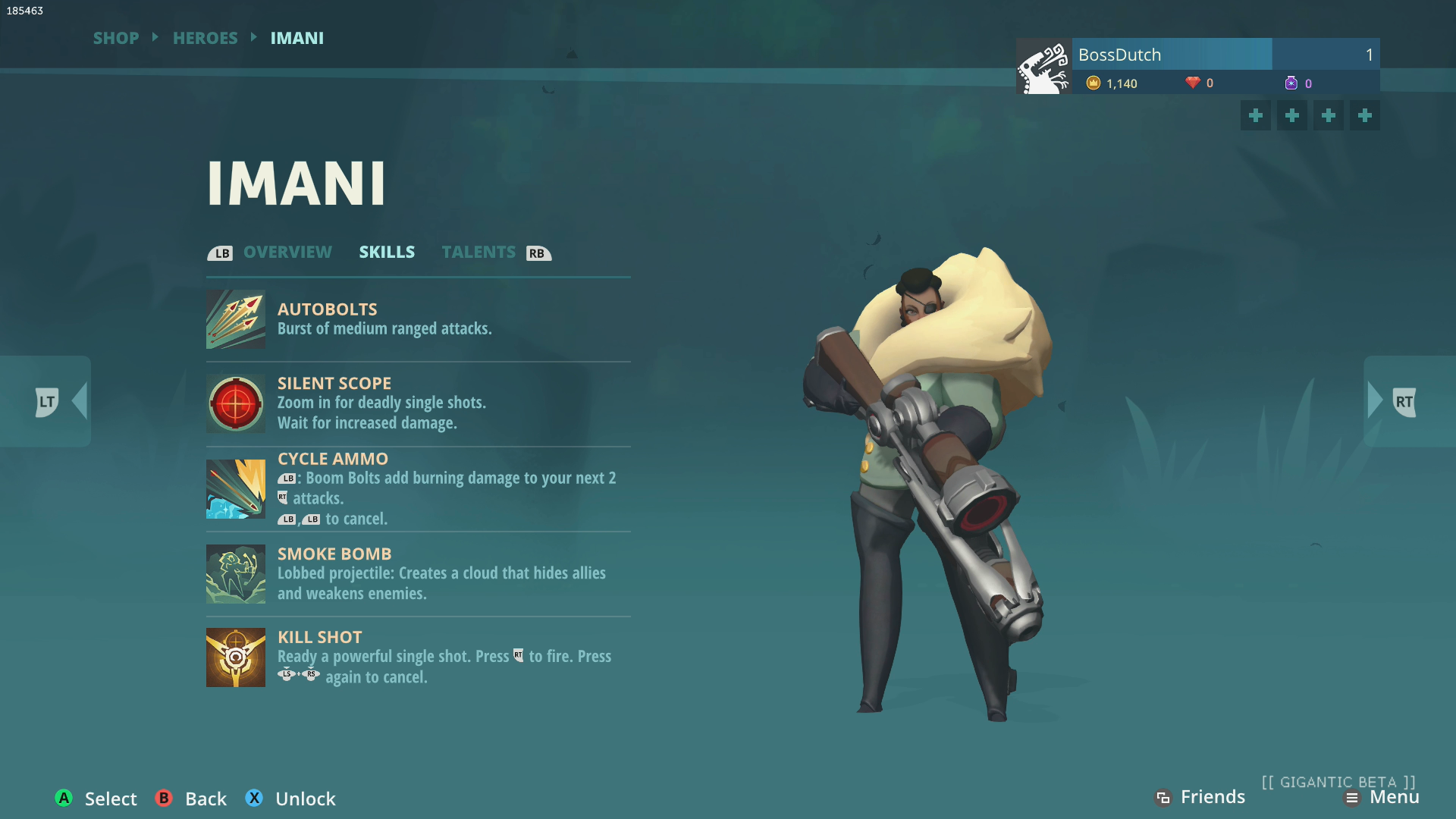 'Gigantic' doesn’t have a particularly complicated ruleset, but its tutorial does have some difficulty explaining it to new players. Ultimately it doesn’t matter, as the heroes simply need to fight the other team to win, and converge on the guardians whenever they move or clash (events which are clearly announced by the narrator). Matches are short, typically in the 15-minute range, which I think is the sweet spot for a game of this nature. Respawn timers are also short, always less than a minute. Matchmaking at the moment is dreadfully long - I think I waited an average of around 5 minutes per match, with the timer ticking upwards of seven minutes with some frequency. The queue is open, so I was not able to select a hero until a match had been made. This permits quicker matchmaking but also means that I could end up with a hero whose abilities are a mystery to me. 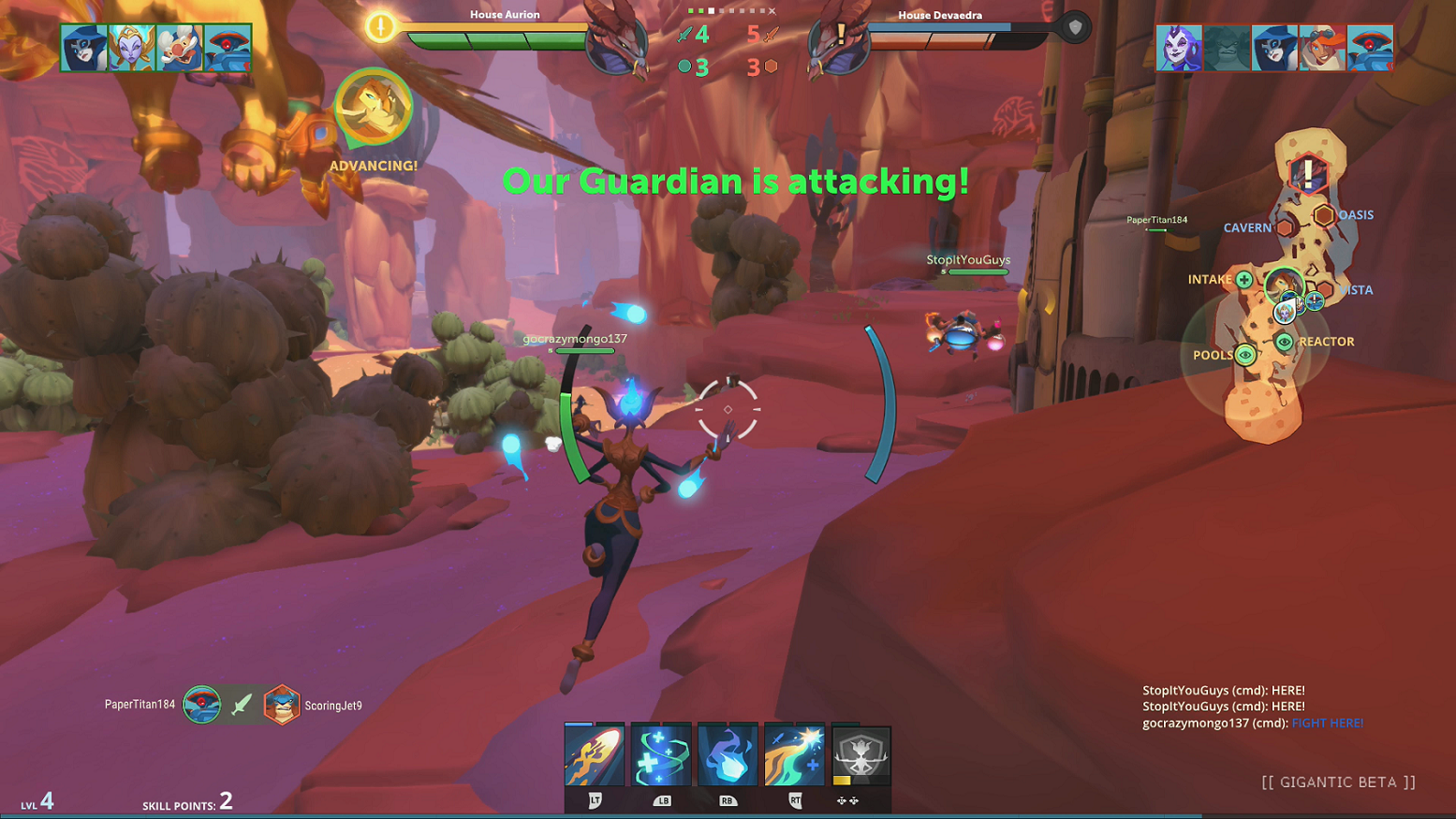 The art design is wonderful. It has a flowing, exaggerated animated look and cutesy creatures. The environments are vibrantly colorful, a far cry from the beige and brown found in many multiplayer shooters. Only a few maps are on offer in the beta, but they are of an almost perfect size and shape. My only complaint about the level design is that sniper characters often seem to be an advantage over close-range or melee attackers, because sight lines are so long over the entirety of maps. Perhaps the creature summoning areas could be a bit smaller to force close- to mid-range fights, or sniper damage could be nerfed. 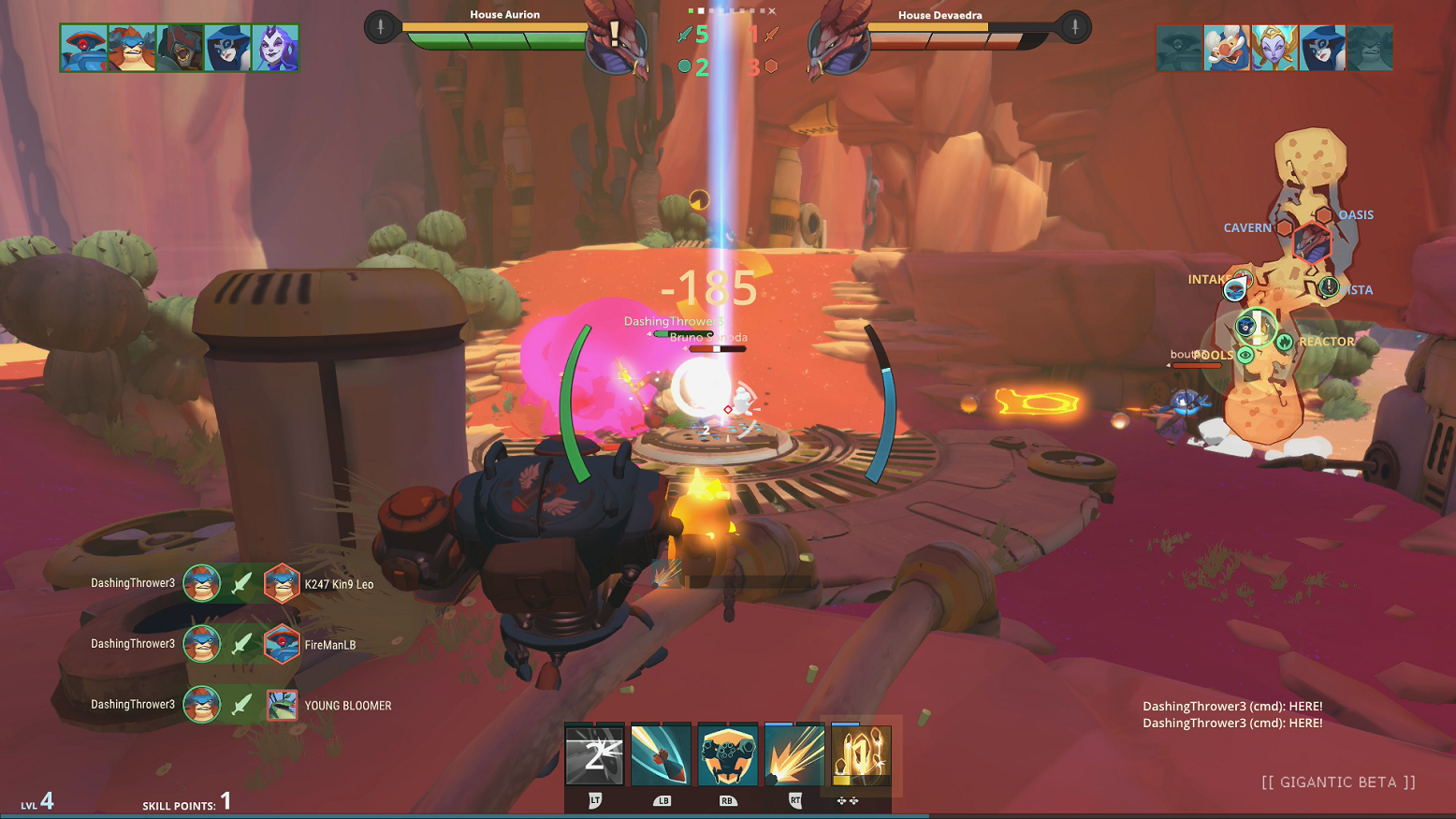 In short, Motiga has a very fun game in the works, and keep in mind that much of the content hasn’t been published yet. Currently, there's only one game type and a few maps. Some creatures are missing from the store, and who knows how many heroes have yet to be revealed. If the developer can overcome their current woes, 'Gigantic' could have a bright future.