Your Chariot Awaits: 'SMITE' Impressions on the Xbox One

More than meets the eye.

The genre of multiplayer online battle arenas (MOBAs) is quite thin on consoles, but on the Xbox One, 'SMITE' has been positioned as an early candidate to fill that role. 'SMITE' has been available in full release on PC for over a year, and is currently in open beta on the One.

'SMITE', for the most part, sticks closely to established MOBA orthodoxy as demonstrated in 'DotA', League of Legends', and the more recent 'Heroes of the Storm'. Two teams are separated by lanes on a map, and to win, a team must proceed down the lane and slowly whittle down the defending towers and heroes until they get to the bright juicy core. 'SMITE' is all about gods, so the cores are represented by mobile titans who can defend themselves when attacked. A team is made up of usually 3 or 5 heroes (each a god), either human- or AI-controlled, and NPC henchmen who travel down each lane of their own volition and serve as cannon fodder and portable shielding. On the maps in which there is more than one lane (one gametype, Arena, has no conventional lanes at all - more on that later), a "jungle" fills the space between them. It is filled with little nooks and crannies in which neutral monsters dutifully wait to impart heroes with temporary stat boosts upon defeat. 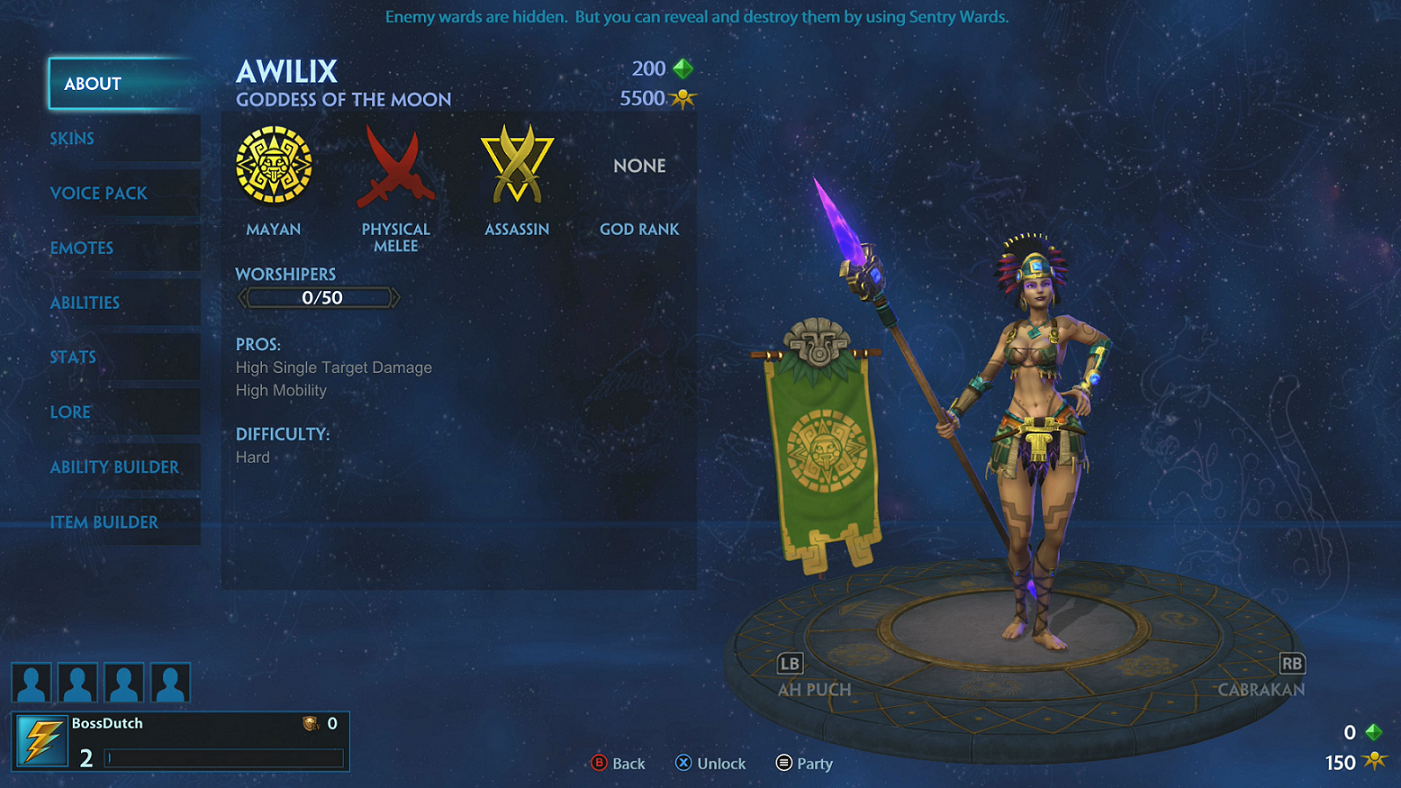 The Face of the Gods

Every god has distinct skills. Some are sustained damage dealers, others have high burst damage that allow for sudden ganks, some are tanky, others have crowd control, and so on. The gods have four skills apiece, one of which is a powerful heroic with a higher cooldown. As a god earns experience in each match, they can buy more levels in each skill (god levels do not carry over from match to match, but the player has their own level for unlocking other content). Buying skills is straightforward, as they are static, however, the store system provides for deep customization. Each god has five slots for passive boosts and another four for active and consumable items, and many of those items can be upgraded for extra gold as the battle progresses. This allowed me to fill in gaps in my hero’s stats - the Mayan death god Ah Puch, for instance, is quite fragile so I bought him a set of defensive items. The items can also be used to fill in a team's gaps, like when your team brings too much tank and not enough gank.

'SMITE' differs from other MOBAs in that it has a third-person, over-the-shoulder perspective, like an action game or typical fantasy MMO. At first I was concerned that this would lead to tunnel vision, but the minimap is quite large and detailed, so sneaking up on heroes isn’t a given. When running forward the gods move at full speed, but when moving laterally or backwards they slow down. Speaking of MMO, the on-screen action is very reminiscent of that genre. Attacks are automatic and always hit, barring any kind of defensive power by the attacked. 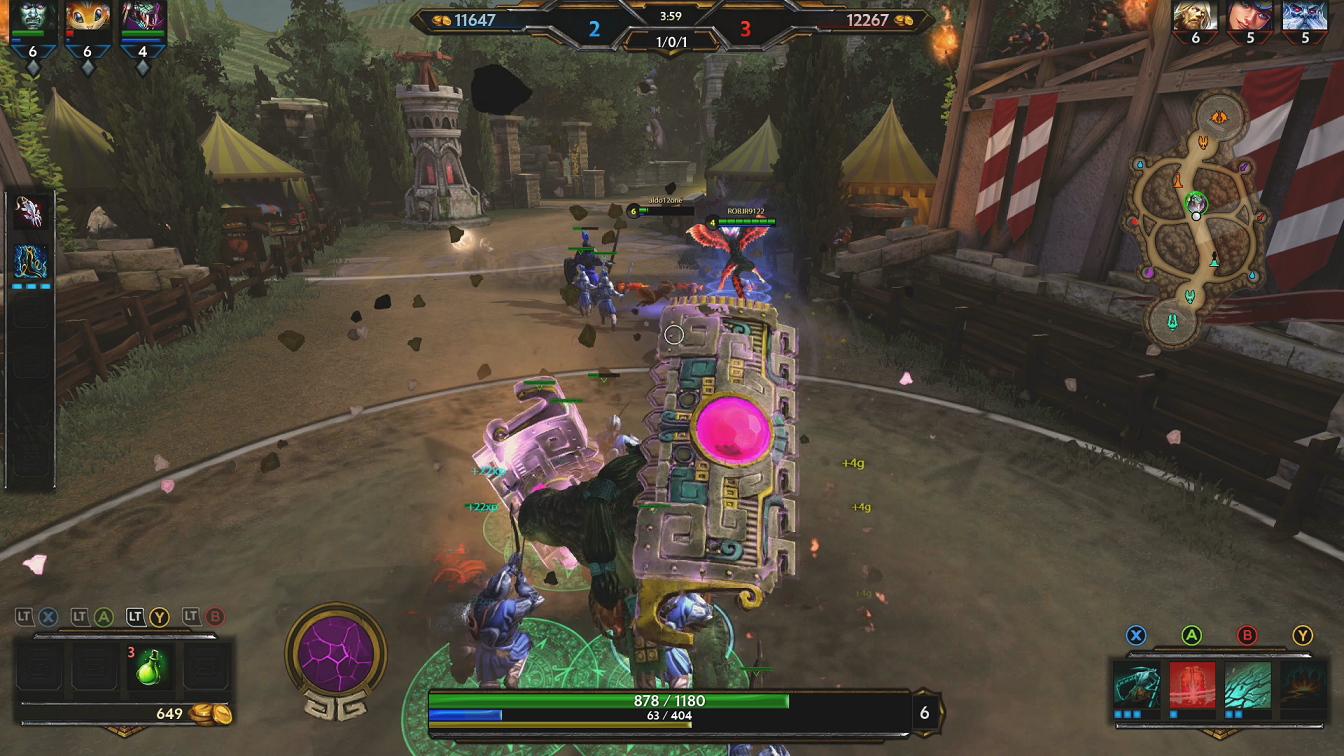 This perspective is great for a console environment, where many gamers are already accustomed to the third person view. Other MOBA elements have translated to the Xbox well, such as communication. Honestly, the lack of a keyboard, combined with the tradition of most Xbox users not plugging in a headset, makes for a very refreshing and flame-free experience, which is a persistent issue in PC MOBAs. Observant players can still figure out where they’re needed most by watching the minimap, and players who are familiar with the pantheons will understand which of their teammates are going to need support and which ones can effectively solo. Before a match, players can declare their strategy with a button press (solo, jungle, carry, etc.) and during a match, we are able to request assistance in specific areas, although this requires complicated button combos because it’s so detailed. The game deals with AFK players pretty well - in co-op matches against the AI, the AI team will only send as many heroes out of its base as the player team has on the field. If two humans are AFK, two AI gods will go AFK. Playing a game without going AFK rewards the player with increased favor bonuses. 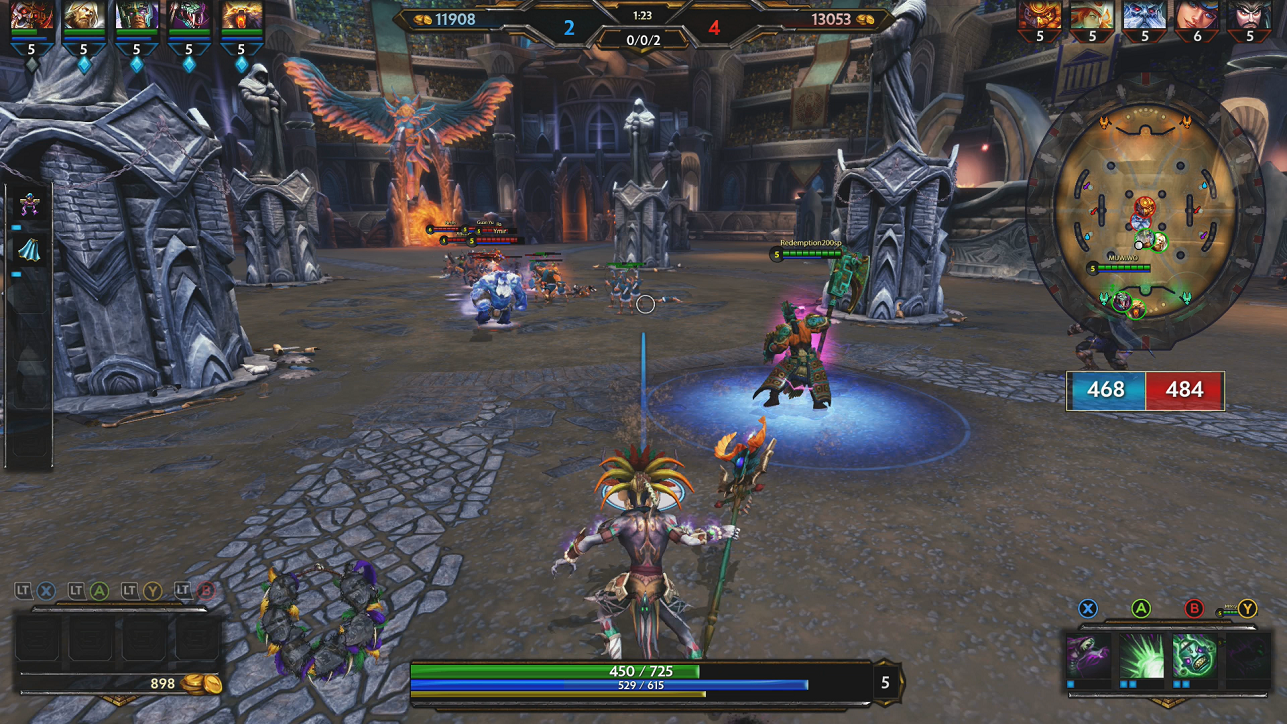 'SMITE' is a freemium game, but is quite generous compared to its peers. A single payment of $30 nets you every hero ever (currently there are 67, and the pack includes all future heroes) and a few other doodads. Gods can be purchased with favor, which can be earned by completing the tutorial and practice matches, and of course matchmade games. Buying a god with money refunds any favor you have spent on that god. Gems, found in every freemium game ever, can be purchased with USD and are used to buy individual gods and skins and such. There are also player ranks and god ranks and worshippers and all kinds of other content. 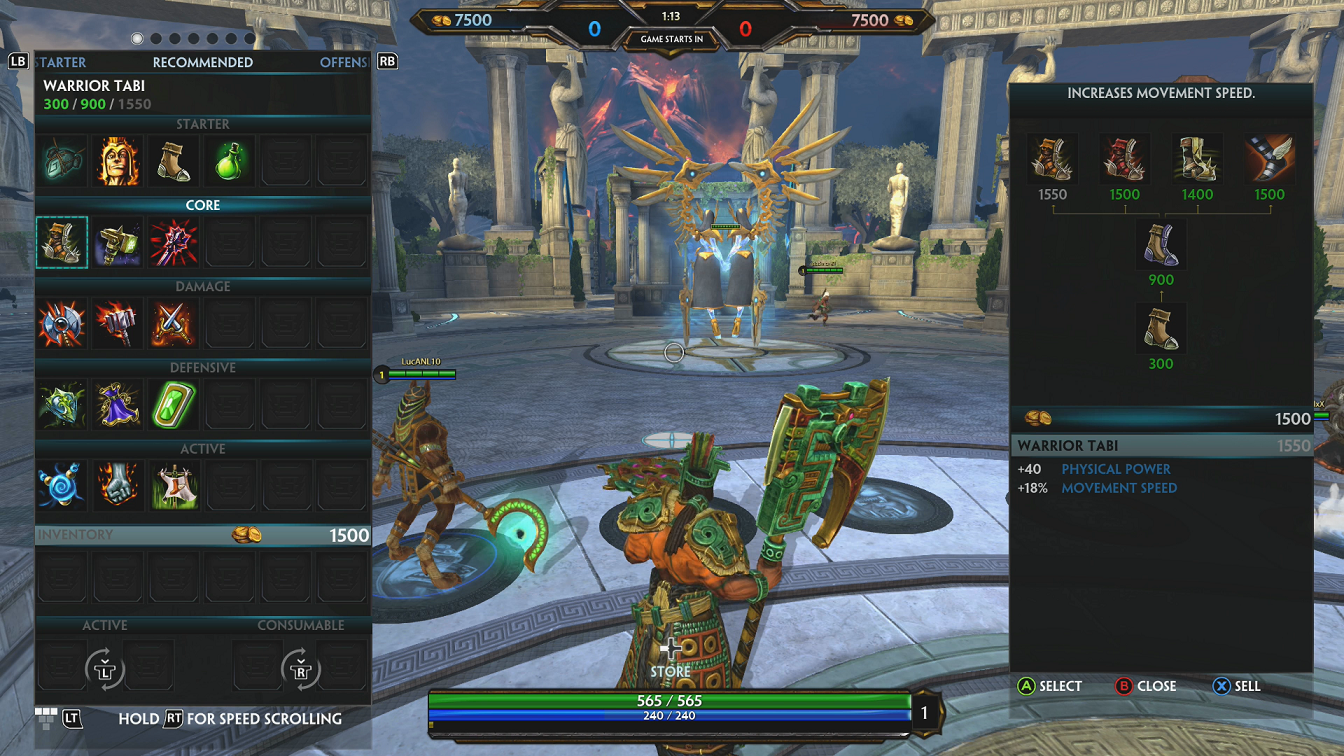 In terms of replayability, 'SMITE' has much to offer. Aside from the large pantheon, there are several distinct game modes. Each of them are MOBAish, but offer something different than the standard 5v5, 3-lane format. Arena is just as it sounds, with a small map that turns into mayhem very quickly as heroes brawl it out without pesky towers and jungles getting in the way. Assault mode grew on me quickly. It has only one lane, no jungle, and players cannot return to the base unless they die. This means that running away has limited value, and so players regularly fight to the death. Siege mode has two lanes and a small map, and heroes are encouraged to push siege weapons towards the other base for increased damage. Joust is another favorite, with typical MOBA objectives but only two lanes and teams of 3 heroes.

The only area in which 'SMITE' falls short is the visual side. It looks like a dated fantasy MMO that hasn’t received much in the way of graphical upgrades over the years. Character models tend to flicker and stutter in a non-latency way, spell effects are underwhelming, and environmental textures are blah. That being said, lag is rare, matchmaking is quick, and abilities typically work as they should.

'SMITE' demonstrates that the MOBA genre can survive on console without making any gameplay sacrifices. It is very promising, and the fact that it has been in release for so long on PC means that even in the beta, the content available is sizable. With some smartly varied modes and sedate purchasing, 'SMITE' is a MOBA that does not feel entirely like a MOBA, if that makes sense, and is very fun to play. In theory, the game should only get better from here.