EA Access Launch Review: The What, How and Why

The Xbox One exclusive program looks to change the business model.

Editor's Note: Electronic Arts' new Xbox One exclusive EA Access program is out of beta, and thereby ripe for a review.  As an ongoing service, it's likely to undergo major changes. Expect updated posts to follow significant updates to the program.

The Vault is such a strong, comforting word. It expounds confidence of the unbreakable, that a $5 monthly subscription is all you need to be safe in your gaming future. EA Access, EA's dive into the digital marketplace, wants you to wrap yourself in the EA brand of games and find safety in the Vault - the collection of games freely accessed by EA Access members. You see? Even in the first paragraph, the letters E and A appear next to each other in full capitals more than anything I've written in the past year. This could be a very large step for the titan publisher their massive audience, but is it the next step for you? For me, it was four free games and unanswered questions about the next few months.

Buying into EA Access and booting up a 'Madden' game for the first time in ages, hearing the "It's in the Game" line like an echo from my past, I couldn't help but feel a twinge of excitement at this new proposition from EA. Then five minutes went by and I remembered I hate 'Madden' games. 'FIFA 14' isn't so bad. 'Peggle 2' is amazing. Then, of course, I already owned 'Battlefield 4.' Calculating the value of EA Access is absolutely a personal thing, seeing as how the benefits are both specific and relatively minimal, so you're going to need to know what you're getting into. At this point, it's no "Netlfix for games," but it very well may save you some cash.

Introduced, beta tested and fully released in the past month, EA Access is a subscription service allowing members purchase-free access to a limited collection of its Xbox One releases. A subscription costs $5 a month, with the option for a one-year buy in at a 50 percent discounted price of $30. 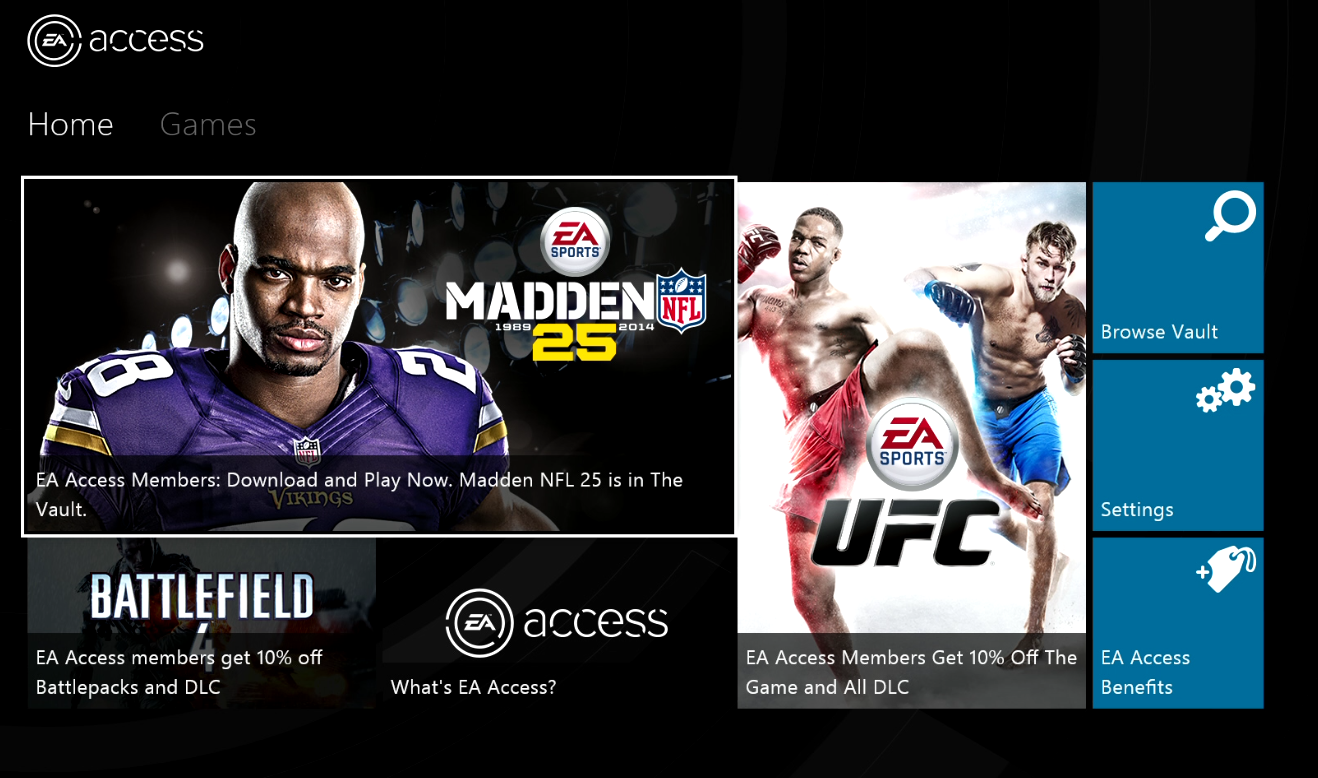 Also, as of this writing, only four games are a part of the EA Access "Vault": 'Madden NFL 25,' 'FIFA 14,' 'Battlefield 4' and 'Peggle 2,' all of which released on the Xbox One in the opening months of the console's debut. More titles are planned for the future, and that's as specific as EA is getting right now. EA Chief Peter Moore made promises to CVG about the Vault, though:

"New game additions will be determined by franchise and timing," he said. "We have to make decisions along that way, so there's no template, like 30 days after a game ships it goes into the Vault," making note that the Vault would feel "substantial" in its offerings, as in AAA titles and not afterthought titles. "I think one of the key things is that once a game goes into the Vault it stays there, it's not going to be taken out, that's a commitment we've made."

Moore's stance on the perminance of Vault titles is clear, though the language in the terms of service for EA Access allows for the opposite.

But access to the vault is not the only benefit. Members receive a 10 percent discount on all Xbox One EA digital purchases, including full games not included in the vault. It's worth noting that none of the four vault titles come with any DLC, and this is likely where much of the cost-benefit comes into play for EA. It's a way to profit on the DLC of last year's games and, of course, encourage the purchase of new EA games. The $5 subscription fee is not the end game.

Playing to that tune, members will also be able to try EA games five days before wide release on the Xbox One. EA's original wording on the subject refers to this perk as Trials, so it's unlikely to be the full game up for demo. Here's the official word, from EA's FAQ on EA Access:

"Each game is different, so each game’s trial will be, too. In some titles you’ll be able to play one of the game's modes for a limited time, while other times you can jump right into the full game. And since you’ll always be playing the real game, any progress you make will carry over so you can pick up where you left off on launch day."  For 'Madden NFL 15,' earl access means a six hour trial. We'll have to wait to see if the trial offerings are similar for the already announced 'NHL 15,' 'FIFA 15,' 'NBA LIVE 15,' and Dragon Age: Inquisition.'

It's even more unlikely that brand new releases will see inclusion in the vault for a multitude of months, even years. Exactly half of the EA games released onto the Xbox One are available in the vault, half are not (but still discounted through the service) Those not included are 'NBA Live 14,' 'Plants vs. Zombies: Garden Warfare,' 'Need for Speed: Rivals' and 'UFC.'

One notable exception to all of this is 'Titanfall,' a game published but not owned or developed by EA. Right at the bottom of the official EA Access page it's established that all 'Titanfall'-related digital products, including the game itself, are excluded from EA Access benefits.

"Check this page often for EA Access updates and any future exclusions," it explains, innocently.

How Does it Work?

EA and Microsoft have integrated EA Access into the Xbox One Games Store extremely well. It even looks like an extension of the store, rather than its own application. Once you've purchased a subscription, the Games Store automatically registers your benefits and allows you to download vault games, as if you own them, from the store. Nothing is different between this version of the game and the one you'd purchase without EA Access members. They are one and the same, except you technically don't own anything installed as a part of the vault. 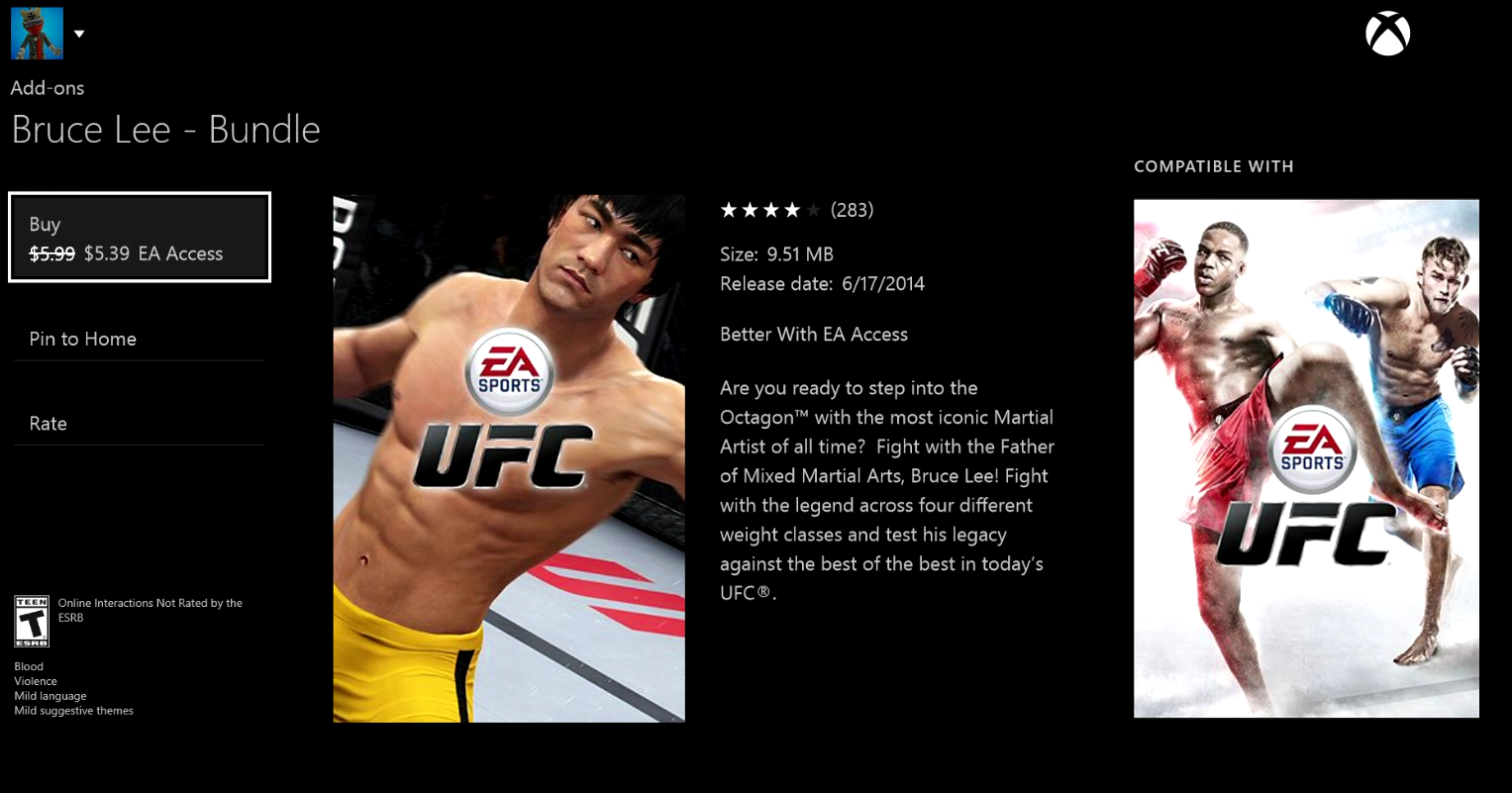 The same works for discounts on those other four games, and DLC and microtransactions compatible with any EA game on Xbox One (vault or not), albeit you do own these products in the eyes of the Xbox Games Store. Anything from 'UFC' character packs to 'Battlefield 4' expansions are presented with a strikethrough on the original price, the lesser price and the words "EA Access."

One caveat – the 'Plants vs. Zombies: Garden Warfare' microtransactions (coin packs), which you can access directly through the game, are discounted but aren't presented as such. When accessing the Games Store through the game, a system-level black band pops up over the game, allowing the player to make his/her purchase with minimal effort. For EA Access members, the discounted prices are there, but little else explains that you are in fact receiving the discount. The same thing happens with 'Peggle 2' microtransactions, so it's likely the same for all transactions performed in this manner. It's a small issue and likely won't affect much of anything, but it could use subtle improvement. 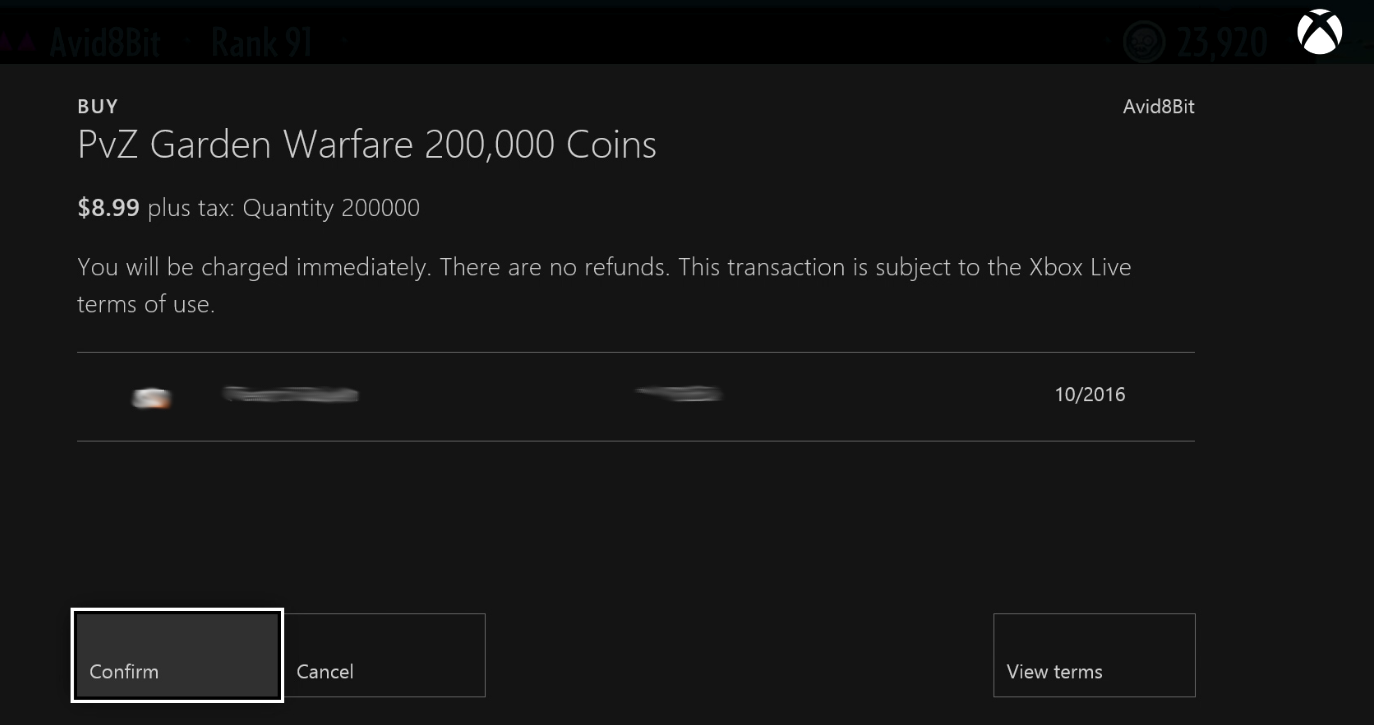 Is it Worth It?

Of course, it depends. This isn't GameFly, nor is it Netflix, as both offer libraries of their respective medium that are countlessly massive to the average consumer. You'll never run out of content when using those subscription services, but with EA Acces, in its current state, you absolutely will. The only question that remains: will you make the most of it? Will you play three of EA's largest games, albeit released during last year's cycle, and maybe even some 'Peggle 2?' If you're a 'Battlefield 4' guy likely to partake in content packs and XP boosts, you'll make your money back in discounts alone. If you enjoy sports simulators, I doubt EA Access will ever not be worth the $30 bucks a year. Especially, for 'FIFA' and 'Madden' enthusiasts, this might just be the best way to get your yearly fix, even if it's just the discounted version.

If you're looking for something akin to Micrsoft's Games with Gold or Sony's Playstation Plus free games offerings, you're likely to be disappointed. EA has neither the breadth of content to support the voracious habits of most gamers, nor the desire to offer brand new games up for free. You could try to stomach the wait for new games to go free long after their initial release, but even that's no guarantee. I'd love to load up 'Need for Speed: Rivals' right now, but EA has not deemed it so. Buying into EA Access gives the publisher a lot of power over you.

It also encourages you to make purchases you might not have in the past. That's the rub. Once you commit, there's the subtle shift of preference for EA games you probably can't escape, or don't even want to. The other cruel trick – if you opt out of the membership, but have purchased DLC for games in the vault, you then own DLC for games you no longer have access to. You'll have to make a full, undiscounted purchase. As a member, you can't purchase games in the vault. You can only install them.

Right now, it's a tough sell to the average Xbox One owner, but a no brainer for people who enjoy 'Madden,' 'FIFA' and 'Battlefield,' but, for some reason, don't already own the latest versions of those franchises. The problem is, the latest versions of those franchises are about to change, and EA has spoken virtually nothing on how EA Access will change with them. (See Peter Moore's comments above.) For something that's being sold as a monthly subscription, it's still prety unclear what's going happen in the next few months apart from the digital EA Games discounts. With the vault somewhat small at launch, EA Access could be considered a glorified paid discount program, one in which users need to keep purchasing in order to justify a subscription.  If you're buying the 'Madden 15' this month, it should be a great test case for  For this reason, I'm recommending most people hold off until EA becomes a little more transparent or more games are added to the vault.