Unlike last year, 'FIFA 15' is coming to the Xbox One long before winter, and there's no doubt that football fans the world over are more than ready to tear into this year's game. Also happening this year is EA Access. Not only can EA Access members get a six hour trial five days early on the Xbox One, but they also 10% off of the digital Xbox One version.

Even better, both EA Access members and regular Xbox One owners can now pre-order the digital version direct from Microsoft here. That digital pre-order will be, between now and the release date, available to pre-load, and thus, not unlike this week's 'Destiny' release, the digital version of 'FIFA 15' on the Xbox One will be ready to go day one.

Without debating the full merits of physical versus digital ownership, buying the digital version of 'FIFA 15' on the Xbox One means being able to fire up the game anytime, no disc change required, and for some certain enthusiastic 'FIFA' fans, that means no worries about a scratched disc.

Those interested should know the differences between the two available digital Xbox One versions: 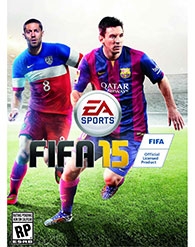