'amiibo,' Nintendo's Game-Crossing NFC Figurines, Is Out This Year

Nintendo demonstrated its NFC figurine plans during its briefing today, promising an official release alongside 'Super Smash Bros.' for Wii U this holiday season. Though initially compatible only with 'Super Smash Bros.,' the figurines are designed to function across any title Nintendo wants to program it for.

'Mario Kart 8' and the upcomming 'Captain Toad: Treasure Tracker,' 'Yoshi's Woolly World' and 'Mario Party 10' are all planned to have connectivity with amiibo figures. However, that doesnt' mean they'll act the same in every game. Watch Nintendo's official video on the platform for a clearer image on how they'll work:

As you can see, your Mario figurine is meant to be his own character in 'Super Smash Bros.,' who fights against you, other people's figurines or AI characters, leveling up and earning abilities. How this kind of constant upgrading will work in other games remains to be seen, though 'Mario Kart 8' doesn't seem like it would be too far a stretch from what's happening in 'Super Smash Bros.'

A 3DS NFC reader is currently in development, and once released will allow any amiibo figurines to interact with the console. Expect future 3DS titles, and possibly past ones through updates, to be compatible.

Right now it looks like 10 figurines are being developed for 'Super Smash Bros.' Kirby, Yoshi, Samus, Peach, Wii Fit Trainer, Mario, Link, Donkey Kong, Pikachu and the Villager from 'Animal Crossing' are all pictured in their figurine form. 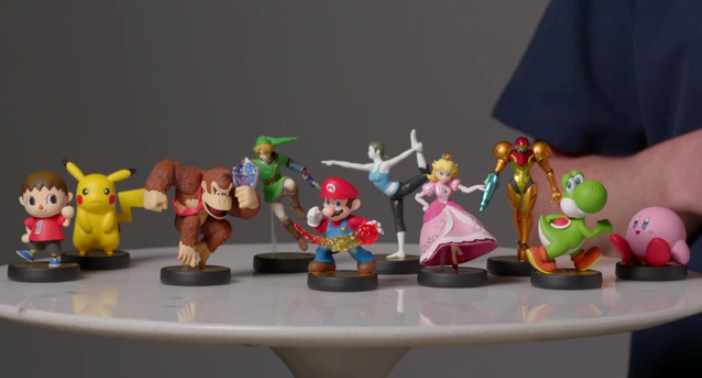