Clutching Up: Here's to The Winners of the Call of Duty Championship 2015

I started this weekend an eSports Newb, but was instantly caught up in the human drama and technical skills required to compete against the world's best 'Call of Duty: Advanced Warfare' players. There's something inherently captivating about the types of people whose passion and dedication have led them to the professional area.

If first day of the Championship was chaotic, whittling away half of the 32 teams, the second day was an epic bloodbath (though we did get a chance to learn more about how MP Levels are designed and vetted). Frontrunners found themselves scrambling to survive in the Lower Bracket where old rivalries flared. As I tweeted yesterday, Denial's Clayster is a young man who was cut from Optic Gaming earlier this year, and he was able to personally defeat them. I'm sure there were dozens of such personal grudge matches. I couldn't possibly know them all, but you can see it in the game play. 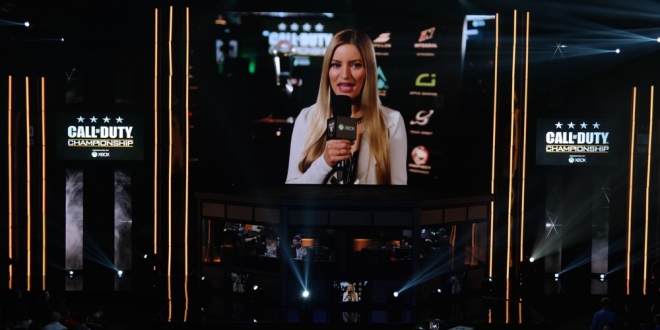 And Then There Were Three

The final day. Three teams left. Denial eSports and Team Revenge opened up the day with the Upper Bracket Finals, the loser of this match destined to drop down to face FaZe Red in the Lower Bracket Finals. Everyone burning to get all the way to the Grand Finals. Burning to win the top $400,000 prize.

Denial started out the first game strong, overwhelming Revenge in Hardpoint. From the beginning it was Denial's match to lose. But then Revenge came back strong, winning Search & Destroy 6-4 to tie things. up. Denial then won Capture The Flag, taking the 2-1 lead, only to be answered by Revenge in what some called the best Uplink game ever played.

The match stood 2-2, Denial fighting not to lose momentum. Another round of Search & Destroy. Denial instantly racked up a 3-0 advantage. Their game to win. Their trip to the Grand Finals all but assured, until Revenge came back swinging, trying everything up, pushing S&D into round 11, but it was Denial who triumphed.

No time to rest, Revenge stayed on the Main Stage to take on FaZe Red, who took the Lower Bracket by storm, eliminating Optic Gaming, Automatic Reload, and Prophecy. Revenge vs. FaZe Red begin with a nail-biting Hardpoint, Revenge pulling off a huge comeback. Game 2, Search and Destroy, was equally tense, with Revenge taking this round, now leading the match 2-0. The next game is Uplink. FaZe Red's last chance to stop the bloodletting. To turn the momentum. To stay in the tournament.

FaZe Red took an early lead, but could they hold onto it with so much time left on the clock? Yes. The first half ended with FaZe Red up 10-4. Revenge answered quick, putting point after point after point up on the board until they two teams were locked in a tie. Seconds ticking away. Everyone trying to get a point. But Revenge couldn't pull together for the win. Faze Red won game three in overtime.

But it was a short lived boost in the team's chances. The final game in the Lower Bracket was Capture the Flag, and it was Revenge's game the whole time. They pushed up to a 4-2 lead over FaZe and FaZe didn't have the energy to pull back. Revenge is going to the Grand Finals. 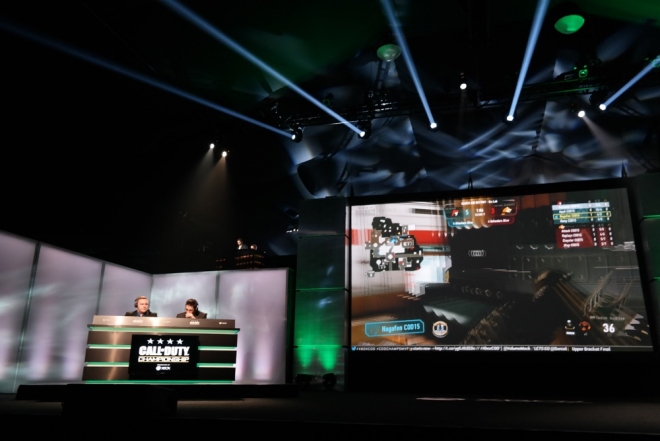 Dropping this Tuesday on Xbox One, 'Ascendance' boasts an all-star voice cast and four new maps. We were treated to an early sneak peak trailer of the new 'Infection episode, and it looks fierce. Zombies. Eco-Suits. Everything you love about 'Advanced Warfare' PLUS and new story PLUS new maps. #Sold 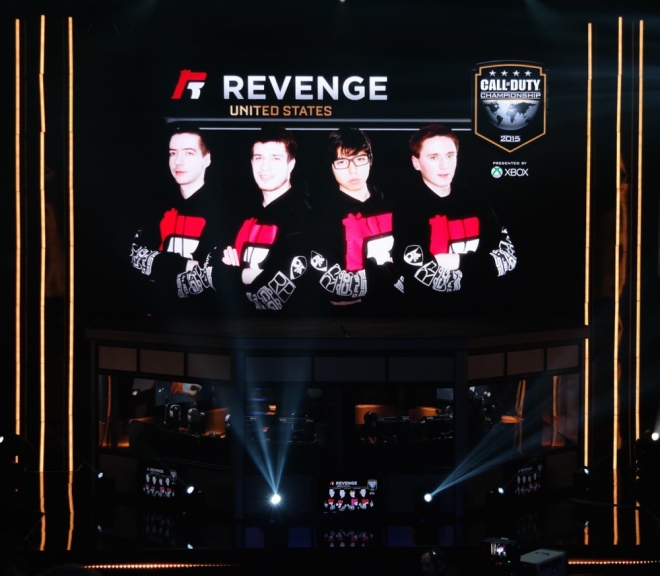 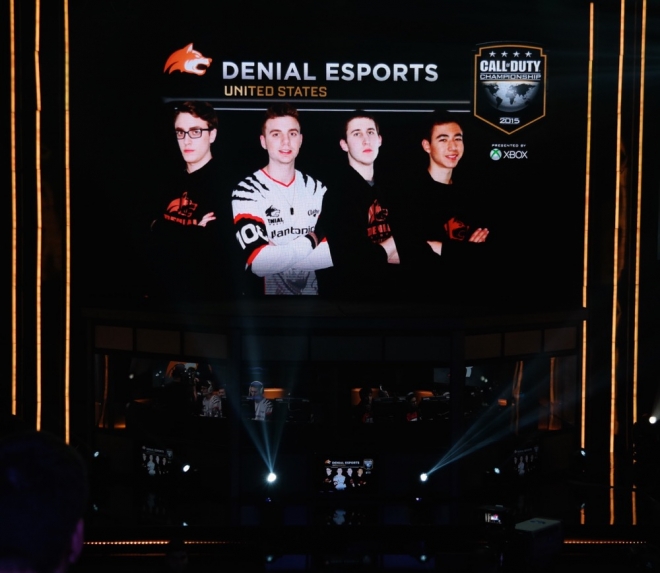 Denial eSports vs. Revenge Gaming. It's all on the line now. The winning team's taking home $400,000 in prize money along with the trophy, the ring, and all the bragging rights.

But there's a bit of complication here. The Call of Duty Championship is a "double elimination" tournament. It's fantastic because it gives Losers a chance to stay in the competition, dropping down into the Lower Bracket which was filled with past champions. However, the complication is this:

If Denial, coming from the Upper Bracket, wins the first (best of five) match, they win the whole prize and are crowned 2015 COD Champs. For Revenge to take home the win they have to triumph in TWO best of five matches. One to give Denial their first loss and even the playing field, the second to actually crown themselves the King of 'Call of Duty'.

Time to clutch up, bros.

The first game is, as always, Hardpoint. Denial absolutely CRUSHS Revenge, the game ending over sixty seconds early because of the point spread. It's Denial's tournament to lose now. Up 1-0, they only need to win two more maps to take the title. Next up was Search & Destroy, set on the DLC map (a first for CoD Championship) 'Drift,' which includes a freaking avalanche that can kill you or block your team. Revenge took an early lead and claimed victory, tying the match at 1-1. Next up was Uplink where Revenge pulled off an impossible comeback, taking the series to 2-1...until Denial roared back with a big Capture The Flag win, again tying the series (2-2).

It was all down to Search & Destroy on the Riot map. Another tight fucking game, anyone's to take, but Denial pushed forward, securing a 5-4 lead and ultimately winning 6-4.

Ladies and gentlemen: Denial eSports, the 2015 Call of Duty Champ.

And Clayster, is the Call of Duty Championship 2015 MVP.

Congrats to all the players involved. It was a tough tournament, a dramatic tournament, made all the more exciting by the simple fact that it's only the third such championship. eSports, though in its infancy, is growing fast. There's no telling how far this sport will go, which is a pretty great.

In a universe where our very best cyclists and baseball players are doping to win, where our best football players are ending up with permanent injuries that tragically haunt them later in life, it's amazing there's a sporting realm where talented individuals can compete without having to do any kind of self-harm.

Welp, that concludes our Call of Duty Championship 2015 coverage.

Thanks so much for reading and following along here at High-Def Digest. We'll see you right back here for future events and, of course, the latest in HD gaming news and review. Cheers.