Reality Bytes: 'Rez Infinite' Will Be Getting A Very Real Physical Edition

But not on retail shelves.

Unless you were one of the smart ones who smartly owned a copy of the game when it originally released on Dreamcast--I am proud to say I am in this category--chances are you've never known 'Rez' as anything except its polished, well-received, but still obscure Xbox Live Arcade port. Well, with 'Rez Infinite' about to take over the PS4, Tetsuya Mizoguchi has decided to  put the game back into players' hands. 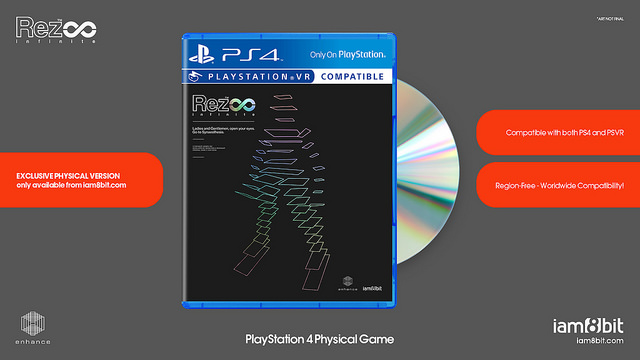 Thanks to the efforts of iam8bit.com, the game will be getting a limited run of physical copies, sold exclusively through their website.  They'll run you a wee bit more than than the digital version at $40. They'll be a small run, so who knows when the link below will go dead altogether, and even then, the site warns there IS the chance you might not get the game on launch day. Still? WORTH IT. Especially with the added nifty benefit that the physical discs will be Region Free, and yes, this one will be PS VR compatible too.

That's not even the extent of iam8bit's goodies for the game, either, since they're also designing a really cool-looking 2-album vinyl soundtrack. that'll include all sorts of awesome, including an additional vinyl containing the new music composed for 'Infinite's new stage, Area X, and an art/retrospective book full of gorgeous concept art, and interviews with the original dev team.  That'll be a little pricier at $75. But ALSO WORTH IT. Take a look at the goods right over here.

You can find the latest info on 'Rez Infinite' linked from our Video Game Release Schedule.