The Problem With Reviewing 'Destiny' – Impressions and a Review in Progress

'Destiny' is sure to be this year's most massively divisive game.

'Destiny' is a Massive Game With Massive Expectations

It should go without saying that a game like 'Destiny' that has dominated the industry through the the last several months, comes in with heavy expectations. Even after a large public beta, there has been a large community playing the game this week that have been voicing criticism as though the game was only a series of missteps. I can't help but peer, as I wrestle through strikes and story missions in a jovial struggle in 'Destiny, to the dissenting comments online over the perception of light-content and a lackluster story. Fortunately, when reviewing the game, (much like when playing it) all of those opinions are quiet, temporarily inaudible as the game sits ready to be played and judged on its own. It should go without saying that the (too high) expectations problem won't unduely influence a review, but right now, it needs to be said.

So now, let's take an overly conscious look at all the problems with reviewing 'Destiny,' and maybe they won't infect the final verdict. The bottom line is, after completing the story and doing a fair bit of endgame loot-hunting, I'm having a blast. I just want to clear the air and address some common critiques before presenting complete conclusions about 'Destiny' in a proper review. 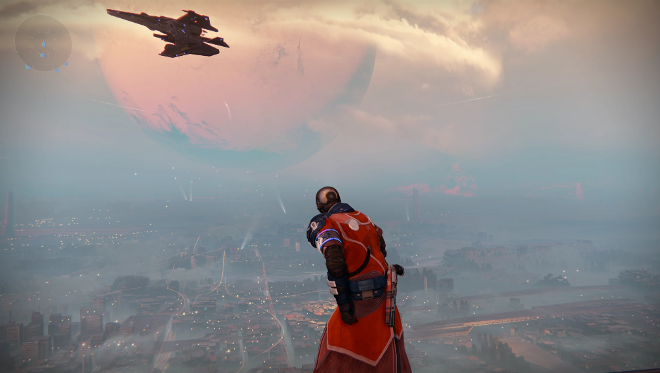 The Genre Comparisons Are Useless, But Let's Do them Anyway

Let's call 'Destiny' an MMO, and thusly be disappointed with the amount of content. There aren't enough worlds and the character classes, though enjoyable to play with and upgrade over the course of a playthrough, aren't diverse enough to fill out roles in a way that an MMO ensures every player feels completely special.

Let's call 'Destiny' a first-person shooter adventure, and despite pitch perfect shooting mechanics and enemy AI on par with what many consider to be the standard-bearing 'Halo' series, the story does little more than set up a larger universe no doubt to be expanded in the years of 'Destiny' sequels and expansions to come. It may end up being interesting in the long run, but right now there isn't a line of dialogue I could point to as either a starting point or ending point for something remotely interesting. Like 'Diablo' or 'World of Warcraft,' this story exists mainly to get you from point A to point B, which in itself is the only mission structure present in 'Destiny.' But this is the first-person shooter paragraph, so we have to be disappointed in the story, rather than accept it for the role it's meant to play.

Finally, let's compare 'Destiny' to the 'Borderlands' series, and find that the loot is neither as varied nor plentiful in the humorous, if haphazardly drawn-together RPG. Where Bungie might excel in polish, environmental design, mechanical prowess and, of utmost importance, the many interlocking online systems at play here, Gearbox settled with superior and humorous writing and an explosion of content and guns at your disposal. If you are so inclined, you can find 'Borderlands' to be the more worthwhile purchase. 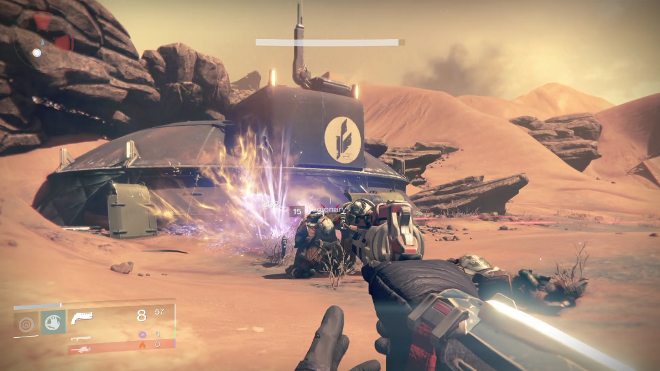 As a matter of fact, in light of these comparisons, you can always find 'Destiny' to be an inferior experience. Sometimes I'm struck with these inferiorities, yet never is my enjoyment of the game affected by them. That's because, when I'm actually playing the thing, I throw the comparisons out the window and forget that this is supposed to be the greatest game I've ever played, and instead I plung into the heart of a new game that mixes great pieces of other games. I forget what genre it's supposed to be and remember to enjoy the game for all the little bits of those genres it meshes together.

But that's also an excuse for Bungie, in a game that utilizes a series of systems to rinse and repeat a fairly small set of missions and strikes, those missions specifically designed for three players and resulting in long, bullet-sponge bosses. Yes, it's the loot and promise of a more powerful character that motivates you past the story missions. Are we still in the MMO comparison paragraph, or is that not good enough? Depends on who you ask.

The Innovation of 'Destiny' is Not One Thing, But the Interconnectedness of Everything

We crave newness in this young and explosive medium, but often we only crave that newness in the most obvious of ways. Yes, 'Destiny' does play it safe across many of its systems and mechanics, and the reason for that is two-fold.

Optimism brings you to the first. It reveals what might be the only great thing about the game. Everything works together, across competitive multiplayer, across the loot, across the mission structure and across all the ways you can play with your friends and strangers throughout the entire experience. But to do this, it seems, Bungie needed to ensure a high quality of those individual systems by relying on the stuff that's proven to work. 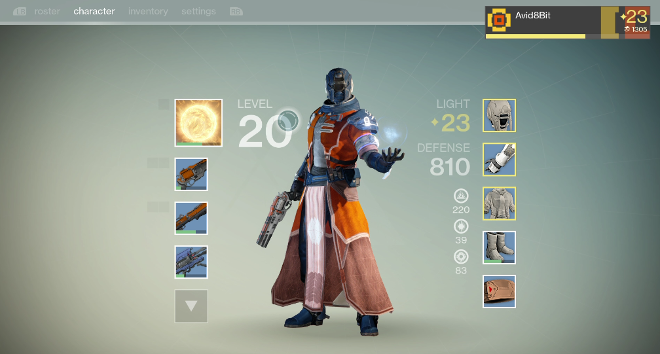 The weapons, if lacking in imagination, are never so overpowered as to make combat with enemies boring or against other Guardians online frustrating. The character classes and their subclasses are simultaneously deep, stereotypical, but transferrable across modes with the same smoothness as those weapons. Fireteams can do everything in the game together, so there's no jumping in and out of parties as you struggle to get your experience just right. The search for loot is equally potent across all modes as well. You might find a legendary item after a competitive match as likely as you will at the end of a strike. Playing this game in any way you want is the way you play the whole thing.

But, just as I must shrug off the genre comparisons in my review, so too do I need to escape the marvel of interconnectedness in my evaluation of the game's success at bringing me joy and satisfaction. Above all, the smoothness of it all, especially tied with the fact that all these online systems didn't crumble and fall under what is likely the largest launch of any game this year, are appreciable aspects in the flow of the game. But the intellectual consideration of these systems, rather than their actionable execution, belongs outside of the review. It belongs here, and here it will stay. 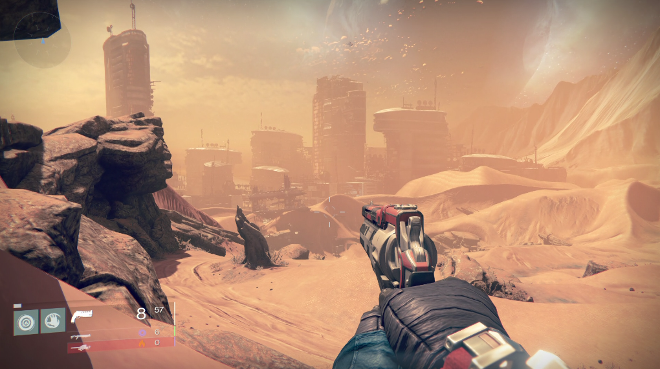 As for the second reason 'Destiny' plays it safe, the masses must be pleased. That's the cynical side. For every dollar invested, polish and playability take precedent over blatant mechanical innovation. That brings us to the most ironically damning influencer on 'Destiny' reviews:

This number is a plague. I don't remember where it came from, but somebody said it once and now it's the number tied intimately to 'Destiny.' How much money and where it went are largely immaterial though. The number $500 million does only one thing – skew perception, distort reality. It is an excuse to be disappointed, even if the experience is enjoyable, and it's a reason to dislike the game before you play it, because it came into this world at an advantage, and didn't necessarily blow us away. I will forget the number $500 million.  The much more important number is $60, or even $150, whatever the cost of entry. $60, without microtransactions or MMO subscription fees, is a reasonable price of entry, especially for a new shooter, and should never be considered $500 million.

Finally, 'Destiny' Has Only Just Begun

This is one area where the MMO comparison is apt. I'm not reviewing 'Destiny,' I'm reviewing the first week of 'Destiny,' a laughable portion in the wake of Bungie's promises for future updates, both free and paid. The developer has already proven this commitment, updating the game every day with new twists on old strikes (increased lightning or melee damage, for example), so those who want to keep playing will likely fail to hit the dead end of content possibly feared. In the end, of all the things we can admit and move past in our evaluation of 'Destiny,' it's that the game will grow, and likely will be remarkably different in 6-12 months in MMO terms. With concerns over the amount of content reigning supreme, that promising growth is like a set of future gifts that ought only to make the game better. 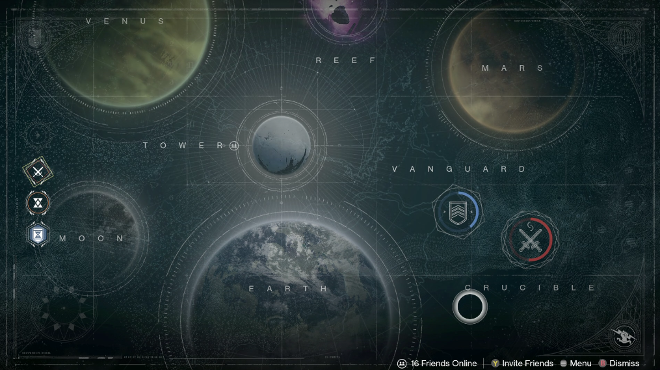 After one week, I'm not ready to conclude with finailty on the what the game offers. Luckily, all things being equal, so is everybody else. Still, that six-player raid, what Bungie has commonly promised as the ultimate end-game challenge, is just over the horizon. It could change everything or mean nothing at all.