Rewards promised for the skilled.

After just two days live, the 'Destiny' beta is seeing its first major update, which while important in itself is also a bit enlightening on how planned progressive updates to the final game might function. The competitive multiplayer arena known as the Crucible will open up The Iron Banner, a special area where players can battle it out using advantages gained leveling their characters, exclusively featuring two new maps. 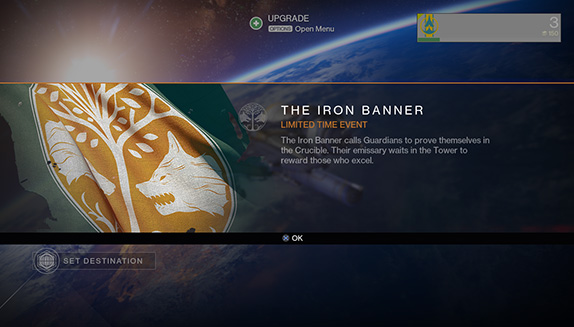 "Welcome to The Iron Banner. Lord Shaxx isn’t the only legendary Guardian tasked with hammering you into fighting shape. When the time comes, new doors will open in the Tower. The Iron Banner crest will be set alight, and Lord Saladin will emerge with new challenges to overcome, and a new way to earn honor and glory for your Guardian.

The Crucible proper is all about putting your skills to the test. Iron Banner requires another crucial element: Power.

Lars Bakken knows a thing or two about competitive play: 'Bring your absolute best gear because we turn on Level Advantages. That means your Attack and Defense ratings matters in Iron Banner matches.'"

It's all sounds very cinematic. At the bell of 2 p.m. PST on Saturday, every player should recieve a notification in-game about the opening of The Iron Banner. The thing is, it only lasts two hours, but it's also the only way to play some brand new maps, inclduing a favorite from the alpha, Rusted Lands. The other is Blind Watch, the first time anybody's stepping foot on 'Destiny's' Mars.

And, according to Bungie, players can earn rewards for their Guardian in the accomplishment of Iron Banner objectives within the two hours the mode is live. They mentioned a "bad ass assault rifle."

Bungie made no mention of the Xbox One or Xbox 360 betas, which wont start until July 23. Presumably, the Iron Banner will open up at some point for those players as well. They did leave us with this, regarding the 26th of July, the second-to-last day of the beta for any console:

"You want to be there for that day. Report for Beta testing duty at 2PM Pacific. Your rewards will be handsome and permanent."