The whole series will be on PS4.

NIS America has announced that 'Danganronpa Another Episode: Ultra Despair Girls' will be making its way to PlayStation 4 next year. The previously Vita-exclusive action game will see a digital and physical release in Summer 2017 for both North America and Europe. The shooter takes place in between the first and second game in the popular 'Danganronpa' visual novel series.

This is great news as both 'Danganronpa: Trigger Happy Havoc' and 'Danganronpa 2: Goodbye Despair' are being ported over to PS4 in early 2017. That means the entire series will be playable on Sony's latest console. A new game in the series is also in the works, set to release in January 2017 in Japan, also for PlayStation 4, so it's quickly becoming the system players will want if they want the complete 'Danganronpa' experience.

'Danganronpa Another Episode: Ultra Despair Girls' is available now on PlayStation Vita, and is coming to PS4 in Summer 2017. 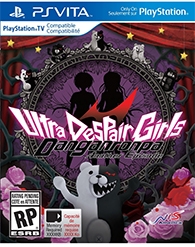