Kevin Spacey is intoning monologues about power again in this latest 'Call of Duty: Advanced Warfare' trailer. Here's to placing bets on, not if, but when it's revealed Spacey is behind that worldwide terrorist attack. The last five seconds of the trailer contain the most interesting bit.

So there you go. Did you see all that multiplayer? Jet packs, tidal waves and intense music are all likely to play a part in the game's upcoming multiplayer reveal, set for Aug. 11. 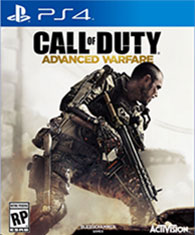