Gearing Up for Another Round: 'Gears of War 4' Multiplayer Beta Impressions

I hope you know I pack a chainsaw. What?

Editor's Notes: 'Gears of War 4' MP impressions based off of the Xbox One beta.

The hotly anticipated 'Gears of War 4' is coming to the Xbox One later this year, and is currently under development by franchise custodian The Coalition (having taken over from Epic). It will be the studio’s first original game. Splash Damage, which also worked on the 'Gears of War: Ultimate Edition' multiplayer, has been tapped to help with 'Gears 4'. With a long promised, high profile multiplayer Xbox One beta having been delivered, it's a good time to see how everything is coming along.

There are two (and a half) modes available at the time of this writing: classic deathmatch, dodgeball, and AI deathmatch, which has bots sitting in for human players. Even PvP deathmatch has bots filling in when a player leaves or drops, so the maps are less lonely. The bot AI isn’t terrible, but even a modestly skilled human player can typically best them one-on-one as they are prone to doing a jig out of cover to pick up ammo and such. 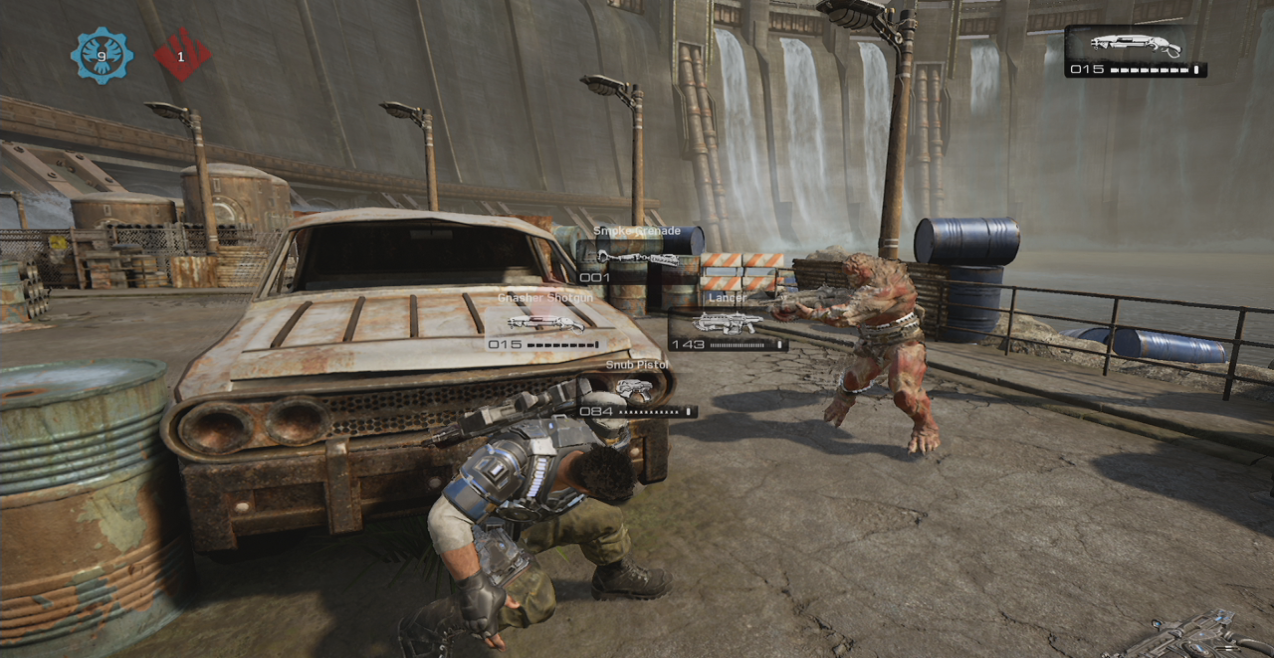 At the core, this is by and large the same 'Gears' that we have been playing since 2006. Each team roadie runs from their spawn points to the power weapon drops, duking it out in close quarters to control the power weapon, which is then used with reckless abandon against the losers who must scatter to avoid boomshot blasts or torque bow sticks. Once that is out of the way, teams switch to the shotgun and move in for the old two-piece (melee/shotgun). Automatic or burst-fire weapons like the Lancer and Hammerburst see little use, as they just don’t do reliable damage. When in a medium- to long-range engagement (uncommon to start with), typically one or both combatants will eventually abandon that strategy and attempt to move in closer via smoke grenades or flanking, and then the shotguns come out for a little circular dance until someone gibs.

Time has inevitably added a few moves to this formula, some new and some borrowed from other titles in the franchise. Players can jump over cover to disorient an enemy on the other side, setting them up for a shotgun blast or chainsaw. I found myself quite surprised when, sitting in cover with a human player on the other side of me, they stood up, grabbed ahold of my character, and brazenly pulled me over the sandbags to their side, where my stunned hero was promptly shotgunned. This new move makes me very leery about going into cover near other players, so I tend to go for the flank exclusively now. 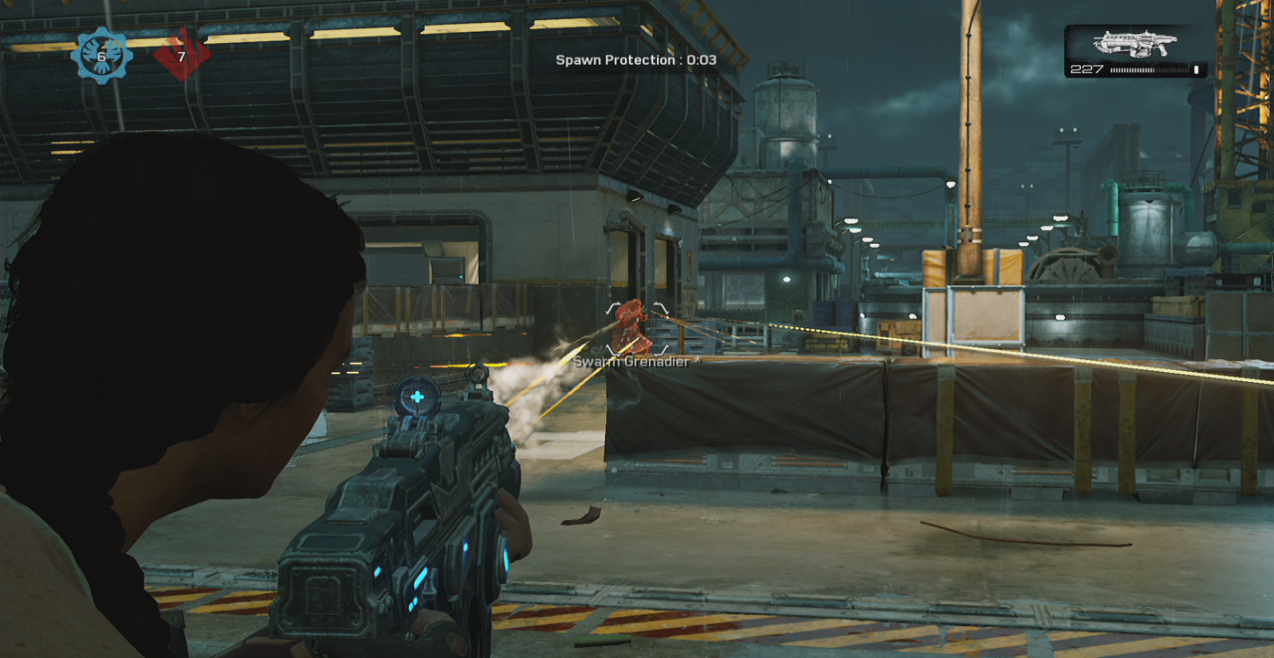 The maps may look a bit different, but functionally they are nearly identical to what we’ve seen before. Cover is liberally placed in a formation in the center, with open or curved areas around the periphery. They are very horizontal, with just a staircase or raised platform here and there to invite a slight height advantage. They may be a bit bigger than usual, but are still easily learned. I liked the Dam map as it has a sort of choke hold near the spawn point, where beleaguered teams can hunker down and focus fire on enemies trying to get inside. Of course, this also prevents the team from getting the power weapon, which is usually capable of dislodging an entire team from cover if used properly. The dropshot is a new explosive weapon I couldn’t quite get the hang of, but there’s no arguing with its efficacy in the right hands. It is a combination grenade launcher and mortar that fires projectiles in a wide arc, and when they near an enemy, can smash down into the ground and explode automagically. They have a distinctive noise when used that I quickly associated with terror, and so would attempt to roll backwards or otherwise escape with absolutely no dignity whenever I heard it.

In between matches, I could select a bounty: a card that would award me bonus experience points if I could fulfill a goal like earning a certain score or just winning. It has been poached wholesale from 'Halo 5' and that is not a complaint, merely an observation. I am rather neutral about the whole system because it doesn’t detract from my gameplay, but it also does not add much. 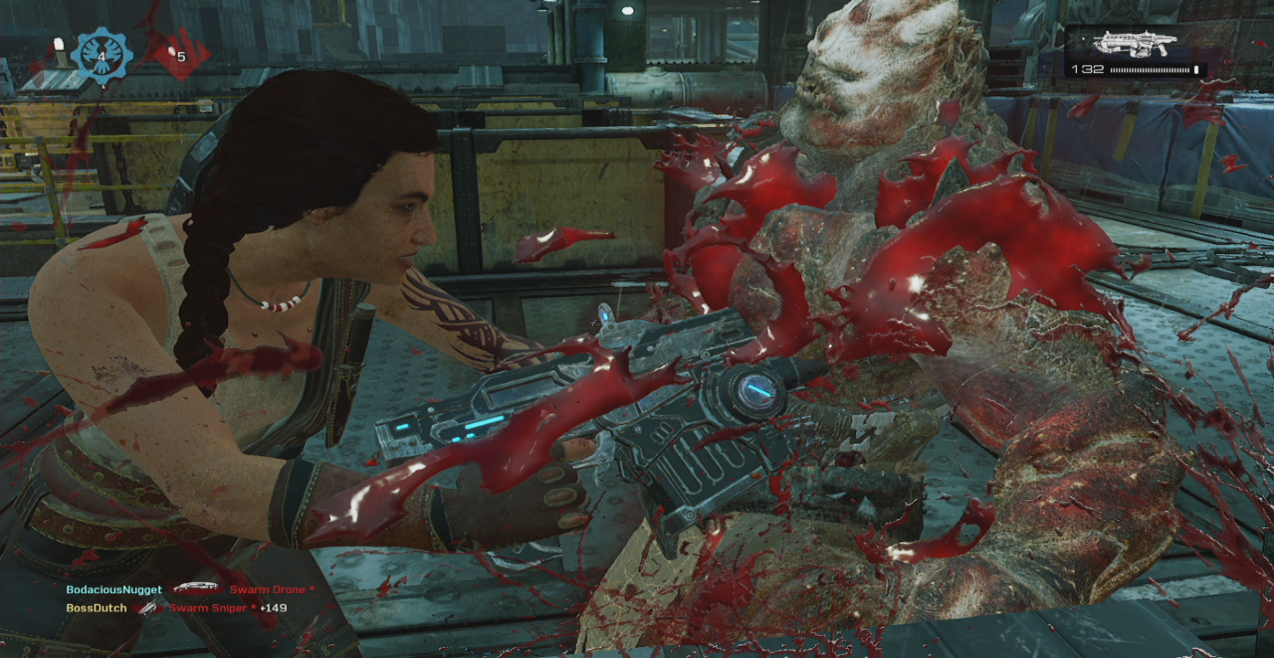 The dodgeball gametype doesn’t use rubber balls for weapons (which was a bit of a disappointment, I’ll be honest), but it is a different take on the old round-based gameplay. Whenever a player dies, they sit out in the order they died in until a teammate scores a kill, at which point they respawn. It can lead to one-sided blowouts, but also the occasional epic comeback where a steely Gear blasts apart two or three enemies in quick succession, allowing fresh teammates to come to his aid and murder the remaining foes before they can do the same. I am impatient and hate sitting out in general when in multiplayer - I would much rather respawn immediately and feed another death to my opponents, so I stuck with the regular deathmatch. Whenever I was getting my ass handed to me too much by humans and would get demoralized, I hopped into the AI deathmatch and chewed up some bots for a while. 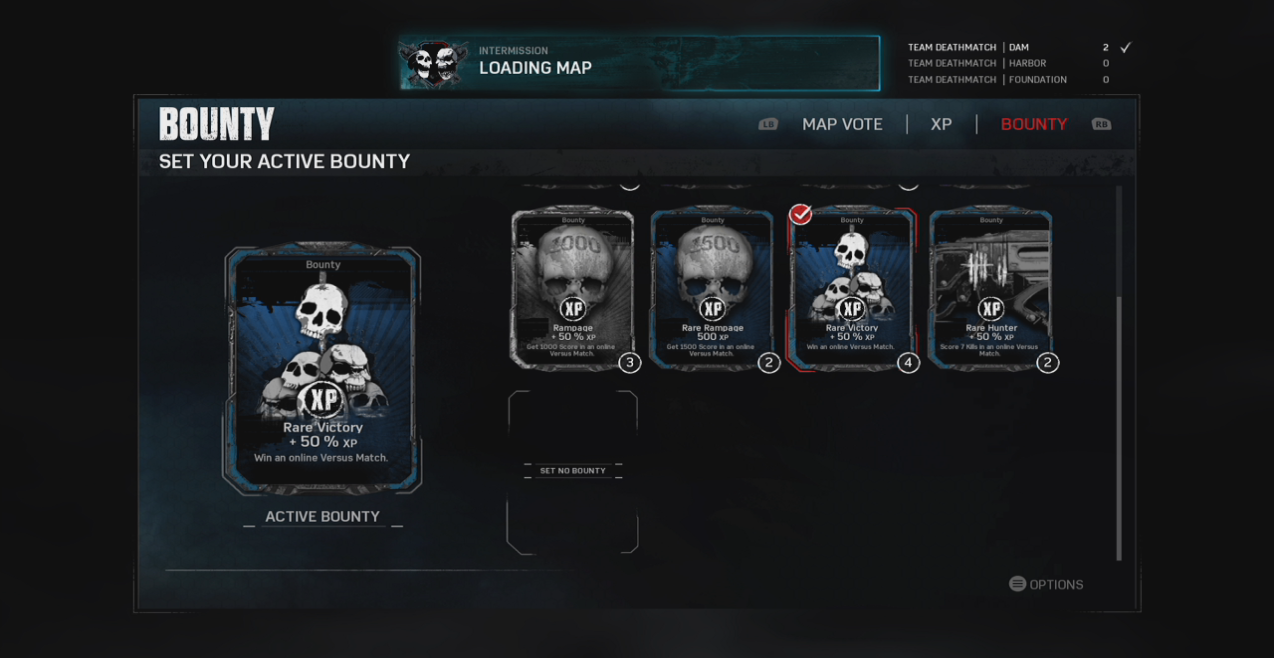 'Gears of War 4' is scheduled for this October, and there may still be time for some bigger surprises. Thus far, the multiplayer experience adheres closely to established 'Gears' convention, which is only a bad thing if you have hated previous versions. If you did, you won’t find much innovation here. But, if you love sprinting around and over cover to deliver judicious shotgun blasts to your foes, you’re going to fit right in.