Most of my days are spent hunched over a laptop working on my carpel tunnel and twisting my back in ways I'm going to regret in ten to twenty years.

Then there are days when I go to movie premieres.

Last Monday, Warner Bros and Dolby kindly hosted the world premiere for its latest feature, 'The Legend of Tarzan'. Walking into the Dolby Theatre in Hollywood California is an odd experience. First, it's in a mall. Literally. A high end shopping center with restaurants and jewelry stores and huts hawking sunglasses as tourists snap pictures from passing buses. But it's also this extravagant venue for musicals and, of course, home to the Academy Awards.

In that sense, the Dolby Theatre is a magical palace of movie geekdom where you get a free popcorn and soda and the fleeting chance to see your favorite filmmakers and stars. The other great thing is the collective sense of buzz. While celebrities fill some seats, you're generally amongst the people who, in one way or another, devoted time to this production, or are in the middle of their own endeavors. That is to say premieres are generally warm rooms where the thrills chill and the jokes land.

Like I said, an odd experience, but a special one I've very grateful to attend.

Since Dolby took over the naming rights from Kodak several years ago, they set their genius pro cinema engineers to an impossible task -- make a venue that was in no way designed for cinema look and sound as good as it can. Today that means a Dolby Vision dual-4K projection system capable for 31fL in 2D (and 14fL in 3D) coupled with a custom Dolby Atmos setup. Dual 64-channel arrays (and processors) are necessary to run overhead and surround speakers for floor, mezzanine, and balcony seating. To be fair, it's not the best Dolby room in town, and some seats are more acoustically placed others, but given the restrictions faced, I'm always impressed. 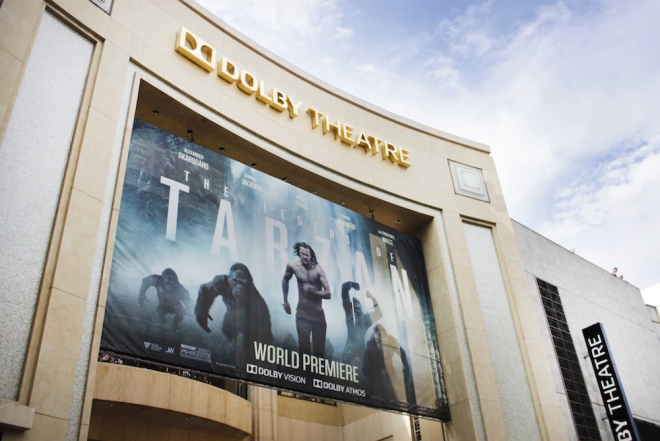 Let me begin by saying I have a huge amount of respect for the folks who made this movie. David Yates absolutely crushed his work in the 'Harry Potter' universe. Craig Brewer is an versatile writer-director (I'm not familiar with the other screenwriter's work). Alexander Skarsgård was unforgettable on 'True Blood'. Margot Robbie stood toe-to-toe with Leo in 'The Wolf of Wall Street' in a star-making performance. Christoph Waltz is one of the best all-time screen villains. Samuel L. Jackson is great in everything (even this). And Djimon Hounsou has an unmatched commanding presence.

But, man, I just couldn't get into 'The Legend of Tarzan'. Dramatically. Emotionally. Tonally. It was all a miss for me.

The basic plot revolves around Tarzan returning to the Congo at the invitation of Belgian's King Leopold II because England is hoping to broker a deal for mineral rights. Tarzan, or John Clayton (Skarsgård) as he likes to be called now, doesn't want to go back for reasons unknown, but his wife Jane (Robbie) very much wants to see her friends in the local tribe. Add in George Washington Williams (Jackson), an American Civil War vet who suspects Leopold might be enslaving the peoples of the Congo, and Tarzan has no choice but return to his past.

Shortly after said reluctant return, the villainous Leon Rom (Waltz) kidnap Jane in hopes of luring Tarzan to his death. Tarzan, understandable pissed off, then sets off across the plains and the jungles with Williams to confront his past, rescue his wife, and possibly save the Congo from slavery.

Much like the most recent Edgar Rice Burroughs adaptation, 'John Carter', 'Tarzan' manages to thrill at times with some wonderful action and beautiful photography -- Tarzan is effectively a 19th Century super hero -- but the filmmakers opted to treat characters' emotional-motivations as secrets rather than clear driving forces. In that sense, this film also features a flashback structure with all the origin story beats we've seen before, and where the scenes themselves are less engaging than the present day narrative and slow the film's overall pacing. There are also some odd tonal choices (Sam Jackson wondering if he should lick a gorillas testicles) and even though Jane has been modernized and she says she's no damsel, Ms. Robbie's character is woefully underwritten. Honestly, if it were my cinema dollars, I'd probably go see 'The Jungle Book' again or just Netflix Disney's animated 'Tarzan' (which admittedly has its own flaws).

That said, if you're curious, completely disagree, or simply wish to stare at Skarsgård's abs for two hours... do yourself a favor and click HERE to find a list of Dolby Cinema locations where you're going to see and hear the best possible version of this film. 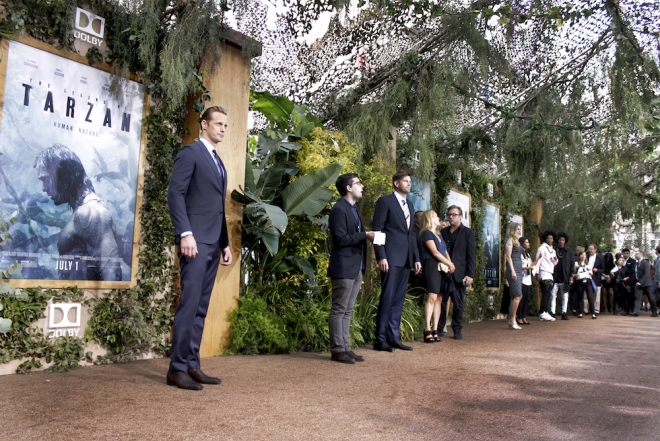 'The Legend of Tarzan' swings into Dolby Cinemas with Dolby Vision high dynamic range graded in the (I believe) DCI P3 cinema color space. While much of the movie has a muted and gritty color pallet -- jungles and Greystoke manner soaked in oppressive mist -- Dolby Vision has such good contrast and black levels that it makes the whole experience much more vivid than conventional digital cinemas. You can see the rich costume colors even in the darkness. Day time sequences are vivid in their own right. The on-location areal photography is some of the most eye-dropping I've seen since the original 'Lord of the Rings' trilogy. Cascading waterfalls dumping into jungle-lined river basins. It's a paradise. And the grassy plains seem to extend outward infinitely. Pay special attention to the brighter skies, where you'll glimpse more clouds and other details that will be washed out in standard dynamic range.

In comparison to other Dolby Vision titles, 'Tarzan' is somewhat limited by its intended color palette (the warmer, saturated 'The Jungle Book' is more classically demo material), but it looked quite good to my eyes. 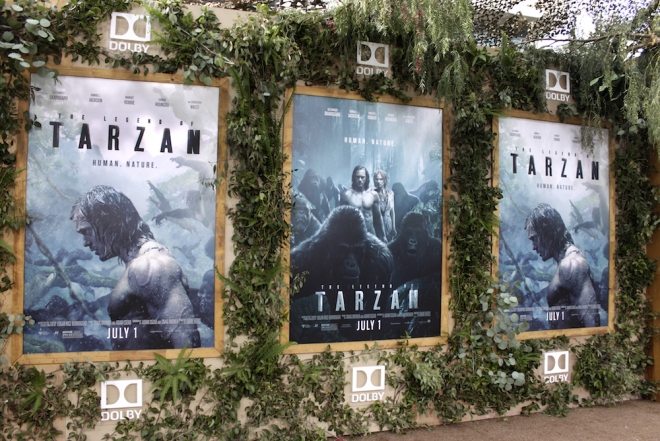 'The Legend of Tarzan' Dolby Atmos mix doesn't evolve the format in any way, but succeeds in implementing Atmos' inherent strengths to bolster the film's technical merits. Surround placement, including bullets and character voice panning, is above average. The Dolby Theatre auditorium is a vast space, but I knew at all times where the characters were going (and what threats were hunting them). Gorilla roars were guttural and deep. And I enjoy the sensation of movement as characters swing through dense jungles. My favorite aural sequence involves rain drenching your senses from the overhead speakers; it was quite effective, even if overall overhead usage is only moderately aggressive. If I had any suggestions, I wish there was a little less epic orchestral music and more jungle environment sonic nuances. Small note. Overall, though, this is a pretty good Dolby Atmos mix and I enjoyed its sonic flourishes more than 'Captain America: Civil War'. 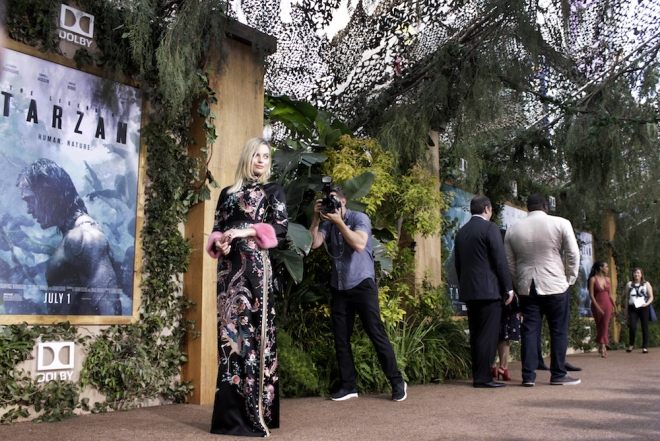 While 'The Legend of Tarzan' wasn't for me, personally, it is a beautifully photographed film with a few thrilling set-pieces. If you're going to see it, I feel no regret in suggesting a Dolby Cinema auditorium. This type of color grading could easily find itself awash in grey-like black levels. Not so in Dolby Vision, which pushes the blacks and brings out dimensional colors even within the sometimes-muted pallet. Bright skies also resolve well. And, though not life-changing, the Dolby Atmos mix is quite good too, offering bursts of action and rain-soaked environmentals that make for an immersive experience. It should make for a nice Ultra HD Blu-ray and streaming experience.

Another plus: after seeing what David Yates did with Dolby Vision and Dolby Atmos the first time out, I can't wait to see how 'Fantastic Beasts' looks and sounds.

Are you going to see 'The Legend of Tarzan'? If so, where?

Discs mentioned in this article: (Click for specs and reviews)
The Jungle Book (2016) (Blu-ray)