This week Dolby treated us to an advanced screening of Marvel's latest triumph, 'Captain America: Civil War' at the AMC Century City 15 on the west side of Los Angeles. A few years ago this particular auditorium debuted as an ETX premium format cinema, which was effectively a bigger screen with overhead speakers. Later it was upgraded to AMC Prime, adding leather recliners as well as a full Dolby Atmos sound system. Most recently, it was again modified to become one of the first 19 Dolby Cinema locations in these United States. (There are also four in Europe and though it is not a Dolby Cinema, the El Capitan in Hollywood CA has both Dolby Vision & Dolby Atmos technologies.)

Dolby Cinema takes the ultra-immersive Dolby Atmos sound format and pairs it with a Dolby Vision dual-4K laser projection system (co-developed with Christie) that projects up to 31fL in 2D with a million-to-one contrast ratio. Dolby Vision is also proprietary High Dynamic Range format capable of the Rec.2020 wide color gamut. (For more details, read THIS.)

In other words, if you go to a Dolby Cinema auditorium, you're going to experience the best available movie presentation possible. To put them in the parlance of my fellow home theatre geeks, these cinemas are the Pioneer Kuros of our time.

While not every Marvel movie is a must-see classic, the Marvel Cinematic Universe has effectively become the most expensive television series in history, building up an emotional resonance not seen in many other franchises, and one where each episode feels cohesive, yet has its own tonal flourishes and genre conventions. My favorite episodes thus far have been Captain American and Iron Man heavy (and 'Guardians' is just such a joy). Steve Rogers is yin of The Avengers soul, while Tony Stark is the yang. Contrasting personalities, histories, themes, weaknesses, and prerogatives, these two men are the Mason Dixon line, and here they face an important question:

Given the civilian casualties of superhero warfare, should The Avengers be independent vigilantes, or shuld they be overseen by (often corruptible) human governments? 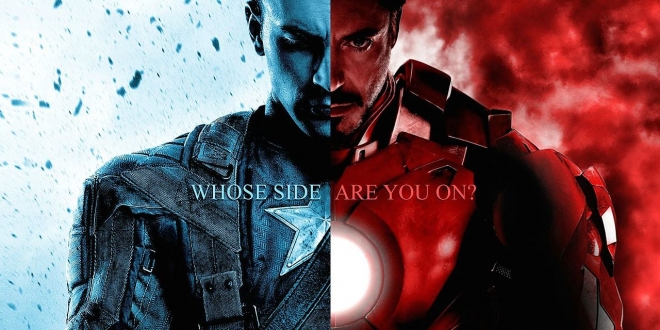 These two men, and their super hero friends, debate the topic, argue their sides, and when all else fails, throw down in a series of fights that become more and more personal as the movie chugs towards its closing credits (fan tip: there are TWO post-credits scenes, so stay til the very end if you enjoy that stuff).

The Cap movies have been improving with every entry and this is more of the same. Terrific action. Strong thematics. Endlessly evolving character struggles. Emotional resonance. Plenty of jokes. This movie gets a big thumbs up from me (you know, if I was legally allowed to give such a rating). I think Marvel Fans, or anyone that found 'Batman v Superman' a slog, will enjoy this one.

If you want a more in-depth review, check out Phil Brown's 4.5-star critique over at The Bonus View.

Visually, 'Captain America: Civil War' matches 'Winter Soldier'. Imagery is sharp and clear, but the color palette as a whole is a little washed out as opposed to the over-saturated colors one might find in something like a Michael Bay movie (note: just mentioning this for visual comparison; I am not endorsing or condoning those color choices). I think this look works for 'Civil War', but it does flatten the image a tad, resulting in a visual design that won't drop as many jaws as 'The Jungle Book'. Admittedly, that flick is so gobsmackingly beautiful, it's an impossible act to follow.

With its million-to-one contrast ratio, Dolby Cinema does deliver deeper black levels, more accurate colors, and some wonderful shadow detail rendering. Be on the lookout for any type of dark environment (say a villian lair location) as well as blacked out costumes on characters like the Winter Soldier and Black Panther. It's uber impressive that Dolby Vision can render so many shades of black and dark grey.

If I was reviewing this film as an Ultra HD Blu-ray or VUDU UHD stream, I'd call it a solid 4.5, if only because the filmmakers made choices that aren't necessarily as eye-popping as they could be.

Much like the film's color palette, the 'Captain America: Civil War' sound mix isn't going to change any lives. But only because -- after mixes like 'Life of Pi', 'The Jungle Book', 'Fury Road', or 'Gravity' -- the bar is set impossibly high. In other words, we have a very good mix that'll likely translate quite well to home cinemas, but isn't a top tier entry.

My favorite Dolby Atmos mixes are world builders -- they evoke aural landscapes, transporting the audience into other worlds. 'Civil War' feels a little front-heavy, is light on environmentals, and any sense of overhead immersion drops away in more action-packed sequences outside of Henry Jackman's musical score. LFE is good, but never guttural.

Sound effect panning and placement evokes a nice sense of geography, especially when the filmmakers take advantage of Dolby Atmos's ability to place sound "objects" in specific auditorium locations. My favorite part of the mix came towards the film's climax, which was an interior location with a nice sense of echo and dimensionality. That said, I'm personally a fan of overhead sound placement and felt this film could have experimented more with the format's capabilities. Blu-ray titles like 'Bram Stoker's Dracula' and 'Game of Thrones: Season 1' did a better job of immersing the audience.

Such is filmmaking, though -- different films have different visions and I'm sure the filmmakers involved here have 'Civil War' sounding exactly they way they want. I look forward to hearing this one again at home. Perhaps Disney will finally be supporting Dolby Atmos in the home as much as it does theatrically. 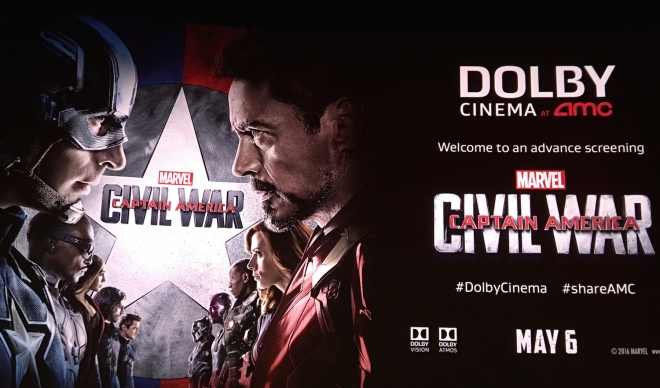 While the technical aspects of 'Captain America Civil War' didn't wow as much as my last Dolby Cinema outing (seriously, 'The Jungle Book' is an eye-gasm of 3D and/or HDR glory), I sure was glad to see it on a big, bright screen with booming sound, all while leaning back in a comfy leather recliner. Another fine Disney / Marvel effort 'Civil War', it deserves to be experienced the best way possible.

To find a Dolby Cinema at AMC location near you, click HERE.

Until next time, hit us up below or in the forums to share what you thought of this movie, and whether or not you've got to experience this movie in Dolby Cinema or any other premium visual or sound formats. Cheers.