Last week, High-Def Digest was invited to attend the 2016 CE Week tradeshow in New York City. The annual mid-year event spotlights the latest tech, gadgets, and consumer electronics from some of the industry's top manufacturers -- and this year's show featured several exciting new products from companies like Epson, Samsung, Pioneer, Onkyo, and more.

From High Dynamic Range projectors and Ultra HD TVs with quantum dots to premium headphones and Dolby Atmos speaker systems, the show floor was packed with tantalizing AV gear and demos for all the eager eyes and ears in attendance. And few were as eager as my own!

So, with my CE thirst now quenched and my senses thoroughly impressed, I've returned with a list of highlights from the event. And in addition to the picks below, be sure to check out our detailed impressions from the Value Electronics 2016 TV Shootout, which was also held at the show. Pitting four premium Ultra HD TVs in a head-to-head competition, the Shootout crowned LG's G6 OLED as the new "King of TV."

But thankfully, the G6 wasn't the only showstopper in attendance… 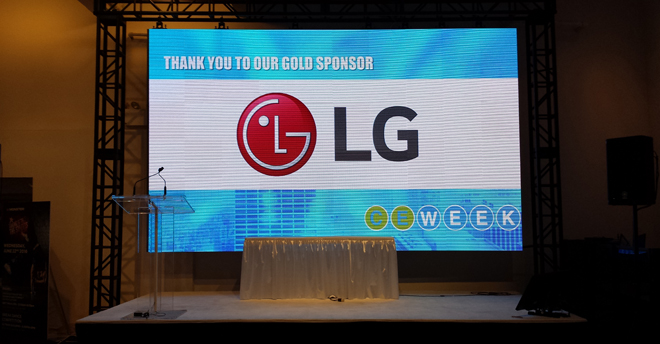 Nestled away in a spacious demo room, Epson had the Pro Cinema 6040UB model set up and ready to go. To highlight the projector's HDR and 4K enhancement tech, the company played back scenes from 'Kingsman: The Secret Service' on Ultra HD Blu-ray, along with stock clips of nature footage and cityscapes from a Redray hard drive. To put it simply, the projector looked spectacular with gorgeous colors, bright contrast, and very strong black level performance. Likewise, detail was astounding, especially on the stock footage reels, revealing tiny intricate textures in leaves, snow, and fur that appeared to offer a rather noticeable step-up from standard 1080p material.

For comparisons sake, Epson also switched back and forth between the Pro Cinema 6040UB and a $15,000 projector from a competing brand. Epson wouldn't confirm exactly which manufacturer it was, but certain clues seemed to point to the unit being one of Sony's high-end models. Both projectors were calibrated by Kevin Miller (owner of ISFTV) to ensure optimal performance, and the Epson model was demonstrably brighter and punchier, while still retaining more realistic contrast and detail.

And while I spent much of the event up and close and personal with some of the industry's best Ultra HD TVs, even with local diming and OLED tech, it's hard to beat the epic scope of a projector. With that said, I did notice one slight yet still noteworthy issue involving visible false contouring in the sky during the parachute sequence from 'Kingsman.' I'm not sure if this was an equipment, calibration, or source issue, but the banding was just apparent enough to warrant a mention (though I didn't see any artifacts from the Redray footage). Regardless, the Pro Cinema 6040UB left quite an impression, making it genuinely hard to pull myself away from the demo room. 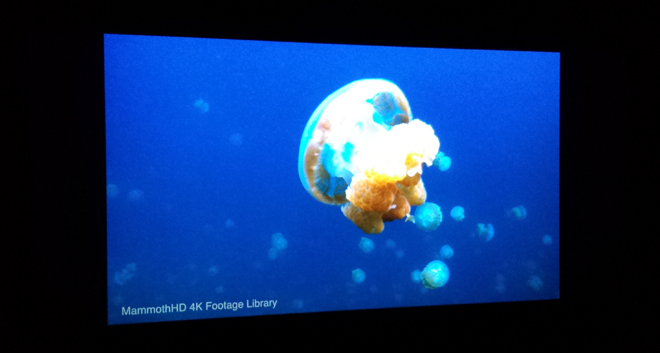 Though LG's flagship OLED may have won the Value Electronics shootout, Samsung's premium 2016 Ultra HD TV is still quite the beauty. With their own booth at CE Week, the company showed off its flagship KS9800 Ultra HD TV along with its UBD-K8500 Ultra HD Blu-ray player. The Premium SUHD TV features a cadmium free 10-bit, curved-screen Quantum Dot Display with 1,000-nits and full-array local dimming. In addition, the display meets the "Ultra HD Premium" specs and includes support for HDR10 and 96% of the DCI-P3 color gamut. Sadly, however, like all of Samsung's new displays, the TV does not include 3D playback.

To highlight the TV, Samsung had two units side-by-side. One played back scenes from 'Deadpool' and 'Eddie the Eagle' on Ultra HD Blu-ray, while the other played back scenes from a demo reel of nature and cityscape footage. All of the videos looked absolutely fantastic, especially scenes featuring a lush green forest and bright red fire, showing off the display's punchy HDR performance and knack for fine details. For more impressions on the KS9800 Ultra HD TV's performance, along with details on how it stacked up against competing 2016 Ultra HD TVs, check out our write-up from the Value Electronics TV Shootout. 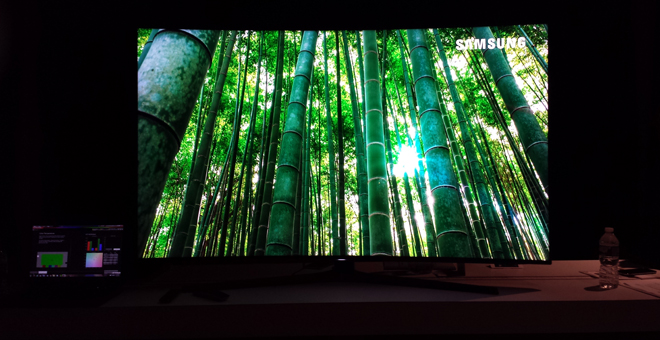 In addition to the two sets playing demo material, a third unit was also on hand and happened to be demonstrating HDR calibration with new CalMAN 2016 software when I visited the booth. The calibration tools were released for the first time during the show, finally giving new Ultra HD TVs owners the option to fine tune their sets to meet HDR and wide color gamut standards.

And outside of Samsung's booth, the KS9800 Ultra HD TV also made one more appearance at the show -- this time at the Nanosys booth. Nanosys is the company that provides the display with quantum dots, a technology that uses nano-crystals that emit different colors when exposed to light depending on their size. When the dots are placed on a film over an LCD backlight with blue LEDs, they allow the panel to produce higher brightness levels with more realistic colors. This lets TVs with quantum dots support expanded color gamuts beyond the traditional Rec. 709 color space.

For comparisons sake, Nanosys had the Samsung TV sitting side-by-side with the LG 65-inch OLED65G6P OLED (Samsung left, LG right). And though the G6 does offer numerous benefits of its own, in the bright room setting of the show, the OLED looked quite dim and washed out compared to the KS9800 -- revealing the unique strengths of LCDs with quantum dots.

While Ultra HD TVs with HDR and wide color gamuts are mightily impressive, what's left for customers who are just looking to get a bit more bang out of their existing displays? Well, that's where DarbeeVision comes in. The company is known for their standalone digital image enhancers, and they had their latest device, the DVP-5000S ($249), on hand at CE Week.

The DVP-5000S is a compact, plug and play image enhancer that works with any HD HDMI display, TV, or projector. Customers simply need to connect the device between any product's HDMI output and their TV's HDMI input. Once connected, users can select from three different viewing modes: High-Def for high quality sources like Blu-ray discs, Gaming for computer generated images, and Full Pop for low res and low quality content. The DVP-5000S uses DARBEE Visual Presence™ V 2.0 Processing at the pixel level to embed 3D depth cues in real time, offering new detail and enhanced depth without altering color, contrast, sharpening, or resolution. Though the device cannot pass native 4K Ultra HD content, it does support HDMI 1.4 with 3D playback. Likewise, the company is working on 4K implementation for future models. 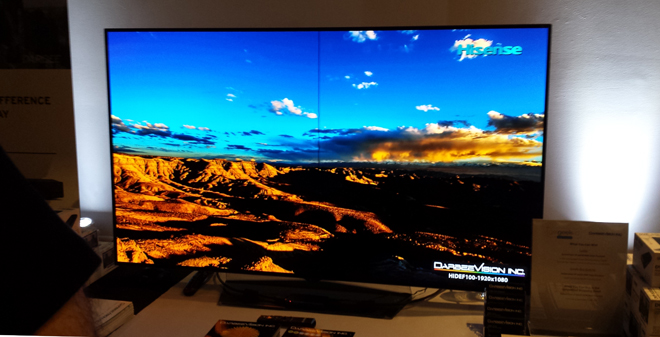 To be honest, I'm pretty skeptical of "enhancement" products like this and usually prefer for my video signals to be as "pure" as possible. With that said, the demo looked rather nice, offering a scrolling before-and-after image on a Hisense display. With the DVP-5000S processing activated, the image did indeed look more detailed and I couldn't see any egregious artifacts. Of course, I'd need more time with the unit to make a full judgement, but it might be a worthwhile product for those looking to milk a bit more quality out of 1080p images. 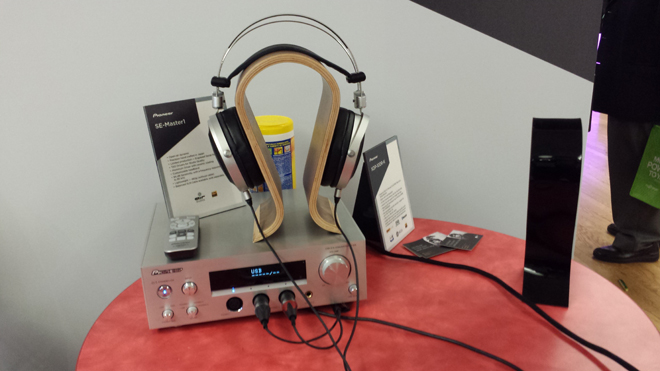 Of the bunch, I took some time to listen to the XDP-100R Digital Audio Player through the SE-MASTER1 headphones playing a Dire Straits track. The song was available in FLAC and MQA formats and both sounded fantastic with full, lush fidelity. With that said, I can't say that my ears were blown away enough to warm up to the headphones' $2,500 price tag, but since a noisy tradeshow isn't really the best place to demo audio gear, more one-on-one time would likely reveal many nuances and performance benefits.

In addition to the previously detailed gear on hand, Pioneer also debuted their new line of Micro Systems. Designed to serve as simple and compact stereo audio solutions perfect for apartments and college dorms, the Micro Systems include models with separate speakers and integrated speakers, along with CD players and wireless Bluetooth playback. Exact pricing and availability have not been announced yet, but Pioneer expects there to be options under $600.

Pioneer's sister brand, Onkyo, was also in attendance at the show with their DP-X1 Digital Audio Player ($799). The device is based on the Android OS and offers support for several High Res Audio formats, including up to DSD 11.2MHz, 384kHz/24bit FLAC/WAV audio files. Likewise, the player now includes support the MQA format as well. MQA is an end to end audio tech that provides authenticated master quality audio in a file that's small enough to stream or download. Under the hood, the Audio circuit design uses ESS technology's SABRE DAC ES9018K2M and SABRE 9601K amp in a dual setup with a 2.5mm 4 pole jack for full balance output with support for normal BTL balance and Active Control GND drive. Finally, the player also provides the option to expand its storage to up to 432GB along with Google Play access. 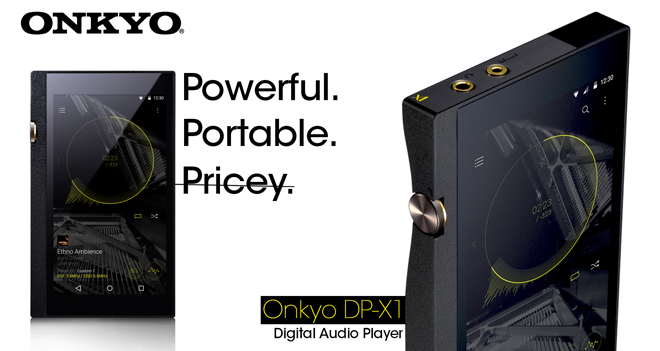 For demo purposes, I listened to Metallica's "Enter Sandman" in FLAC and MQA encoded formats, and both offered a deep, expansive audio experience. Though, once again, I'd need some more quality time with the player (away from a crowded show floor) to really offer full impressions.

Joining the many already established brands at CE Week, was newcomer Kiss AV, a start-up hoping to crowdfund its new K.I.S.S. AV X4 2.1 speaker system through Kickstarter. Meant to serve as a better sounding solution to integrated TV speakers and dedicated soundbars, the K.I.S.S. AV X4 audio system features two speakers and a wireless subwoofer. Designed to be placed on a bookshelf or stands, or mounted to any wall surface, the thin speakers weigh less than two pounds each and measure just three inches thick (light enough to mount with Command Strips). 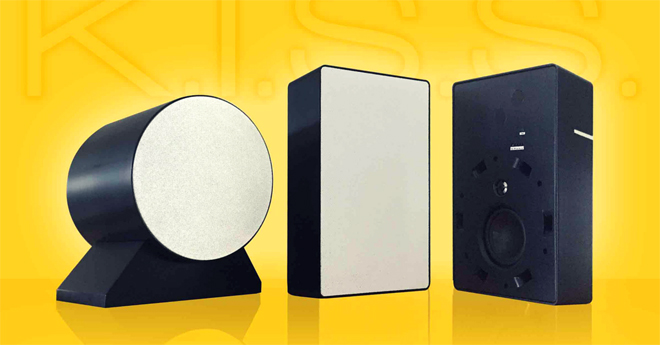 While Sonic Vortex® Technology might sound like usual marketing fluff, after hearing the speakers in person, the tech does seem to have some merit. Despite the demo being situated amidst the large, crowded, and rather noisy tradeshow atmosphere, the K.I.S.S. AV X4 audio system produced surprisingly rich and genuinely room-filling sound at about 3-quarters of its max volume output. I'd need a quieter environment to really evaluate the nuances of the system's sonics, but what I heard left me wanting to hear more. The K.I.S.S. AV X4 speaker system Kickstarter campaign is now live. Early bird prices for the left and right speaker package start at $200, and prices for the 2.1 system with wireless subwoofer start at $399.

CE Week 2016 was filled with many impressive audio and video products, running the full gamut from budget gear to premium high-end devices. And beyond traditional AV items, the show also offered a varied assortment of tech gadgets, including 3D printers, drones, and even a car... because what tech show could be complete without a car? For now, though, what do you think of the products highlighted here? Will you be investing in an HDR projector or a digital music player? Let us know your thoughts in the forums! 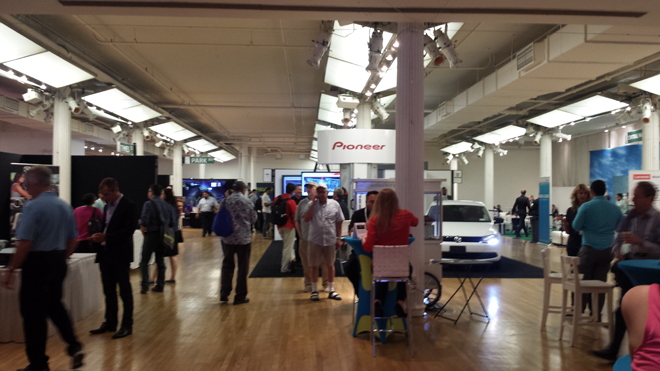