The new wireless entertainment framework aims to unify Wi-Fi media devices and content throughout the home.

Blackfire Research Corp has announced the launch of its latest smart home entertainment solution. Dubbed Blackfire Red, the new tech is a Real-time Entertainment Distribution framework designed for use with a broad range of AV products, allowing customers to enjoy all of their digital content wirelessly, synchronously, and seamlessly throughout the home, including surround sound and 4K video on multiple supported devices over standard Wi-Fi.

"The Smart Home industry is due for a shake-up," said Adam Wright, Senior Research Analyst, Consumer IoT, IDC. "While the initial IoT concept has evolved into the Connected Home, we still see that Home Entertainment is lagging behind due to unreliable connectivity and lack of interoperability, among other issues. The Smart Home industry has been in need of a solution that has the ability to link all of these excellent, yet disparate, smart devices. Reliable, real-time connectivity between devices and the ability to work together seamlessly is essential for the Smart Home ecosystem to move past this innovation plateau."

And to help show off this new framework, Blackfire invited High-Def Digest to a special in-person demonstration of the tech. Held at the London Hotel in NYC, the demo featured a variety of Blackfire Red-enabled media devices, offering an impressive taste of what consumers can expect from a full Blackfire Red Smart Home Entertainment ecosystem.

While there are currently many different wireless solutions for a variety of AV devices, including several multi-room audio systems like Sonos, DTS Play-Fi, Yamaha MusicCast, and Denon HEOS, the Blackfire Red framework strives to give manufacturers and users a more unified Wi-Fi entertainment experience -- offering wireless cross-brand support for audio and video formats.

Instead of multiple frameworks that create different "islands" of Wi-Fi enabled products throughout a home which can only speak to certain brands and types of devices and only transmit certain audio or video formats, the Blackfire Red platform aims to enable an ecosystem where compatible smart TVs, mobile products, media players, computers, receivers, and speakers from different companies can all freely send and receive audio and video from one another, including 4K and multi-channel sound.

In other words, the tech has the potential to create a scenario where a customer could send video from their living room Ultra HD Blu-ray player to their bedroom TV, or 5.1 sound from a streaming dongle to a wireless multi-speaker system -- all over the same Wi-Fi connection regardless of device type or brand. 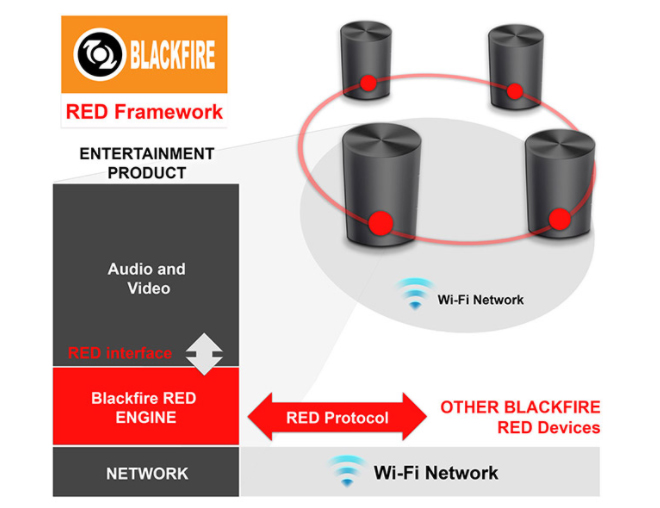 To accomplish this, the technology uses an entertainment-centric infrastructure software framework specifically developed to overcome common limitations of Wi-Fi when used for media applications, creating a wireless system that focuses on reliability and precision in an effort to prevent synchronization issues.

Per the company, the Blackfire Red framework is made up of:

●     A Communication Protocol, that allows Blackfire RED enabled products to talk to each other, over a standard network stack. This was designed and tailored specifically to overcome the limitations of traditional Wi-Fi by working around the effects of interference and ensuring a reliable, high-speed connection.

●     A Programming Interface that allows easy real time distribution and handling of entertainment content from and to the products. 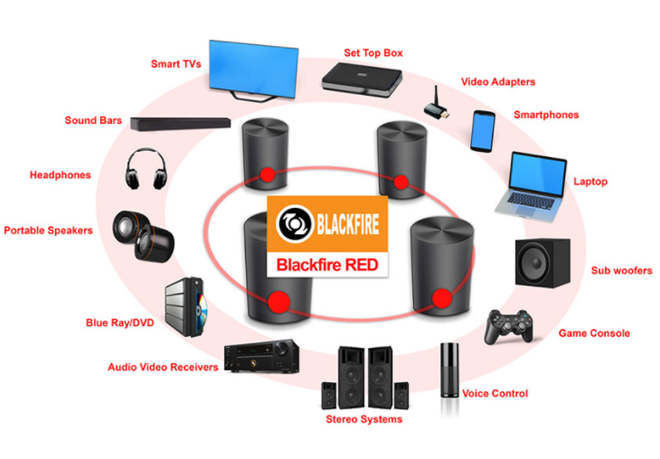 And here's a rundown of key feature of the tech:

●     Native integration into Smart TVs, enabling the TV itself to decode and send multi-channel audio to wireless speakers;

●     Wireless 4K video for transmitting audio and video from a Smart Set Top Box simultaneously to multiple TVs and speakers throughout the home;

●     Easy integration into all smart devices.

For the first demo, the company demonstrated the Blackfire Red platform's multi-room audio streaming capabilities by playing the same audio track across multiple devices. For testing purposes, the music was streamed from a smartphone and first sent to an Onkyo wireless speaker.

Then, the track was seamlessly expanded to an additional Pioneer wireless speaker in the same room without skipping a beat. Continuing the trend, the song was once again expanded to another audio device, this time an Onkyo receiver connected to a wired pair of stereo speakers in an adjacent room. Finally, the track was added to a portable Harman Kardon speaker in a third room.

Throughout it all, the music played back simultaneously on all of the different devices without any discernible sync issues or technical hiccups. 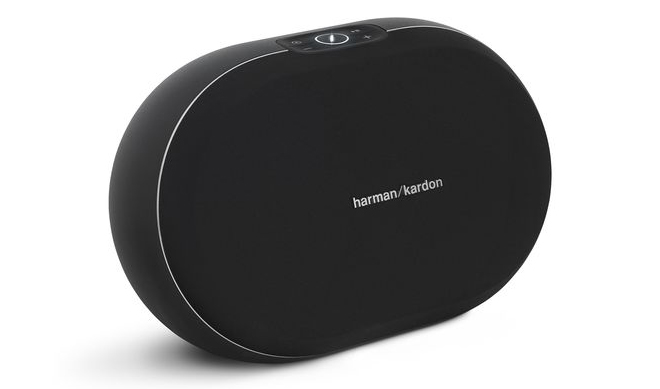 For the next demo, we shifted to a Smart TV as our source to test the tech's synchronization capabilities even further by streaming wireless audio from a video clip. As a scene from Alice Through the Looking Glass played on the TV from an Xbox One connected via HDMI, the Blackfire Red framework integrated into the TV's motherboard sent the file's Dolby Digital 5.1 audio track to a fully wireless 5.1 Harman Kardon Omni 20 Plus speaker system. Though it was only a brief clip, each distinct channel of audio played through its corresponding speaker perfectly in sync with the video on screen and with each other.

To help further emphasize the framework's phase and sync accuracy, a test pattern screen was brought up on the TV as well. This demo featured an audio cue coinciding with shapes clapping together on the TV, and the clicking sound repeatedly played through the wireless speakers without any delays with the visuals on the display.

Moving on to content that's a little more dynamic in nature, the next demonstration featured live gameplay of Titanfall on Xbox One. Once again, the 5.1 audio was wirelessly transmitted to the Harmon Kardon speakers from the smart TV. As bullets blasted and explosions shook the room, the video on screen and audio from the wireless speakers maintained sync without any notable lag.

But while synchronized wireless 5.1 audio is impressive, what about 4K video? To test this feature of the Blackfire Red framework, a 4K clip featuring adorable puppies was streamed wirelessly from a smartphone to a media box (sitting in for a smaller dongle) connected to an Ultra HD monitor. At the same time, 6-channel audio from the clip was wirelessly played through the Harman Kardon speakers. Both the video and audio played without a hitch, revealing no notable sync or compression issues.

Though more one on one time is needed with multiple Blackfire Red enabled products to form a full judgement, my brief time with the tech left me very impressed. I've used other wireless frameworks with various product lines before, but the full breadth of potential device, brand, and format support covered here under a single platform is especially enticing.

Certain format and device linking limitations could be employed by certain manufacturers, but the underlying technology behind the Blackfire Red framework really does open up the possibility for a fully unified, multi-room smart entertainment ecosystem -- where all AV devices in a home are free to send and receive all forms of content from one another wirelessly. 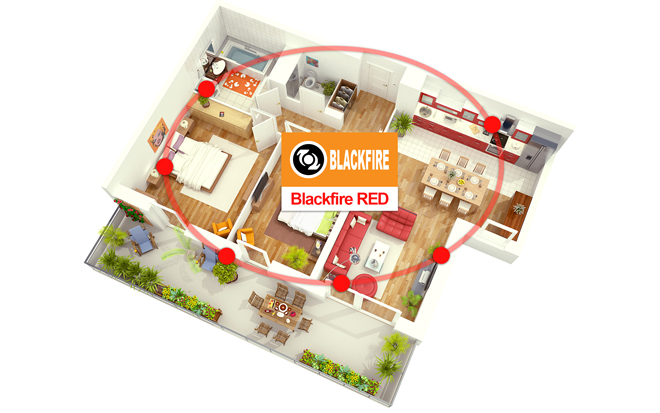 Audio brands like Harman Kardon, Onkyo, Pioneer, and Integra are all currently shipping products that use Blackfire Red technology. Likewise, media players, smart TVs, and other home entertainment products with Blackfire Red support are all in the works -- though specific release dates and manufacturers have not been announced yet.