Woah, sorry about that. I had a traumatic flashback to 90s audio tech…

But thankfully, we've come a long way since those cable cluttered days, and audio technology has evolved quite a bit over the years. With several wireless multi-room options now permeating the market, consumers have lots of different choices for hassle free streaming music and entertainment across their entire home.

And quickly making its way toward the top of these choices is none other than DTS Play-Fi.

An advanced cross-platform wireless audio technology that lets users stream and enjoy music through their Wi-Fi connections, DTS Play-Fi has been steadily expanding to more and more products from a wide range of manufacturers. Likewise, the tech has also been continually updating its features and supported services, mixing high quality audio performance with extensive industry integration. So, with all that in mind, how could we say no to a chance to attend a full demonstration? The answer? Well, we couldn't, of course!

Earlier this month, High-Def Digest was invited to check out some of the latest DTS Play-Fi enabled audio products, offering a hands-on peek at some of the technology's newest features. Here's a rundown of all the demos we heard along with full details on all the new audio gear!

The Play-Fi whole-home wireless music ecosystem gives both customers and manufacturers a great level of freedom when it comes to integrating and using Wi-Fi streaming for music. With Play-Fi audio products, users can wirelessly play music from smartphones, tablets, laptops or desktop PCs over an existing home Wi-Fi network to multiple Play-Fi speakers throughout the home. Likewise, Play-Fi is not brand exclusive. This means that Play-Fi audio products from different manufacturers can actually work together seamlessly.

Consumers can use Play-Fi apps for Android, iOS, and Kindle Fire to bring "over 20,000 radio stations, podcasts, local music, media servers, and select cloud-based music services" to their Play-Fi enabled speaker systems. Lag-free music can then be streamed to multiple Play-Fi speakers connected in a single zone throughout a house. Similarly, customers can also opt to create multiple zones with their speakers to stream different music to different rooms in their homes. In total, the platform supports up to four different zones from one device with up to eight speakers in each zone. This means that up to eight speakers in a single room can be playing the same song at the same time from the same device. 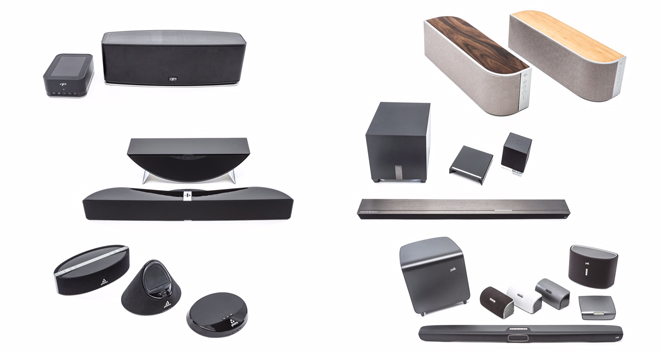 The technology supports playback at up to CD quality audio (16bit/48kHz). In addition, Play-Fi is also capable of streaming up to 24bit/192kHz audio without file format compression. Instead, files of that quality are simply downsampled to CD quality without a change in file format. And unlike other proprietary wireless streaming technologies, Play-Fi does not require any special bridges or routers, allowing customers to simply use their existing Wi-Fi setup.

DTS recently expanded the platform to a total of 30 different products, including new gear from MartinLogan, Polk, Wren, and more. In addition, software updates to the Play-Fi system include new support for the TIDAL music streaming service; Spotify Connect multi-room support; Rdio and Rhapsody iOS support; Audio/Video Synchronization with Windows PCs; and an updated Play-Fi app.

To show off the new Play-Fi lineup and features, DTS invited us to the London Hotel in New York City. There, in the company's swanky suite, we were treated to several different speaker setups designed to simulate common multi-room configurations for consumers. Though it was hard to actually judge any of the speakers on an individual performance level, the purpose of the demo was more geared toward demonstrating how the DTS Play-Fi ecosystem works as a whole in a real-world environment... and on that front, it was very eye (and ear) opening. 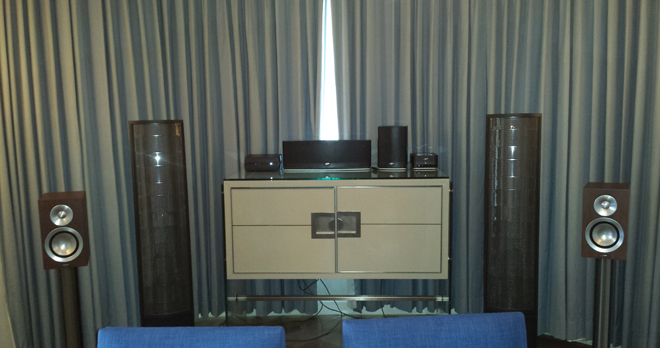 The first setup was dubbed the "dining room" and featured several mouthwatering speakers and audio components lined up behind -- yes, you guessed it -- a dining room table. Products included a pair of floor-standing MartinLogan electrostatic speakers, the Paradigm PW600, Paradigm PW800, Paradigm PWAMP, and a pair of Paradigm Prestige 15B bookshelf speakers -- all connected to the same wireless zone.

For demo purposes, DTS streamed several high quality TIDAL music tracks, including Mark Ronson & Bruno Mars' "Uptown Funk," to the speakers off of a tablet straight through the Play-Fi app. The songs immediately started playing through all of the speakers with zero lag, and the DTS rep was able to seamlessly switch between speakers, adjust the volume on individual speakers, and add/remove speakers from the zone on the fly with the press of a button -- all without ever skipping a beat. Literally.

As I said before, it was hard to truly gauge the audio quality of each model during the limited demo, but all of the speakers offered nice performance. The floor-standing electrostatics had the cleanest presence, but the smaller Paradigm models did a solid job of filling the room with sound as well -- especially considering their size. 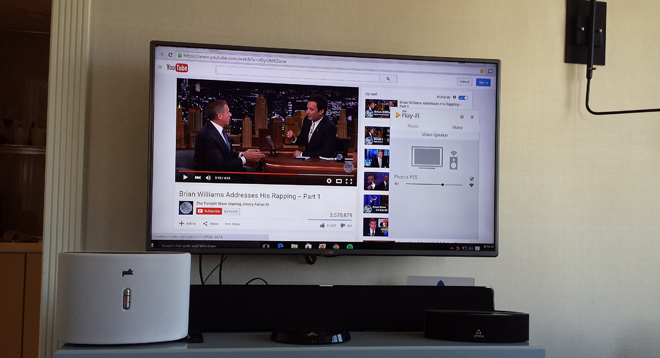 Next up, was the "living room" demo, and, as one might expect, this area featured a cozy sofa and a TV. New speakers in this zone included the Polk Omni S6 and the MartinLogan Crescendo X. The main purpose of this demo was to highlight Play-Fi's new Windows system level software and PC audio/video synchronization feature -- which makes Play-Fi the only multi-room streaming platform to currently offer lip-sync accurate synchronization with a video source

To this end, the TV was connected to a PC and a browser was brought up with a YouTube clip from 'The Tonight Show' all ready to play. As promised, once Jimmy Fallon started to yap on screen, the audio streamed perfectly in sync with the video to the connected Play-Fi speakers. There was one fleeting stutter, but this was probably a YouTube issue and not related to the audio streaming itself. Likewise, though surround sound is not supported at this time, this video sync feature could allow HTPC users to play Blu-ray disc audio on Play-Fi speakers and soundbars while they watch the video on their displays. The A/V sync feature is now available for existing and new purchasers of the premium Play-Fi HD Driver ($14.95).

In addition to the new audio/video synchronization, the demo spotlighted the benefits of Play-Fi's Windows System Level software integration (with Windows 10 support), allowing users to stream virtually any audio file or service from their computer. Customers can even choose to isolate specific programs on their PCs, enabling them to only hear the audio from desired services on the connected speakers while the rest of their active computer apps remain silent. In practice, this feature was quite handy, allowing the DTS rep to isolate only the audio they wanted to hear. Likewise, the speakers used in this zone all offered solid performance as well, though special note must go to the Crescendo X for its unique and elegant design.

Finally, our last demo was "the study," offering another batch of impressive wireless speaker options in all shapes and sizes -- but this time surrounded by leather bound books! The lineup here featured more compact Play-Fi gear like the Wren V3US and the McIntosh MB50 Media Streamer. Once again, we listened to a few more TIDAL tracks streaming from a tablet (this time we went with some Janet Jackson), and once again wireless playback and integration between the speakers was seamless and smooth. The DTS rep even switched back to the dining room zone on the fly and was able to add speakers from that room into the study zone of speakers instantly -- demonstrating just how much flexibility and ease of use the Play-Fi system offers. 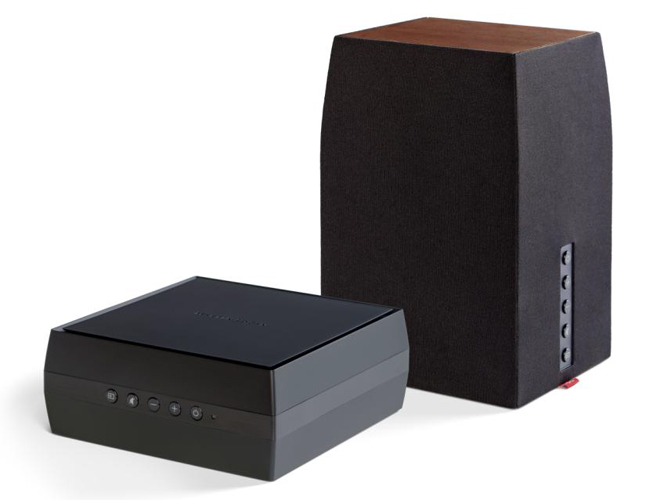 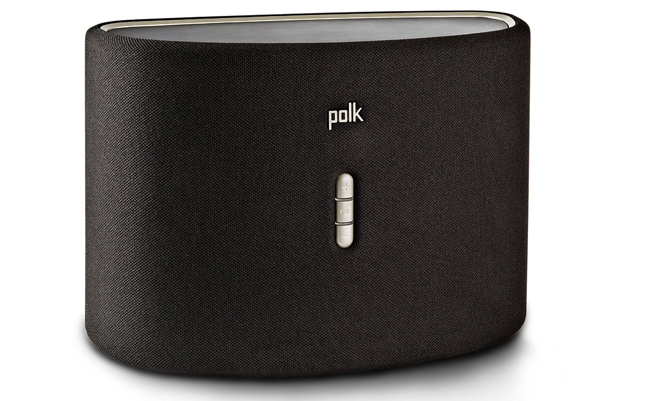 With its growing ecosystem of products, features, and supported services, DTS Play-Fi is gradually cementing itself as one of the most expansive wireless multi-room audio technologies on the market. There's still room for improvement and I'm sure more time with the system will likely reveal more quirks and hiccups, but after witnessing the platform first hand, I've come away impressed by the tech's seamless cross-manufacturer integration, high quality audio streaming, and apparent ease of use.

We're hoping to get some more dedicated one-on-one time with several of these new DTS Play-Fi enabled products, so stay tuned to High-Def Digest for more wireless audio impressions and reviews! For now, though, what do you think about DTS Play-Fi? Does the platform meet your wireless music needs? Will you be checking out any of these speakers or audio components? Or are you still content will all those damn wires?! Let us know your thoughts in the forums!