UPDATE 8/20/18: Apple has continued to improve tvOS 12 Beta, giving us our first look at Dolby Atmos in iTunes, as well as fixing stability issues. We've updated this article throughout to reflect these updates.

Dolby Atmos is finally available on the Apple TV 4K and it's everything you want it to be... or will be once Apple and their partners fix a few beta bugs.

When HDD Team Member, Bryan Kluger, reviewed the Apple TV 4K last September, he was impressed by its power, performance, and convenience. But there were frame-rate issues, most apps lacked native 4K + HDR support and, of course, there was no word on whether the device would ever include Dolby Atmos, an ultra-immersive hemispherical surround sound format we've enjoyed on Blu-rays, 4K Ultra HD Blu-rays, and other 4K streaming devices like the Roku Ultra.

The challenge, of course, is that Apple prefers closed ecosystems. For example, the Apple TV 4K debuted without the ability to match dynamic range or frame rate to the content -- instead favoring only your TV's best HDR and frame-rate capabilities -- because Apple wanted the overall experience to be clean and seamless. Cinephiles and home theater enthusiasts spoke up -- native 24fps movies look bad at 60fps -- and Apple brought out a patch.

For similar reasons, Apple TVs haven't offered traditional audio bit-streaming -- ie, passing through audio mixes to your AV Receiver or sound bar for decoding -- since Apple preferred the seamlessness of internal decoding OR decoding-then-re-encoding. But Dolby Atmos soundtracks can't be internally decoded. Dolby Atmos requires an AV Receiver because the Atmos decoder needs to know how many speakers and subwoofers you have and how they're arranged in your room.

tvOS 12 adds Dolby Atmos capability to the Apple TV 4K by internally decoding Dolby Digital and Dolby Digital Plus mixes and bit-streaming only Dolby Atmos mixes. While the full version won't launch until September, the public beta is available now and you can try it, along with other public betas, out yourself by enrolling any of your tvOS, iOS, or macOS devices, if you so choose. Please be aware, though, that it's a lot of fun to test things out early, but you may lose some app compatibility and functionality. 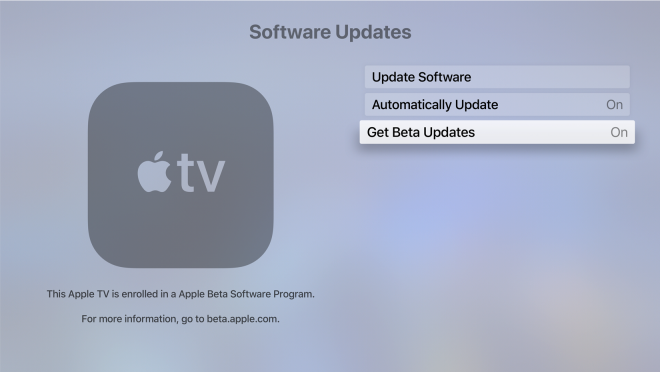 How To Update Your Apple TV 4K's tvOS

Once you've enrolled your Apple TV 4K in the public beta program, it's as simple as going to Settings >>>> System >>>> Software Updates >>>> set Get Beta Updates to ON >>>> Update Software. If you're already enrolled and have Automatically Update turned ON, your current firmware version is listed both on the Software Update page as well as under General >>>> About. If you see tvOS 12.0, you're ready to go. 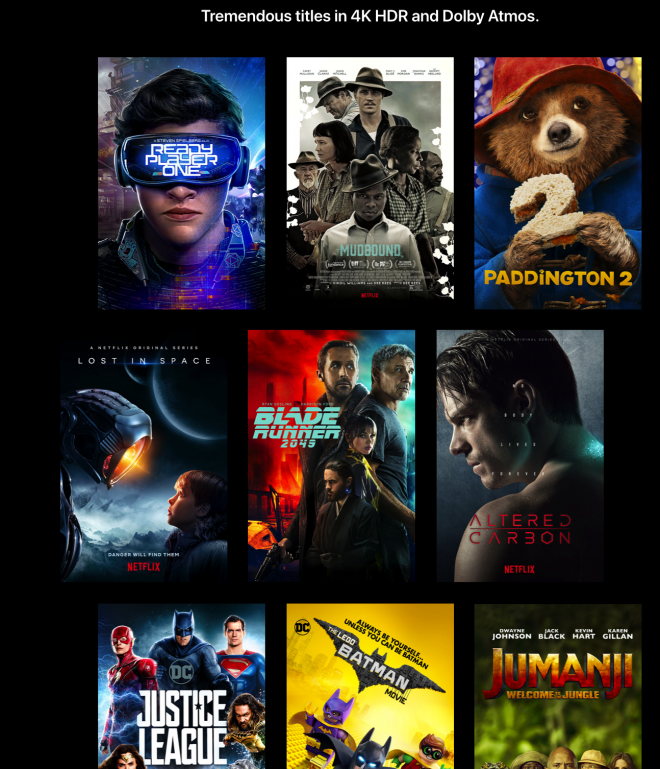 The Apple TV 4K product page lists nine Dolby Atmos titles as coming soon -- iTunes movies Ready Player One, Paddington 2, Blade Runner 2049, Justice League, The LEGO Batman Movie, and Jumanji: Welcome to the Jungle, as well as Netflix Originals Mudbound, Lost in Space, and Altered Carbon. Seven movies and two TV series may not seem like a glut of Atmos soundtracks, but I suspect there will be more and what's most exciting is that Netflix is expanding its Atmos support beyond Xbox, Windows 10, and LG OLEDs.

Unfortunately, at this time in the beta test, Netflix and iTunes aren't isn't offering Atmos. For its part, Netflix still says 5.1 on all of its titles that should be in Atmos. And, while Blade Runner 2049 listed "Dolby Digital Atmos" as its audio format in iTunes, it's still internally decoded 5.1 and sent to my AVR as PCM. (small update: the image pictured to the right changed after I captured it, and it now says 5.1 under Languages.)

8/20/18 UPDATE: While Netflix remains Atmos-free on the Apple TV 4K, over a dozen Dolby Atmos movies are now listed in iTunes. Most fascinating, Apple differs from Vudu, offering Dolby Atmos along with HD streams (I confirmed this via Gravity and The Greatest Showman) as well as with 4K HDR and 4K Dolby Vision titles (Mad Max Fury Road, etc.). In other words, Apple appears to be launching Dolby Atmos as a resolution-agnostic feature, so even if you don't have a 4K TV or when a movie's not available in 4K, you can enjoy hemispherical surround sound. (You will need an Apple TV 4K, though.) The only remaining bug is that some titles are listed as having Atmos when they are still playing in 5.1 or 7.1. In terms of sound quality, my thoughts with the iTunes Dolby Atmos mixes match my thoughts on Vudu, discussed below. Overall, it's very good for lossy DD+ audio, but disc-based lossless Dolby Atmos retains an edge in terms of dynamic range and fidelity.

I dove into my growing UHD collection, bouncing from A Quiet Place to Pacific Rim to Wonder Woman to Kong: Skull Island to Fury Road to The Last Jedi to Black Panther before, finally, settling in on an extended demo of Blade Runner 2049. I'm happy to not only report that Dolby Atmos appeared on my AV Receiver's front display for every title I checked, but also that everything sounded as it should. Blending world-building immersion, aggressive sound effects panning, and Hans Zimmers LFE-heavy score elements, the Blade Runner 2049 mix is dynamic and authoritative. And if you don't do an a-to-b demo comparing streaming Atmos (which uses a lossy Dolby Digital Plus base) vs disc Atmos (which uses the lossless Dolby TrueHD), you might not know you're listening to lossy audio. I have a pair of Klipsch RF-7 III speakers, which cost $1,800 each, in for review right now. They're not the best Klipsch speakers I've ever heard (they spoiled us at CES 2018), but the RF-7 IIIs are quick to highlight flat, lossy audio with poor compression. And, whenever I demo Dolby Atmos via Vudu -- be it a TV, Roku Ultra, or now the Apple TV 4K -- it sounds almost lossless.

8/20/18 UPDATE: Having used tvOS 12 Beta for a while now, I'm happy to report the instances of app freezing and crashing has all-but-disappeared. My only remaining critique is simply wondering when Netflix and Amazon will support Dolby Atmos too.

While the Dolby Atmos tracks I tested sounded good, the overall beta experience is extremely buggy.

My Vudu app crashed multiple times and, if I exited a movie without pausing it first, the movie's audio would keep playing over various menu screens or even over the next movie selected. Then it froze. And crashed. Restarting the Apple TV 4K seemed to help. On another occasion, I paused the movie and went to get a drink and, when I came back, I couldn't un-pause it. Then it froze. And crashed.

My advice, if you do this beta? Make sure you always pause a movie before going back to the Home screen or the Vudu menu, but not too long. I also wasn't in love with the video quality, noticing some banding I don't typically see when watching my Roku Ultra. I'm not sure what caused this, but we'll make sure to continue testing and follow up on everything once the beta turns into the public version.

Lastly, I revisited the Amazon Prime app (fka Amazon Instant Video), which gives Prime members access to their digital libraries as well as movies and TV shows included with the service. You can also rent movies from Amazon, but you have to set up the rental via the web rather than in the app. Amazon Prime initially debuted on the Apple TV 4K last December, but didn't offer HDR. I'm happy to report most Prime Originals (and some third-party movies) are available in 4K + HDR10 and they look great, but the audio is a disaster. Forget Dolby Atmos, the app appears limited to stereo sound and there are some serious sync issues and audio delays that make watching Amazon Prime impossible at times. 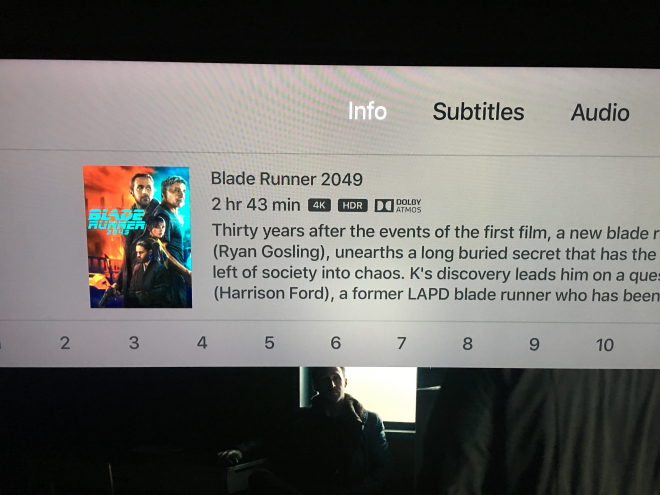 How To Find Dolby Atmos Content on an Apple TV 4K

When tvOS 12 launches to the public, iTunes, Netflix, Vudu (and possibly Amazon sometime this year) will offer Dolby Atmos movies and TV shows. To check the native format(s) of anything you're already watching on the Apple TV 4K, simply swipe downwards on the Apple TV remote to see an Info menu where you'll see resolution, HDR, and audio information. Also, here's how you can figure out whether or not a title is available in Dolby Atmos while browsing:

In iTunes aka Movies, select a specific movie and you'll see Dolby Atmos listed next to the video resolution and HDR status. Again, Dolby Atmos is working with HD, 4K HDR, and 4K Dolby Vision titles.

In Netflix, select a specific movie and Netflix list both the video and audio formats next to the movie's poster & description. For video, you'll see HD (1080p), Ultra HD (4K in standard dynamic range), HDR (HDR10), or a Dolby Vision logo. For Audio, you'll see nothing (stereo), 5.1, or a Dolby Atmos logo.

In Vudu, you first need to make sure you set the Playback Quality to 4K UHD under Settings. If you don't, the app will default to HDX, which is limited to 5.1 or 7.1 audio. Then, select a specific movie and scroll down to More Info where you'll typically see Dolby Atmos listed next to a film's HDR formats.

Generally speaking, if a movie or TV show isn't available in Ultra HD aka 4K, it likely won't have Dolby Atmos audio.

Should I Get tvOS 12 Public Beta?

8/20/18 UPDATE: Yes. Dolby Atmos may not be fully supported everywhere, but I'd say tvOS 12 Beta is very close to its public release. I've found the whole thing stable and the audio performance upgrades a joy. Definitely check it out.

I wouldn't recommend it just yet unless you have a lot of Vudu UHD movies and are an Atmos diehard. As experienced, tvOS 12 is extremely buggy at the moment, with major app-crashing and audio sync issues. And, with iTunes and Netflix still waiting in the wings, there's only one app with Dolby Atmos to demo. If those issues change or you're curious, you should definitely check it out.

While tvOS 12 Beta was the buggiest tvOS beta I had ever experienced, it's a lot more stable, and Dolby Atmos is available on both iTunes & Vudu. There are some inaccuracies in the iTunes menu, but I'm willing to give Apple the benefit of the doubt that they'll have it cleaned up soon.

Without all the bugs of the early Beta, and even with a few typos and missing features, the Apple TV 4K has already become the best 4K streaming device and ecosystem available to buy in 2018.

Compared to the Roku Ultra and most Smart TV OS platforms, the Apple TV 4K is simply faster and cleaner than all of its competitors while, of course, offering what's currently the largest selection of Dolby Vision and HDR content. Add in Dolby Atmos, and it's everything a 4K streaming enthusiast could need... unless you're heavily invested in Google or Microsoft streaming and/or don't have access to fast Broadband. But, if you're an iTunes, Netflix, Vudu, and/or Amazon customer, it's the current best of the best. Or will be soon.