The Japanese filmmaker's trio of crime thrillers is headed for Blu-ray in January.

After several years spent working almost exclusively in the direct-to-video world of "V-cinema" in Japan, Takashi Miike announced himself as a world-class filmmaking talent with this trio of thematically-connected, character-centric crime stories about violence, the underworld of Japanese society, families both real and surrogate, and the possibly hopeless task of finding one's place in the world. His first films made specifically for theatrical release, and his first for a major studio, the "Black Society Trilogy" was the beginning of Miike's mature career as a filmmaker and they remain among the prolific director's finest works.

Set in the bustling Kabuki-cho nightlife neighborhood of Tokyo, Shinjuku Triad Society follows a mixed-race cop (Kippei Shiina, Outrage) struggling with private issues while hunting a psychotic criminal (Tomorowo Taguchi, Tetsuo the Iron Man) who traffics in children's organs. Rainy Dog, shot entirely in Taiwan, is about an exiled yakuza (Dead or Alive's Show Aikawa) who finds himself saddled with a son he never knew he had and a price on his head after the Chinese gang he works for decides to turn on him. Ley Lines moves from the countryside to the city and back, as three Japanese youths of Chinese descent (including The Raid 2's Kazuki Kitamura) seek their fortune in Tokyo, only to run afoul of a violent gang boss (Naoto Takenaka, The Happiness of the Katakuris).

Three of the most dramatically moving films created by the director, the "Black Society Trilogy" offers clear proof that Miike's frequent pigeonholing as a specialist in bloody spectacle is only one aspect of his filmmaking career, and taken as a whole, the films are among the finest works ever to deal with the way violence and brutality can unexpectedly destroy even the most innocent of lives.

The release will feature high-definition digital transfers of all three films, original uncompressed stereo audio, optional English subtitles for all three films, and supplements will include:

You can find the latest specs for 'Takashi Miike's Black Society Trilogy' linked from our Blu-ray Release Schedule, where it is indexed under January 17. 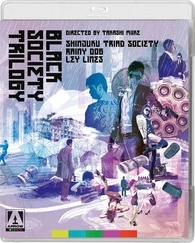