Danny Perez's horror film is coming to Blu-ray in February.

In an early announcement to retailers, Shout Factory is preparing 'Antibirth' for Blu-ray on February 7.

Hard-drinking, pill-popping, bong-ripping Lou (Natasha Lyonne, Orange In The New Black) and her best friend Sadie (Chloë Sevigny, #Horror, Love & Friendship) spend their days adrift in a druggy haze. But one wild night out becomes a bad trip that never ends when Lou wakes up with symptoms of an unexplained, highly abnormal pregnancy. Who—or what—is growing inside her? As her due date approaches with alarming swiftness, the fear, paranoia, and conspiracy theories begin to pile up. Spiked with blasts of hallucinatory color, surreal shocks, and subversive comedy, the audacious feature debut from Danny Perez is a no-holds-barred descent into delirium. This "Weird, messy and oddly fascinating" (Maitland McDonagh, Film Journal International) film also stars Meg Tilly (Psycho II) and Mark Webber (Green Room).

You can find the latest specs for 'Antibirth' linked from our Blu-ray Release Schedule, where it's indexed under February 7. 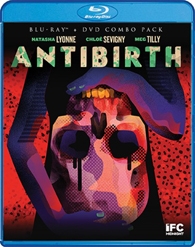 Discs mentioned in this article: (Click for specs and reviews)
Antibirth (Blu-ray)