Jack Hill's 1969 film will be speeding to high-definition in June.

In an early announcement to retailers, Arrow Video is working on 'Pit Stop' for a Blu-ray release on June 30.

The most dangerous game ever devised, to pit man against man, flesh against steel - the figure-8 race! Jack Hill (Coffy, Foxy Brown) follows up Spider Baby, once again teaming up with Sid Haig (House of 1000 Corpses) in one of his greatest roles for this action-spectacular crash-o-rama!

Richard Davalos (East of Eden) stars as Rick Bowman, a street punk who winds up in jail after a street race goes wrong. Bailed out by race promoter Grant Willard, Davalos is put in the deadly track where he comes up against Haig's maniacal winner Hawk Sidney. Featuring an outstanding supporting cast including Brian Donlevy (The Quatermass Xperiment) in his last film appearance, Ellen Burstyn, billed as Ellen McRae (The Exorcist), and Beverly Washburn (Spider Baby), Pit Stop is one of Hill's lesser known films but arguably his greatest.

Filmed on a real figure-8 track, Hill and his crew were able to capture gripping real-life car wreck scenes lending the film a brilliant sense of realism. You've never seen a motion picture like this before - can you take it?

You can find the latest specs for 'Pit Stop' linked from our Blu-ray Release Schedule, where it is indexed under June 30. 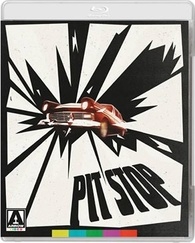