The black comedy starring Ron Perlman and Rupert Grint is planned for Blu-ray this February.

In an early announcement to retailers, Alchemy is preparing 'Moonwalkers' for Blu-ray on February 23.

What if Apollo 11 never actually made it? What if, in reality, Stanley Kubrick secretly shot the famous images of the moon landing in a studio, working for the US administration? This is the premise of a totally plausible conspiracy theory that takes us to swinging sixties London, where a stubborn CIA agent (Ron Perlman) will never find Kubrick but instead is forced to team up with a lousy manager (Rupert Grint) of a seedy rock band to develop the biggest con of all time.

You can find the latest specs for 'Moonwalkers' linked from our Blu-ray Release Schedule, where it is indexed under February 23. 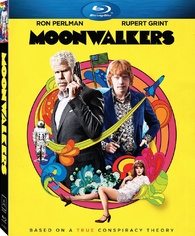