'Virtuosity' and 'The Cell' Bound for Blu-ray in July

Two 90s sci-fi flicks are heading to Blu-ray in July.

In an early announcement to retailers, Warner Bros. is preparing 'Virtuosity' and 'The Cell' for Blu-ray on July 7.

'Virtuosity' - Two-time Oscar® winner Denzel Washington and Oscar® winner Russell Crowe square off on opposite sides of the law and on both sides of reality in this action-packed cyber-age thriller from the director of The Lawnmower Man. Crowe is Sid 6.7 – Sadistic, Intelligent, Dangerous. He's a composite of some 200 personalities, each and every one a notorious killer. A virtual reality creation designed to put L.A. police officers to the test. But Sid isn't playing games anymore. He's escaped the bounds of cyberspace and is able to take a licking because he can regenerate his silicon-based body parts. Washington is Parker Barnes, a Los Angeles cop who once took the law into his own hands…and now carries the fate of the city in them. His job is to shut down the virtually unstoppable Sid. Virtuosity – it's the ultimate battle of bits and bytes, in the world of flesh and blood!

Supplements have not been detailed but the Blu-ray will feature 1080p video and a DTS-HD MA 5.1 soundtrack. 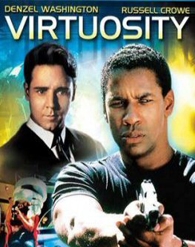 'The Cell' - In this science fiction thriller, child psychiatrist Catherine Deane (Golden Globe-nominee Jennifer Lopez "Selena," "Maid in Manhattan") has developed a technique that allows her to travel through the minds of her patients. When Stargher (Emmy Award-nominee Vincent DOnofrio TV's "Law & Order: Criminal Intent," "Full Metal Jacket"), a serial killer who methodically drowns his victims and performs bizarre rituals with their bodies, falls into a coma, FBI agent Peter Novak (Vince Vaughn "Wedding Crashers," "Dodgeball: A True Underdog Story") asks Deane to enter the killers psyche in hopes of finding the location of a missing girl whom Stargher has kidnapped and, if she isn't found soon, will drown in her torture cell. However, once Deanne enters the bizarre world of Starghers mind, she finds getting out being a very difficult matter.

The Blu-ray will feature 1080p video, a DTS-HD MA 5.1 soundtrack, and supplements will include: Commentary with Director Tarsem Singh; Featurette Style As Substance: Reflections on Tarsem; Deleted scenes; and Theatrical Trailers. 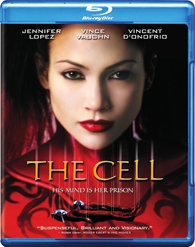 You can find the latest specs for 'Virtuosity' and 'The Cell' linked from our Blu-ray Release Schedule, where they are indexed under July 7.

Discs mentioned in this article: (Click for specs and reviews)
The Cell (Blu-ray)
Virtuosity (Blu-ray)