'The Ice Pirates' are Bound for Blu-ray

The cult flick is heading to Blu-ray in January.

In an early announcement to retailers, Warner Bros. is preparing 'The Ice Pirates' for Blu-ray on January 19.

Have an ice day! It’s a parched future, and water, the galaxy’s only valuable commodity, is controlled by the evil Templars. Their only foes: a handful of daring Ice Pirates. Spoofy-goofy comedy, otherworldly special effects, spectacular space creatures, bedraggled ’bots and bicep-rippling swashbuckling highlight this cult fave. Robert Urich (Vegas), Mary Crosby (Dallas), Anjelica Huston (The Addams Family) and Ron Perlman (Hellboy) romp through a storyline involving a determined princess, the search for her missing father and a lost planet awash in sweet water. The manic, concluding time-warp battle is just ice-ing on the intergalactic cake. Dig in!

You can find the latest specs for 'The Ice Pirates' linked from our Blu-ray Release Schedule, where it's indexed under January 19. 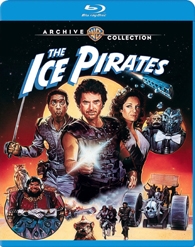 Discs mentioned in this article: (Click for specs and reviews)
The Ice Pirates (Blu-ray)