The latest season of the hit CBS comedy is coming to Blu-ray in September.

In an early announcement to retailers, Warner Bros. is preparing 'The Big Bang Theory: Season 9' for Blu-ray on September 13.

'The Big Bang Theory: The Complete Ninth Season' - which returns to CBS this fall with its tenth season - continues the saga of Leonard and Sheldon, two genius roommates who are brilliant in the lab, but socially challenged outside of it. In Season Nine, Sheldon embarks on some soul-searching adventures, no doubt entailing substantial revisions to his Relationship Agreement with neurobiologist Amy. Meanwhile, Leonard and Penny tie the knot in Las Vegas...but how this will affect the Roommate Agreement with Sheldon is anyone's guess. Meanwhile, Howard and his wife, Bernadette, are living alone in his mother's house (but not for long!), and Raj is not only able to talk with women - but finds the challenges of getting exclusive with only one, Emily (Laura Spencer). With unexpected plot twists, celebrity guest appearances, and moments of social awkwardness that often stimulate an involuntary laugh reflex, The Big Bang Theory: The Complete Ninth Season successfully melds the worlds of sitcom and science into a series that has captured the hearts of fans all over the country, and the world.

The Blu-ray/Digital HD combo pack will feature 1080p video, a DTS-HD MA 5.1 soundtrack, and supplements will include: The Big Bang Theory Gives Back; BBT: The Big 200!; Love IS Rocket Science; #Just Ask BBT: If I Had To Go To Mars...; #Just Ask BBT: Who Will Get The Couch?; 2015 Comic-Con Panel; and Gag Reel.

You can find the latest specs for 'The Big Bang Theory: Season 9' linked from our Blu-ray Release Schedule, where it's indexed under September 13. 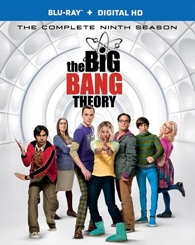 Discs mentioned in this article: (Click for specs and reviews)
The Big Bang Theory: The Complete Ninth Season (Blu-ray)