'Shameless: The Complete Fifth Season' Dated and Detailed for Blu-ray

The fifth season of the acclaimed dramedy based on the long-running, award-winning British series is headed for Blu-ray in December.

In an early announcement to retailers, Warner Brothers is preparing 'Shameless: The Complete Fifth Season' for Blu-ray on December 29.

In season five of Shameless, the Gallaghers are feeling the heat! In the swelter of another Chicago summer, Fiona (Emmy Rossum) juggles a crush on her new boss (Dermot Mulroney) with a new husband (Steve Kazee) and the return of her old boyfriend (Justin Chatwin)! Frank (William H. Macy) balances his brand new liver against that old healthy appetite for liquor, drugs and trouble. Lip (Jeremy Allen White) heads home from college and struggles to hang with his old South Side friends. Debbie (Emma Kenney) has her first real boyfriend, Ian’s (Cameron Monaghan) dealing with real health issues, and Carl’s (Ethan Cutkosky) just dealing. Personal and urban renewal runs rampant as organic coffee shops and yoga studios invade the hood, and the Gallaghers stumble toward finding out who they really are and who to truly love. Don’t miss another moment with the lovable, irreverent Gallagher gang. A stellar cast shines in all 12 seriously hilarious and heartbreaking season five episodes.

“The fifth season of Shameless continues to deliver fresh, captivating storylines, powerful acting performances and outstanding production; it’s no surprise the series has built such a loyal and devoted fan following,” said Rosemary Markson, WBHE Senior Vice President, TV Marketing. She added, “The Gallagher clan may be as unconventional as a family can ever be, but that’s what makes the show such a delight to watch. We’re excited to release another engaging season of this remarkable series with some terrific behind-the-scenes bonus content.”

Specs have yet to be revealed, but supplements include: Two Featurettes, Audio Commentary, and Deleted Scenes.

You can find the latest specs for 'Shameless: The Complete Fifth Season' linked from our Blu-ray Release Schedule, where it is indexed under December 29. 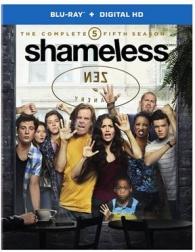