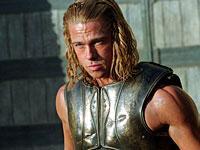 In the first example of a studio "double dipping" a next-gen title, Warner Home Video has announced a new 'Director's Cut' version of 'Troy' for release this fall on Blu-ray and HD DVD.

The theatrical cut of 'Troy' was first released as an HD DVD-only version in September of last year, and quickly became one of the format's biggest sellers.

Now, Warner will revisit the $400 million-grossing worldwide hit in the newly-expanded 'Troy: Director's Cut,' which will see a simultaneous bow on both HD DVD and Blu-ray (as well as standard-def DVD), on September 18.

Full tech specs are not yet available for the next-gen releases, although supplemental details for the two-disc standard-def DVD version of 'Troy: Director's Cut' include a new introduction by director Wolfgang Petersen, multiple making-of featurettes and more. We'll keep you posted as soon as final specs are confirmed for the high-def versions.

Warner has not yet indicated whether the existing theatrical cut edition of 'Troy' on HD DVD will remain on the market, or be discontinued in light of the new 'Director's Cut.' Stay tuned.