VIZIO has announced the addition of Google Home support to its collection of SmartCast displays, TVs, soundbars, and speakers. With Google Home compatibility and Chromecast built-in tech, SmartCast owners can now use their voice-activated Google Home speakers to control their SmartCast products.

"Controlling VIZIO SmartCast devices from Google Home is a significant milestone for consumers and their ability to manage their entertainment experience," said Matt McRae, Chief Technology Officer, VIZIO. "Using a simple voice command to stream a movie from Netflix to a VIZIO display or stream music from Spotify to a group of VIZIO speakers is an eye-opening experience and shows off the power of VIZIO SmartCast." 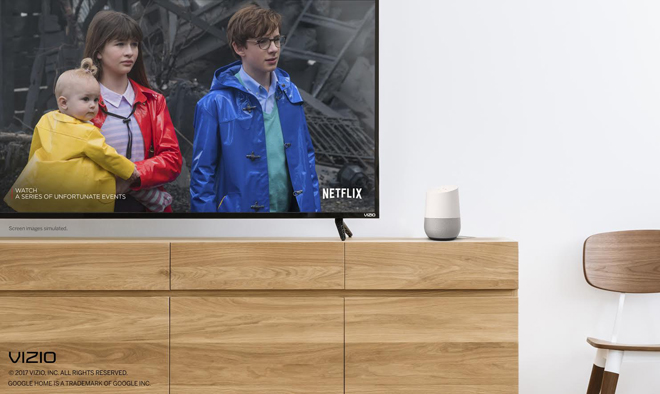 Google Home is a voice-activated speaker powered by Google Assistant. When used in conjunction with supported VIZIO SmartCast devices, customers can now speak simple voice commands to play, stop, skip, and control volume for music tracks from any Google Home supported services playing through their SmartCast products. To hear a song through a supported SmartCast speaker or soundbar, customers simply need to say, "Ok Google" followed by the music request from Google Play Music, Pandora, Spotify, and more. In addition, Google Home owners can also power on their SmartCast displays simply by asking to play content on the big screen when the "Quick Start Power Mode" option is enabled on their VIZIO SmartCast TV/displays.

Outside of new Google Home support, the VIZIO SmartCast lineup allows users to control their VIZIO SmartCast devices from any room in the home and stream content from their mobile devices straight to their big screen using the SmartCast app. SmartCast users can also search and browse content by genre across multiple apps at once. The VIZIO SmartCast app is available for download on iOS and Android smartphones or tablets, and comes preinstalled on the 2016 P-Series and M-Series Android Tablet Remotes.