The company's flagship Ultra HD HDR display series has been chosen as a CES Innovation Honoree.

VIZIO has announced that its P-Series Ultra HD display (full review here!) has been named a CES 2017 Innovation Awards Honoree. Entries are judged by a panel of independent industrial designers, independent engineers, and members of the trade media to recognize outstanding design and engineering in consumer electronics.

"We're thrilled to have the VIZIO SmartCast P-Series named as a CES 2017 Innovation Awards honoree," said Matt McRae, Chief Technology Officer, VIZIO. "The VIZIO SmartCast app, Tablet Remote and slew of advanced picture quality technologies truly is an innovative development for us.  The goal of P-Series was to bring home entertainment into the mobile era and we're proud the collection has been recognized by CTA for its advancement of the category." 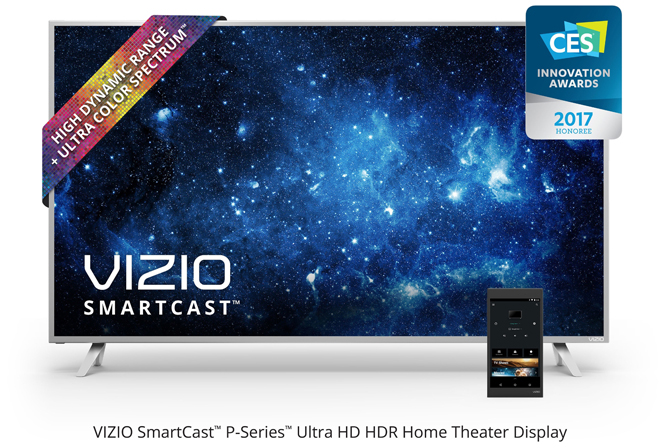 The CES Innovation Awards are sponsored by the Consumer Technology Association, the group responsible for the upcoming CES 2017 trade show. Honorees are judged on their engineering, aesthetic and design qualities, intended use/function, user value, unique/novel features, and how they compare to other products in the marketplace.

VIZIO's P-Series displays feature Ultra HD Full-Array LED panels with up to 128 Active LED Zones. Likewise, the displays offer HDR10 and Dolby Vision support for enhanced brightness and contrast in supported content -- including select streaming titles from VUDU and Netflix. In addition, the screens boast Ultra Color Spectrum for a wider color gamut. The sets also feature Chromecast built-in and include a 6-inch Android Tablet Remote preinstalled with the VIZIO SmartCast app. Instead of jumping between apps, VIZIO SmartCast lets users search and browse content by genre across multiple apps at once. The VIZIO SmartCast app is also available for download to iOS and Android smartphones or tablets, allowing customers to control any VIZIO SmartCast device from nearly any mobile device, from anywhere in the home.

The VIZIO SmartCast P-Series Ultra HD HDR Home Theater Display lineup is now available for purchase. In addition, the series will be displayed at CES 2017 on January 5-8 in Las Vegas, Nevada.