With their affordable pricing and solid features, VIZIO's P-Series has been getting quite a bit of attention from home theater enthusiasts still on the fence about 4K. The Ultra HD TV line places an emphasis on picture quality without breaking the bank, fully bringing 4K technology to the mainstream.  But just how good do these sets look in person? Has VIZIO really found the perfect balance between cost and performance? Well, High-Def Digest was recently invited to the company's P-Series Launch Event where we were treated to several eyes-on demos, highlighting different aspects of the displays -- and while a definitive verdict will have to wait until a full review, the presentation was certainly impressive.

Held at the Bertrand Delacroix Gallery in New York City, VIZIO presented its products as flat panel works of art, hanging the beautiful new TVs on the walls of the gallery like priceless paintings. And though 4K screens with full-array local dimming might not equal the majesty of a Picasso or a Rembrandt... they're pretty damn close. Each room of the gallery was charged with spotlighting different features of the TVs along with a few side-by-side comparisons with the competition. So, how did the P-Series stack up? Were these Ultra HD displays truly worthy of their place on the wall? Read on to find out!

The first demo offered in the event was dubbed "Moving Art" and was aimed at giving viewers an overall impression of the P-Series' picture quality. Models ranging from 50-inches to 70-inches were hung in the main gallery room, and each set featured nature footage shot by award-winning filmmaker Louie Schwartzberg. Schwartzberg's movies rely on a heavy use of time lapse and macro photography, and the intricate close-up footage of flowers and majestic wide shots of cascading mountain vistas really did a great job of showcasing the benefits of a 4K display. 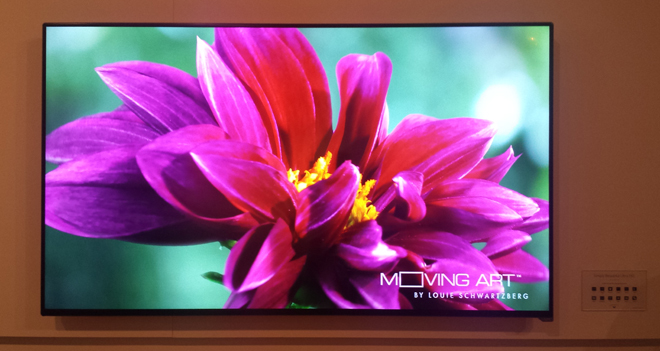 Detail was fantastic, depth was lifelike, and colors were absolutely sumptuous, giving the TVs a vivid, window-like quality. With that said, the displays were set to their default out-of-box settings, and it was clear that this pre-set was not especially accurate, leading to boosted contrast and oversaturation. Still, the images looked quite striking regardless, and managed to maintain their detail up close and personal, offering a great introduction to the collection. 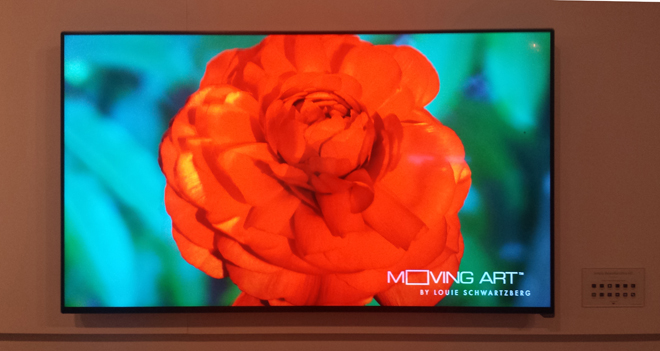 Moving from the main gallery to an adjacent room, VIZIO had two displays set up side-by-side in a demo designed to test the P-Series' Clear Action 960 motion processing and 240Hz refresh rate. On one side was the 50-inch P-Series display, and on the other side was a Samsung 50-inch 8550 series Ultra HD TV. Both TVs were displaying the same motion test slide -- which presented several horizontally scrolling patterns, words, and images. Likewise, both TVs were set to their default movie-mode settings. Based on this particular comparison, it was immediately clear that the VIZIO TV's handling of motion was superior. All of the scrolling slides moved by smoothly without any artifacts or anomalies. On the other hand, the Samsung display was riddled with odd motion artifacts and blurring. While it's likely that further adjustments in the settings would have brought out different results, and test slides aren't always indicative of real-world performance to begin with, the VIZIO certainly had an edge here. 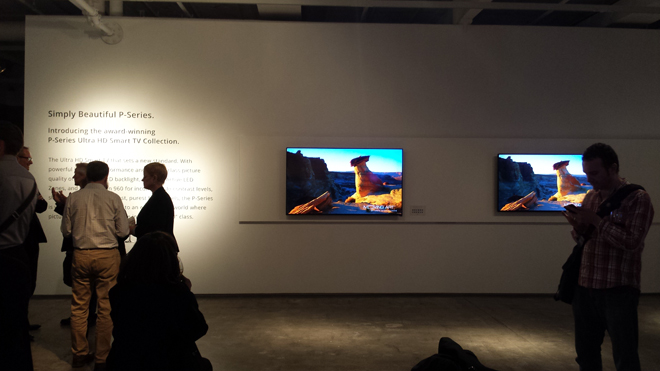 The next demo was focused on the P-Series' black levels. Once again, we were escorted to another room in the gallery, and once again the VIZIO was placed side-by-side with a Samsung 8550 display. This time, both models were 65-inches. For testing purposes, the TVs were playing back scenes from 'Harry Potter and the Deathly Hallows: Part 2,' presumably on Blu-ray being upscaled to 4K through each TV's scaling tech.

The purpose of the demo was to reveal the superior blacks, contrast, and uniformity that VIZIO's full-array LED backlight and Active Pixel Tuning can achieve. With 64 active-zones (and 72 on the 70-inch model), the panel is able to dim its backlight in specific portions of the screen based on the content being displayed. This lets black actually appear black in dark scenes. In contrast, the Samsung model only features edge-lit dimming from the sides of the screen, which offers far less precise results. 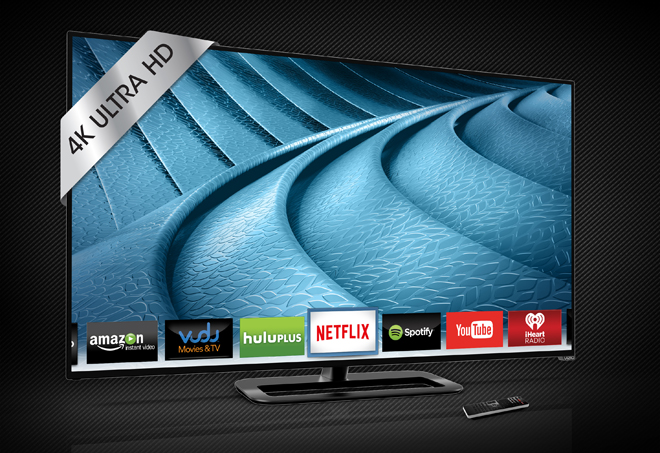 In practice, this led to some notable differences between both sets. While the Samsung appeared to have more accurate colors out-of-the-box, the VIZIO's black levels were the clear winner. Backlight bleeding was visible toward the corners of the Samsung unit, causing these portions of the screen to veer toward a bluish gray. The VIZIO, however, had essentially perfect uniformity from a central viewing position. Likewise, blacks were deep and inky and the bars on top of and below the 2.35:1 frame almost disappeared into the dark of the room. Shadows throughout the image also maintained a deep appearance without losing detail. Off angle, the TV held its own decently, but blacks and colors did wash out noticeably when viewing the screen from the side.

While the Samsung had relatively deep blacks in its own right, the VIZIO demonstrated superior contrast between dark and light portions of the picture. On the Samsung, the image had a predominantly dim quality throughout, but on the VIZIO, bright portions of the screen had more pop. For instance, one scene featured a close-up of glittering jewelry. The 8550 series TV had a dull cast, while the P-Series had deep blacks in the shadows while also maintaining a radiant sparkle on the jewels without blooming, making the most out of its precision local dimming technology. Though I've seen better overall black level performance on some high-end plasmas and OLED models, for an LCD, the P-Series was definitely toward the top of the pack.

In the final gallery room, VIZIO had a few more demonstrations focused on the different types of content available for 4K TV owners. First up, was a demo featuring the PC game 'Skyrim.' Running in native Ultra HD resolution, the game looked rather stunning, with no artifacts or aliasing. With that said, there wasn't much interactivity available, but we were able to move the mouse around the character and zoom in and out. This wasn't especially exciting, but the display certainly shows a lot of promise for gaming applications. 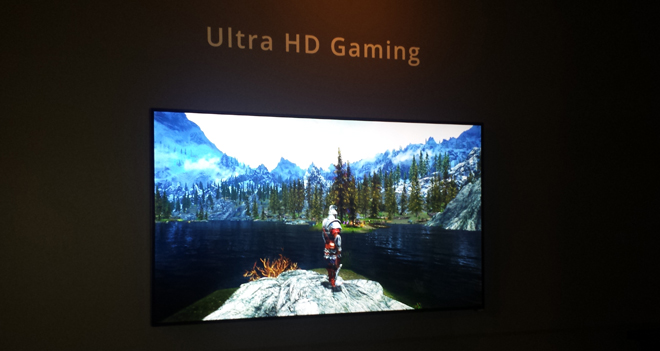 Next, was another side-by-side comparison with a Samsung model. The purpose of this test was to reveal the benefits of VIZIO's Spatial Scaling Engine for upscaling HD content to 4K. Both units were playing scenes from 'The Hobbit: The Desolation of Smaug' on Blu-ray being upscaled to 4K in each TVs' default modes. As presented, the VIZIO TV had a sharper and smoother appearance with slightly more pop. The Samsung also looked pretty good, but had a comparatively muddy appearance. In addition, there were some notable motion artifacts. These anomalies were also present on the VIZIO set from time to time, but to a lesser degree. Unfortunately, there was no direct comparison between HD material, upscaled material, and native 4K material, so I can't speak to how much of an improvement the upscaling really makes. Still, with the exception of the occasional artifacts, the footage looked impressive.

Finally, VIZIO had two 65-inch P-Series TVs set up to show off samples of 4K streaming. One TV played scenes from Amazon's original series 'Alpha House.' Despite the inaccurate settings on the display, the show looked pretty good, but I honestly didn’t notice much of an improvement over what I'm used to seeing in 1080p material on my HDTV. Likewise, it should be noted that the show was not actually being streamed live to the TV. Instead, a pre-recorded clip provided by Amazon was being played. Regardless, it was still nice to actually see an example of 4K programming that's on the way, and VIZIO customers can expect to start streaming select Amazon Instant Video content in Ultra HD by the end of the year. 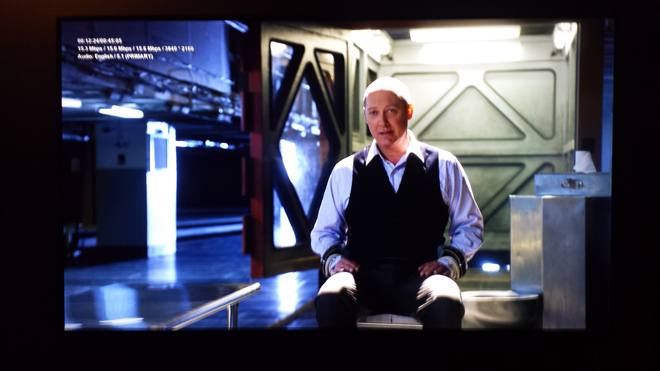 Much more impressive, however, was the demo featuring NBC's 'The Blacklist.' The show is shot natively in 4K and was being streamed live through Netflix to the television, and the results were really very striking. It's hard to make much of a judgment without a true 1080p VS Ultra HD side-by-side comparison, but the image did appear to offer an extra layer of detail not found in usual Netflix HD streams. One could make out every pore on James Spader's face and dimensionality was impeccable. There were a few odd motion anomalies here and there, but I did not detect any traditional compression artifacts usually associated with streaming video, highlighting the benefits of the new HEVC H.265 codec. The connection in the gallery was offering a steady 15Mbps, which appeared to be more than sufficient. 'The Blacklist' now joins other series available for Ultra HD streaming through Netflix like 'House of Cards' and 'Breaking Bad,' and the service will be adding more content throughout the coming year. 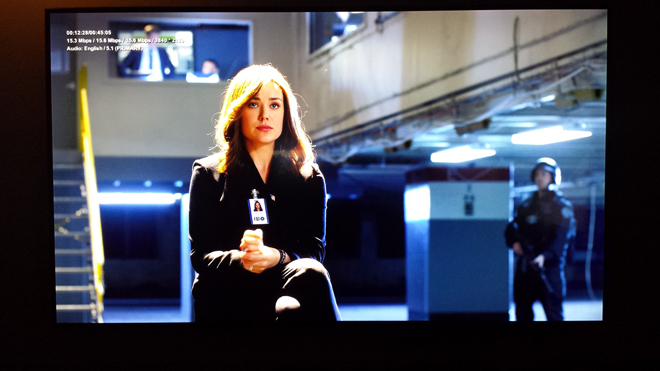 In addition to Netflix and Amazon Instant Video, VIZIO also confirmed that Ultra Flix will be available on the P-Series by the end of the year as well. Unlike other companies such as Sony and Samsung, VIZIO does not have any plans for a proprietary 4K video player, and will instead rely on existing streaming services, potential cable/satellite options, upscaling, and the upcoming 4K Blu-ray format to deliver Ultra HD content to its consumers. In order to offer the widest level of compatibility for current and future services and components, the TVs come equipped with 802.11ac Wi-Fi and HDMI 2.0 connections with HDCP 2.2 compliancy. 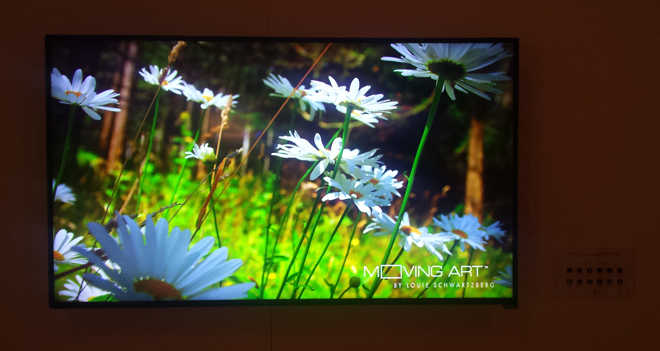 Despite our relatively brief time with the P-Series, we were left with a very positive impression. While some users might be turned off by the lack of 3D, others will likely be won over by the TVs' simplified focus on features that matter (full-array backlighting, smart TV functions) without resorting to what some may perceive as gimmicks (there are no curved-screens here… yet). For those still unsure about Ultra HD, these sets make for an undeniably attractive and affordable 4K option.

We're hoping to get our hands on a review unit soon and will report back with more details and impressions. For now, though, what do you think about VIZIO's latest Ultra HD offerings?  Are the P-Series' enticing prices and picture quality features enough for you to make the jump to 4K?