VIZIO has announced the official release of its 2018 P-Series 4K HDR lineup. The displays range in price from $899 to $2,499 and are now available for purchase from retailers like Best Buy, Costco, Walmart, Sam's Club, and Target nationwide.

The premium P-Series displays feature a three-sided bezel-less industrial design with 4K Ultra HD resolution and Active Full Array Pro tech powered by up to 120 local dimming zones. In addition, the units include support for Dolby Vision, HDR10, and HLG high dynamic range formats with UltraBright 1,000 for up to 1,000 nits of peak brightness and Ultra Color Spectrum for nearly 100% coverage of the P3 wide color gamut and about 72% coverage of the Rec. 2020 wide color gamut. Meanwhile, the SmartCast OS is used for integrated on-screen streaming apps and the ability to cast even more from a mobile device, along with voice-control support for Amazon Alexa and Google Assistant. And unlike 2017 VIZIO displays, this TV does feature an integrated tuner for OTA broadcasts with a digital antenna. Models are available in sizes ranging from 55-inches to 75-inches. 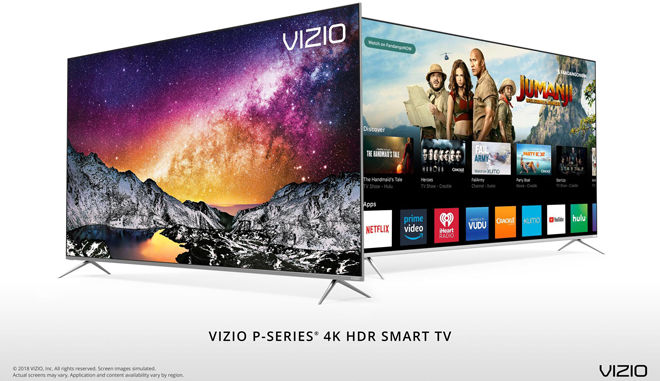 Here's a full roundup of pricing for each size:

"Picture quality technologies like Ultra Color Spectrum, Dolby Vision HDR and UltraBright 1000 enable the P-Series to take 4K HDR performance to the next level," said Bill Baxter, Chief Technology Officer, VIZIO. "Incredibly realistic on-screen imagery is complemented by cutting-edge smart TV features to round out the collection's entertainment experience. VIZIO SmartCast OS not only expands discovery and streaming options so consumers can watch content they love from their favorite apps, but also serves as an ideal centerpiece to any smart home with easy-to-use voice-control support through Amazon Alexa and Google Assistant."

Beyond the P-Series, VIZIO's 2018 lineup also include new D-Series, E-Series, and M-Series models, along with the upcoming P-Series Quantum.