'The Hollow Crown: The Wars of the Roses' Blu-ray Detailed

Shakespeare's 'Henry VI' and 'Richard III' are coming to Blu-ray in June.

In an early announcement to retailers, Universal is preparing 'The Hollow Crown: The Wars of the Roses' for Blu-ray on June 21.

These three screen adaptations, Henry VI in two parts and Richard III, tell the story of 'The Wars of the Roses', an exceptionally turbulent period in British history. Shakespeare's plays are filmed in the visually breathtaking landscape and architecture of the period. Starring Benedict Cumberbatch, Hugh Bonneville, Judi Dench, Michael Gambon, Sally Hawkins, Sophie Okonedo & Tom Sturridge, these exhilarating and emotionally charged films feature some of Shakespeare's most eloquent and powerful language.

The Blu-ray will feature 1080p video, a DTS-HD MA 5.1 soundtrack, and supplements will include: Making of The Hollow Crown; and Deleted Scenes.

You can find the latest specs for 'The Hollow Crown: The Wars of the Roses' linked from our Blu-ray Release Schedule, where it's indexed under June 21. 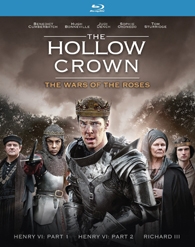 Discs mentioned in this article: (Click for specs and reviews)
The Hollow Crown: The Wars of the Roses (Blu-ray)