The 1992 family comedy will slobber all over Blu-ray in August.

In an early announcement to retailers, Universal Studios says 'Beethoven' will hit Blu-ray on August 16.

A slobbering St. Bernard dog becomes the center of attention for a loving family but its vet secretly wants to kill him.

You can find the latest specs for 'Beethoven' linked from our Blu-ray Release Schedule, where it is indexed under August 16. 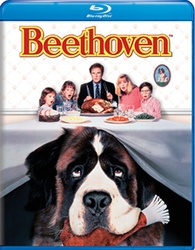