The Italian shocker will be available on Blu-ray in September.

In an early announcement to retailers, Synapse Films says 'Morituris' will hit Blu-ray on September 8.

Two lovely Romanian girls take a trip with three Italian men to a rumored midnight rave in the middle of a dark forest. As the gang proceeds on foot to their final destination, a mysterious graveyard is discovered, a shockingly vile plot twist is revealed and bloodthirsty undead Roman gladiators rise from the dead to torture and mutilate their victims! For the two women, an already terrifying night is about to get much, much worse, as the zombified warriors hunt down the group to tear their heads off! Will anyone survive the night?

Specs have yet to be revealed, but the release will include a theatrical trailer and reversible cover art.

You can find the latest specs for 'Morituris' linked from our Blu-ray Release Schedule, where it is indexed under September 8. 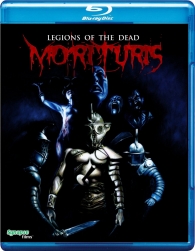