Coming Soon to Streaming: 13 REASONS WHY, JACK RYAN, and More

Netflix, Amazon Prime Video, and MotorTrend have all released new previews and info for several of their upcoming shows and films.

Green Frontier (Netflix, August 16) - Deep in the Amazon, on the border between Brazil and Colombia, a series of bizarre deaths are investigated by a young female detective, Helena. Soon it becomes clear that the murders are not the biggest mystery...but there are some secrets that are better kept in the jungle.

Sextuplets (Netflix, August 16) - Tells the story of Alan, an expectant father who grew up believing he was an only child. While searching for his birth mother, Alan comes face-to-face with a brother he never knew existed, Russell, who helps him uncover their secret status as sextuplets (all played by Wayans). Soon they begin a spontaneous road trip to track down their additional siblings, but not before Alan wonders whether exploring his roots was a huge mistake.

Hyperdrive (Netflix, August 21) - Daring drivers from around the world test their limits in custom cars on the biggest, baddest automotive obstacle course ever built.  In this new original Netflix competition series, driving prowess, mechanical ingenuity and emotional resilience will be tested in this open invitation, build and race tournament. Many will compete but there can only be one Hyperdrive champion.

13 Reasons Why: Season 3 (Netflix, August 23) - A new harrowing crime unfolds in Season 3 of 13 Reasons Why as the characters try to uncover who killed Bryce Walker. Based on the best-selling books by Jay Asher, Season 1 follows teenager Clay Jensen (Dylan Minnette) as he returns home from school to find a mysterious box with his name on it lying on his porch. Inside he discovers a group of cassette tapes recorded by Hannah Baker (Katherine Langford) - his classmate and crush-who tragically committed suicide two weeks earlier. On tape, Hannah unfolds an emotional audio diary, detailing the thirteen reasons why she decided to end her life. Through Hannah and Clay's dual narratives, 13 Reasons Why weaves an intricate and heartrending story of confusion and desperation that will deeply affect viewers.

Trinkets: Season 2 (Netflix, Coming in 2020) - When three teenage girls from different corners of the high school cafeteria find themselves in the same mandated Shoplifter’s Anonymous meeting, an unlikely friendship forms. Elodie (Brianna Hildebrand, Deadpool) — the grieving misfit, Moe (Kiana Madeira, The Flash) — the mysterious outsider, and Tabitha (Quintessa Swindell) — the imperfect picture of perfection, will find strength in each other as they negotiate family issues, high school drama and the complicated dilemma of trying to fit in while longing to break out. Trinkets is based on the young adult novel by Kirsten "Kiwi" Smith, who serves as an executive producer.

Undone (Amazon Prime Video, September 13) - A half-hour, genre-bending, animated series that explores the elastic nature of reality through its central character Alma, a twenty-eight-year-old living in San Antonio, Texas. After getting into a car accident and nearly dying, Alma finds she has a new relationship to time. She develops this new ability in order to find out the truth about her father’s death.

Transparent: Musicale Finale (Amazon Prime Video, September 27) - Takes the beloved Emmy and Golden Globe award-winning series Transparent to new heights as a dazzling two-hour movie musical fantasia. When the Pfeffermans face a life-changing loss, they begin a journey hilarious and melancholy, brazen and bold. As they face this new transition, they confront grief and come together to celebrate connection, joy, and transformation.

Modern Love (Amazon Prime Video, October 18) - An unlikely friendship. A lost love resurfaced. A marriage at its turning point. A date that might not have been a date. An unconventional new family. These are unique stories about the joys and tribulations of love, each inspired by a real-life personal essay from the beloved New York Times column "Modern Love." Starring Anne Hathaway, Tina Fey, and Andy Garcia.

Tom Clancy's Jack Ryan: Season 2 (Amazon Prime Video, Coming Soon) - After tracking a potentially suspicious shipment of illegal arms in the Venezuelan jungle, CIA Officer Jack Ryan heads down to South America to investigate. As Jack’s investigation threatens to uncover a far-reaching conspiracy, the President of Venezuela launches a counter-attack that hits home for Jack, leading him and his fellow operatives on a global mission spanning the United States, UK, Russia, and Venezuela to unravel the President’s nefarious plot and bring stability to a country on the brink of chaos.

Aaron Needs A Job (MotorTrend, Now Streaming) - Expert and custom car-builder, Aaron Kurfman, is stepping out of his comfort zone and breaking into corners of the world's car culture in a way we’ve never seen before. In a brand new Discovery Channel series available on the MotorTrend App, the only auto-dedicated subscription video-on-demand service, Aaron Needs a Job, Kurfman puts his knowledge and skills to the test taking viewers on a wild journey around the world to participate in some of the most challenging and iconic car building competitions and meet with machine-minded men and women who keep our world running. 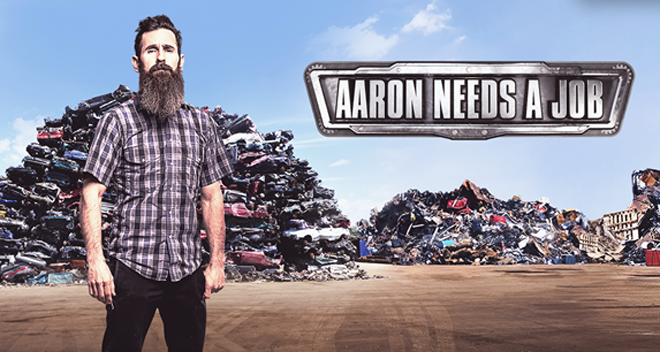