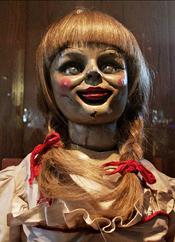 Last month we spotlighted a classic 90s thriller, a Cold War spy tragedy, and a comic book blockbuster. If you haven't already, be sure to check out the Essential Picks for November, December, January, February, March, April, May, June, July, August, and September.

This month, we're covering a spooky haunted house story, a golden age Hollywood classic with a 3D spin, and a big budget adolescent sci-fi fantasy come to life. Please be aware, that if you haven't already seen them, there might be some spoilers for the films listed.


'The Conjuring' - In a sea of thoughtless remakes and overwhelmingly gory slashers, 'The Conjuring' stands out as a wonderfully old fashioned, spooky horror flick that pays loving homage to 1970s filmmaking. But perhaps more shocking than any of the movie's plentiful thrills, is the fact that it's directed by none other than James Wan. I mean, this is the man who made 'Saw,' after all, a film that helped usher in the contemporary horror genre's increasingly unappealing fascination with "torture porn" gore and violence. But 'The Conjuring' is essentially the antithesis of that subset, and instead of blood and guts, the movie harks back to an old school sensibility marked by inventive camera work, long takes, psychological thrills, and visceral scares that show us just enough to disturb and frighten without relying on gratuitous gore.

At times the movie almost plays out like a long lost Steven Spielberg produced haunted house flick from the 70s. In fact, the film is basically the 'Super 8' of contemporary horror flicks, blending the style of the past with the technology of the present to tell a classic tale of spine tingling terror -- one that never loses sight of a heavy emphasis on character. The family at the center of the story is the real focus, and the scary antics that surround them are made all the more palpable thanks to the director and writers' heartfelt approach. We actually grow to care about the Perron family and the husband and wife paranormal investigators who risk everything to rid their home of the evil presence that lurks in the shadows. To this end, the cast is fantastic, with great turns from Patrick Wilson and Ron Livingston, and especially noteworthy performances from Lilli Taylor and Vera Farmiga. Director James Wan stages some wonderfully fun set pieces as well (the whole clapping bit is a particularly clever and amusing recipe for uneasy thrills), and he often enhances the film's tension through long, extended takes, rather than flashy editing and overbearing style.

With that said, it's actually this same emotional, "Spielbergian" focus that ultimately holds the film back just a tad. While I admire the movie's surprising amount of heart, the climax feels a little too sweet and happy for my tastes, robbing the movie of that extra little bite that would have really made it special. Admittedly, that's a pretty nitpicky qualm, however, and this really is one of the best horror flicks I've seen in a very long time. With a nice mixture of old fashioned cinematic sensibilities and contemporary practical special effects, James Wan ends up crafting a memorable and genuinely thrilling ghost story that operates on the complete opposite end of the spectrum from the gory franchise that made him famous. Effortlessly entertaining, spooky, dramatically affecting, and just a whole lot of fun, 'The Conjuring' easily takes October's number one spot, offering audiences the perfect Blu-ray to help usher in Halloween.


'The Wizard of Oz - 3D: 75th Anniversary Edition' - As a kid I went through several different obsessions with various movies, comics, and cartoon shows. Some of my earliest infatuations included the likes of Superman, Batman, the X-Men, The Ninja Turtles, and Darkwing Duck -- but the very first movie to really capture my imagination and fully take hold, was 'The Wizard of Oz.' For a period of time I was nearly fanatical about all things Yellow Brick Road. I watched the movie endlessly, I knew all the actors' names by heart, and I even had 'Wizard of Oz' action figures. Yes, you read that correctly, action figures -- not dolls. Oh, alright, I had dolls too! Everything about the film simply filled me with wonder, and to this day, the movie's joyous magic remains just as powerful as ever.

From the moment we first enter Oz and that explosion of color radiates from the screen, we are instantly transported "somewhere over the rainbow" and there is no going back. The story is timeless and full of imagination. The characters are memorable and bursting with personality (like Dorothy, the Scarecrow is my favorite too). The sets and costumes are brimming with little details and impeccable craft. The songs are catchy, beautiful, and infectiously hummable. And that Wicked Witch and her flying monkeys are the stuff nightmares are made of. Full of motion picture iconography, the film has left an indelible impression on multiple generations of viewers, and even after those ruby slippers take us home, the memory of Oz continues to put a smile on our faces. Perfect for kids without losing any of its appeal for adults, this is the quintessential family film by which all subsequent efforts are compared.

For its 75th anniversary, Warner Bros. has put together an exceptional Blu-ray package, porting over most of the comprehensive supplements from previous editions while adding a brand new 3D conversion that brings a whole new dimension to this beloved classic. As reviewer David Krauss details in his full review, this 3D presentation is respectful and lovingly rendered, providing a natural and beautiful extension to the original cinematography. Full of brains, heart, and a bit of courage, this 75th Anniversary set is a clear must own for film fans of all ages, and rightfully earns a spot on this month's essential list.

Blending a cornucopia of influences culled from anime, comic books, 'Godzilla' movies, and various other sci-fi classics, the film is an explosion of child-like creativity. And at the same time, the movie unashamedly follows and downright celebrates every tried-and-true element that defines its genre. With that in mind, between all the amazing action, the script is admittedly full of storytelling clichés and thin characterizations, and it does come dangerously close to falling victim to the same flaws that end up dooming many a Michael Bay production. But thankfully, del Toro's vision remains clear and entertaining, and he injects every aspect of the film with such gleeful enthusiasm that it becomes infectious.

While there is perhaps a faint tongue-in-cheek element to the whole affair, for the most part, the director's approach appears to be free from any real irony. This is del Toro's sincere attempt at making a film in the style and genre that he loves, and while that leaves some plotlines feeling a bit nonsensical and silly, that's simply part of the fun. With that said, there are a few elements that still seem a bit "off" to me, particularly Charlie Hunnam's performance. I've seen the actor in other productions and he's been perfectly fine, but here his approach is downright grating, with line deliveries that often sound like a terrible English dub in an anime show. I'm not sure if this approach was intentional or not, but either way, it did take me out of the film every now and then.

Despite some flaws and an overall penchant for silly excess, 'Pacific Rim' is a fanboy fantasy come to life. It's one thing to throw lots of explosions and borderline nonsensical plotlines at the screen, but it's another to actually filter them all through a skillful hand and a cohesive vision, and thankfully Guillermo del Toro does just that. This is big budget giant robots done right, and Warner Brothers' Blu-ray features demo worthy video and audio in 2D or 3D, smashing the rest of the competition to earn the last spot on October's must own list.

So, there you have it. While there are many titles worth picking up this October, those are our top three must own recommendations. We'll be back next month with three more essential picks, but for now, what do you think of our selection? What are your choices for October's must own titles?