The 2005 Motorcross film speeds to Blu-ray this spring.

In an early announcement to retailers, Starz/Anchor Bay will be releasing 'Supercross' on Blu-ray on May 5.

Two brothers, Trip and KC Carlyle, are vying to win a half-million dollars in the Las Vegas Motorcross Championship, which pits them against some of the best racers in the world.

Specs and supplements haven't been revealed yet, but the suggested list price for the Blu-ray is $17.99.

You can find the latest specs for 'Supercross' linked from our Blu-ray Release Schedule, where it is indexed under May 5. 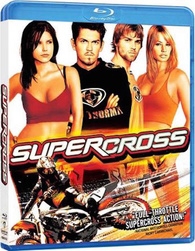