'Jane Got a Gun' Locked and Loaded for Blu-ray

The western starring Natalie Portman and Joel Edgerton will ride to Blu-ray in April.

In an early announcement to retailers, Starz/Anchor Bay is working on 'Jane Got a Gun' for Blu-ray on April 26.

Jane Hammond (Natalie Portman) has built a life on the rugged western plains with her husband Bill "Ham" Hammond (Noah Emmerich) and young daughter. When Ham stumbles home riddled with bullets after a run-in with the relentless John Bishop (Ewan McGregor) and his gang, she knows they will not stop until her family is dead. In desperation, Jane turns to Dan Frost (Joel Edgerton), a man from her past, for help. Haunted by old memories, Jane's past meets the present in a heart-stopping battle for survival.

The Blu-ray will feature 1080p video, lossless 5.1 audio, and no supplements have been revealed at this time.

You can find the latest specs for 'Jane Got a Gun' linked from our Blu-ray Release Schedule, where it is indexed under April 26. 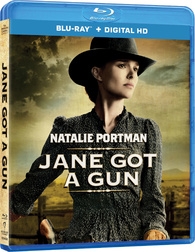