The acclaimed documentary arrives on Blu-ray in July.

In an early announcement to retailers, Sony is set to bring 'The Salt of the Earth' to Blu-ray on July 14.

For the last 40 years, the photographer Sebastião Salgado has been travelling through the continents, in the footsteps of an ever-changing humanity. He has witnessed some of the major events of our recent history; international conflicts, starvation and exodus. He is now embarking on the discovery of pristine territories, of wild fauna and flora, and of grandiose landscapes as part of a huge photographic project, which is a tribute to the planet's beauty.

Sebastião Salgado's life and work are revealed to us by his son, Juliano, who went with him during his last travels, and by Wim Wenders, himself a photographer.

Specs have yet to be revealed, but supplements include: Deleted Scenes - Over 35 minutes of beautifully-shot deleted scenes; Audio Commentary with Wim Wenders and Juliano Ribeiro Salgado; and Looking Back - Wim and Juliano reflect on the making of their film.

You can find the latest specs for 'The Salt of the Earth' linked from our Blu-ray Release Schedule, where it is indexed under July 14. 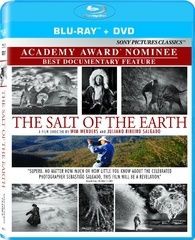