The critically-acclaimed six-part miniseries is coming to Blu-ray later this year.

In an early announcement to retailers, Sony is preparing 'The Night Manager' for Blu-ray sometime in 2016.

'The Night Manager', the thrilling miniseries based on John le Carré’s best-selling spy novel, follows hotel manager Jonathan Pine (Tom Hiddleston) in his quest to bring down international arms dealer Richard Roper (Hugh Laurie). After being recruited by a British intelligence officer to infiltrate Roper’s inner circle, Pine is thrust into a world of international intrigue – but in his quest to do the right thing, Pine must first become a criminal himself. Includes all six unrated episodes, as originally aired on the BBC.

Specs and supplements haven't been revealed yet, but the suggested list price for the Blu-ray is $45.99.

You can find the latest specs for 'The Night Manager' linked from our Blu-ray Release Schedule, where it is indexed under PENDING. 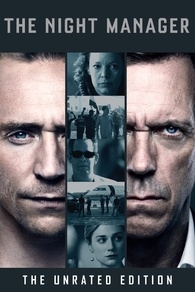