The 30th Anniversary Edition of the film starring John Cusack and Daphne Zuniga arrives in stores this March.

In an early announcement to retailers, Shout Factory is working on 'The Sure Thing: 30th Anniversary Edition' for Blu-ray on March 24.

When college student Walter Gibson (John Cusack) gets set up for a date with an incredibly gorgeous blonde (Nicollette Sheridan in her film debut), he’s ready to go to the ends of the earth — or at least across the country — to capitalize on this “sure thing.” Paired up with tightly-wound coed Alison Bradbury (Daphne Zuniga) via the campus ride-share program, he heads west for Los Angeles. But as the obstacles begin to pile up, he and Alison begin to form an unexpected bond… and soon Gib must choose between the sure thing and the real thing.

You can find the latest specs for 'The Sure Thing: 30th Anniversary Edition' linked from our Blu-ray Release Schedule, where it is indexed under March 24. 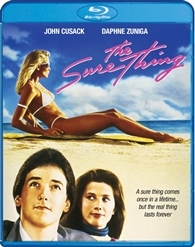