The bonus features have now been revealed for the 1991 horror flick available in stores this August.

In an early announcement to retailers, Scream Factory will be releasing 'The People Under the Stairs: Collector's Edition' on Blu-ray sometime the summer, and now the date has been set for August 11.

Wes Craven, the director of 'The Serpent and the Rainbow' and 'Shocker,' locks you inside the most terrifying house on the street. Trapped inside a fortified home owned by a mysterious couple, a young boy is suddenly thrust into a nightmare. The boy quickly learns the true nature of the house's homicidal inhabitants and the secret creatures hidden deep within the house.

You can find the latest specs for 'The People Under the Stairs: Collector's Edition' linked from our Blu-ray Release Schedule, where it's indexed under August 11. 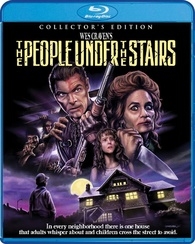