'The Doctor and the Devils' Blu-ray Announced

Freddie Francis' thriller will dig up Blu-ray in November. You can pre-order it here.

In an early announcement to retailers, Scream Factory says 'The Doctor and the Devils' on Blu-ray on November 4.

Based on Dylan Thomas' original screen play, this shocking horror-thriller stars Timothy Dalton as Thomas Rock, a brilliant young anatomy professor in 1820s Edinburgh. At first accepting only the cadavers provided him for study - those of a few hanged criminals a year - Rock eventually recruits two grave robbers (Jonathan Pryce and Stephen Rea) to secure a better supply of corpses. Coming to the gory conclusion that they will earn more the "fresher" the corpses, the two begin committing murder and delivering warm bodies to the doctor's lecture chambers. Also starring Julian Sands and Twiggy, The Doctor And The Devils brings classic chills from start to finish.

You can find the latest specs for 'The Doctor and the Devils' linked from our Blu-ray Release Schedule, where it is indexed under November 4. 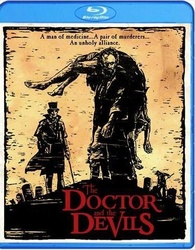