'Lord of Illusions: Collector's Edition' Manifests on Blu-ray in December

The highly-anticipated high-definition release of Clive Barker's horror flick will appear on Blu-ray in December. Pre-order your copy here.

In an early announcement to retailers, Scream Factory is preparing 'Lord of Illusions: Collector's Edition' for Blu-ray on December 16.

Scott Bakula portrays Harry D’Amour, a private detective visiting Los Angeles on a routine investigation. Harry gets more than he bargains for when he encounters Philip Swan, a performer whose amazing illusions captivate the world. But are they really illusions? Harry isn’t so sure as he is thrust into a nightmare of murder, deception and terrifying assaults from the dark beyond. Famke Janssen and Daniel von Bargen also star in this cult film classic.

The 2-disc Blu-ray set will feature both the theatrical and director's cut of the film with 1080p video, lossless audio, and supplements include Commentary by Director Clive Barker; "A Gathering of Magic" Featurette - Original Behind the Scenes Footage; Unseen Rare Behind the Scenes Footage "Illusion of Reality"; Vintage interviews and UNSEEN On-Set Footage provide a fascinating look into the making of the film; Deleted Scenes with Clive Barker commentary; and NEW Interview with Storyboard Artist Martin Mercer.

You can find the latest specs for 'Lord of Illusions: Collector's Edition' linked from our Blu-ray Release Schedule, where it is indexed under December 16. 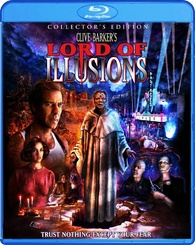