The 1986 horror starring Pierce Brosnan and Lesley-Anne Down will possess Blu-ray this August.

In an early announcement to retailers, Scream Factory is set to release 'Nomads' on Blu-ray on August 18.

They creep. They kill... and no one knows who they are or where they came from. But when these rootless, demonic spirits descend on a determined doctor, all hell breaks loose. Bitten by a dying madman named Jean Pommier, Dr. Eileen Flax becomes the vessel for his turbulent and insane thoughts. Thrust into his last days, she is shocked to discover the existence of mysterious and murderous demons on a quest for destruction... and begins her own quest to somehow stop them before she joins Pommier in his horrifying fate.

Specs haven't been revealed yet, but supplements include: New interviews with actress Lesley-Anne Down and composer Bill Conti, Theatrical Trailer, Radio Spot, and Still Gallery.

You can find the latest specs for 'Nomads' linked from our Blu-ray Release Schedule, where it is indexed under August 18. 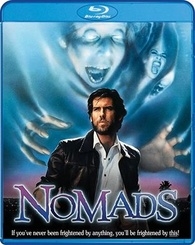